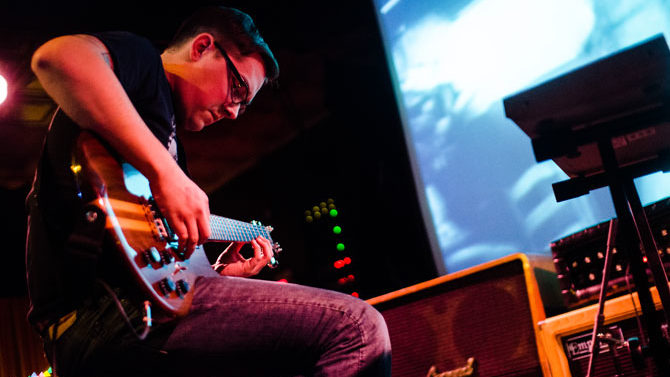 Once Bitten: Athens musician Drew Smith (Chrissakes) just tipped his alter-ego hat once more. His long running heavy ambient solo project Chartreuse just released a limited-edition cassette album titled Gloriosa Venenum Serpentis, which, as you learned in your high school freshman Latin class, translates to “glorious snake venom.” The physical copies are limited to a mere 25. But since digital just goes on and on, you can download as many copies as you want for five bucks each. The two-track, 28-minute album comes courtesy of JRS Tapes, and it’s a headphone record in the best sense. Although Smith has played these tracks live for a while—versions of which you can find on southernshelter.com—the near-holy majesty of the first song glides well into the sustained guitar echo of the second. From there, the volume drops to almost imperceptible levels before shimmering towards its close as if the music was reflected via mirrored hallway. Just do it over at jrstapes.bandcamp.com.

Come On In: Although this news isn’t strictly local, I feel like it would be both a dereliction of duty and a cold shoulder toward the home team if I didn’t give a shout out to Twin Cousins Records. Its Athens connection comes courtesy of Flagpole scribe Dan Mistich, who formed the West Virginia-based label with his brother Dave last year. So far, the pair has released two compilations, the second of which features Athens groups The Warm Fuzzies and The Eskimos. It’s titled Nothing Criminal, and came out earlier this month. The label released the Shelter EP from Athens duo Sans Abri last year. Check out twincousinsrecords.bandcamp.com, and keep up with the label’s day-to-day over at facebook.com/twincousinsrecords.

Go Early and Often: In a move that can only be construed as a band finally living up to its name, local rockers RITVALS (pronounced “rituals”) is setting up camp at Go Bar every Wednesday in April. The acts joining them are mostly pretty good, too, so catching at least one of these shows is probably gonna be worth your while. Apr. 2 features The Hernies, Sad Dads and Dude Magnets; Apr. 9, Uncle Dad, Atlanta band Shepherds and Bad Nudes; Apr. 16, Monsoon, Shade and Chicago band Ne-Hi; Apr. 23, Feather Trade and Swamp; and Apr. 30 features the newly revamped k i d s, Tennessee band Gorgeous and “Athens’ premier Joy Division cover band,” Live Transmission. Don’t call it a residency. Call it a ritual. I’m sure the band would appreciate that, and chances are good its members already thought of it, too. If inclined, bone up on their do-not-give-a-good-goddamn punk-‘n’-roll over at ritvals.bandcamp.com.

Frame Up: When you woke in a cold sweat this week and just knew you’d missed the submission deadline for the 2014 Sprockets Music Video Festival, you were totally bummed. Well, you’re in luck, because this is the game that moves as we play. The new early deadline is Apr. 15, with a submission fee of $25, and the late deadline is Apr. 30, with a submission fee of $35. Anyone anywhere is eligible to submit videos, but if you’re a Georgia-based filmmaker, you get a two-for-one deal by which your music video is eligible for both the Georgia Music Video Show and the Sprockets Music Video Show for a single entry price. The Georgia Music Video Show is Friday, July 18 at Ciné, and the Sprockets Music Video Show is Saturday, July 19 at the 40 Watt Club. Volunteers are also needed, and this is a killer way to get involved in the local and state-wide film industry. Drop a line to sprockets@filmathens.net if interested, and for all other information see sprocketsmusicvideofestival.com.

Two for Flinching: The duo known as Crazy Hoarse, composed of longtime extreme and experimental progenitor Killick and his partner in crime John Norris, has released its first full-length studio album. Killick handles guitar, and Norris take cares of the drums. It’s titled Your Cheatin’ Heart Sutra, and follows a string of album-length live recordings the group has done over the past year or so. Although I’ve never been totally onboard with its punny name or the sly jokes that pepper the track titles, I will attest with every ounce of enthusiasm I can to the quality of tunes the group delivers. Self-billed as “acoustic Appalachian trance metal,” this is easily among the most listener-friendly music Killick has done in the past decade. While it no doubt scrapes the teeth of the experimental sphere for which he’s known, there are plenty of aural touchstones to keep the newly induced well-grounded. The album was recorded by Jesse Mangum at The Glow Recording Studio last fall, with additional recording by Killick himself and mixing by both. Several notable guests populate the eight-song record, too, but space is short, and I just really want to tell you to get over to killick.bandcamp.com as soon as you can and press play.