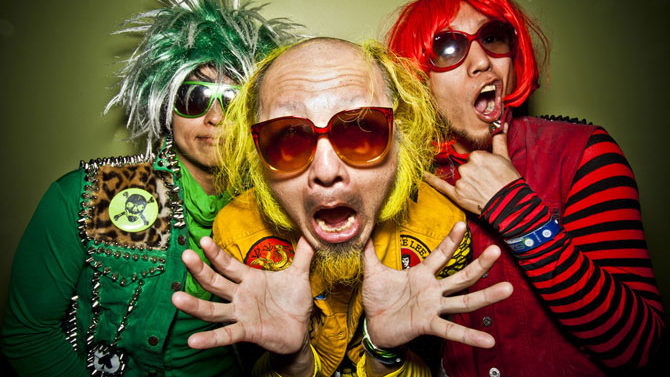 Pass the Duckets on the Left Hand Side: The organizers behind the Athens Slingshot festival have been heating their irons in a pretty hefty fire. As announced on Homedrone Monday, Kai Riedl and Eric Marty-led event will feature performances from Peelander-Z (as part of a whole showcase of Japanese bands), Circulatory System, Kishi Bashi, West African rockers Tinariwen, comedian Doug Benson, a DJ set by Washed Out, TED Talk veteran Onyx Ashanti and more to be announced. Tickets for the event, which runs March 19–22, are $25, and more info can be had over at slingshotathens.com.

Crinkle, Crackle: Beautiful noise repository Scab Queen, the ongoing concern of Michael Lauden, is releasing a split cassette tape with Atlanta’s much more straightforward synth ‘n’ drums outfit Snowbride, featuring scene veteran Drew Haddon. I’ve not yet been privy to the new sounds coming from Scab Queen’s camp, but Lauden says they’re “different.” To which I say, “I certainly hope not very.” Because Scab Queen is already pretty damn good. For more information on the new split release you can stare at the very bare persistentmidnight.tumblr.com and wish in one hand. For all your other needs, see scabqueen.bandcamp.com.

Pretties For You: Hot Fudge, the heavy Athens band with a decidedly pop-psych edge, uploaded a single last week in anticipation of its show with Faster Circuits, and it just so happens that Derek Almstead of Faster Circuits was the one who recorded and mixed the thing. In fact, he did the whole to-be-released Hot Fudge album, which was placed between my ears under promise of secrecy, so I can’t tell you where to find it. But I can tell you that it’s full of twin guitar attacks (including that thing where they make one sound like a sitar) and loads of 1970s-isms and, generally speaking, glammy in an artsy Alice Cooper way. Those descriptors apply to the album as a whole, though, and not specifically to the single, “To Be One Ask One,” which takes its cues more from Cheap Trick than anything else. You can check it out on Homedrone.

Point-N-Shoot: Remember back in 2008 when former Flagpole scribe-turned-filmmaker Marc Pilvinsky released the live Jucifer DVD, Veterans of Volume: Live with Eight Cameras? Well, homeboy is at it again, and will be filming the deadly duo’s show at the Caledonia Lounge on Feb. 6. (See story here.) You can get in on the action, too: The band says, “A certain number of fans who can bring their own cameras will get free admission,” plus a free copy of the aforementioned DVD. I have no idea how many they’ll let in for free, though, so don’t ask me. Pilvinsky says if your camera can shoot “24fps and 1080p,” then drop him a line via marcpilvinsky@gmail.com.

Bean Here, Bean There: Nicholas Mallis has thankfully dropped the Yo Soybean name for his space-surf/spaghetti-western-pop project and decided to just go with his birth name. He’ll make his live debut under this moniker Friday, Feb. 7 at the Flicker Theatre & Bar; Timmy Tumble is also on the bill. Rounding out Mallis’ band are Jason Ritter on drums, Rick Catanise on bass and McKendrick Bearden on guitar. Yo Soybean had established itself as a folky/Americana-ish outfit, but the style of the band shifted dramatically during its time and, recognizing this, Mallis decided to drop it all together. So throw up some thanks, because it was an awful name even during the best of times. The first track from the group is titled “Moonrise,” and you can find it streaming on Homedrone.

Last Exit: Quite possibly my favorite local dark horse of the past several years, Junker, has released a live album named Skeleton Music. Bandleader Stephen Brooks, also a visual artist, has zero qualms about letting his music occupy just as much space as it needs. So, you’ve got songs that are over seven minutes long right alongside three-minute statements. Although you could very easily (if ham-fistedly) categorize this music as Americana, I’ve always felt that term was just too restrictive and predictable for Junker. There’s something very dark and yet necessary about Junker that each listener has to grab on to and interpret for his or her own self. In other news, Brooks reports that he already has another whole album’s worth of songs, and the band will head back into the studio soon. For more information, see facebook.com/junkerband, and go explore the music at junkerband.bandcamp.com.