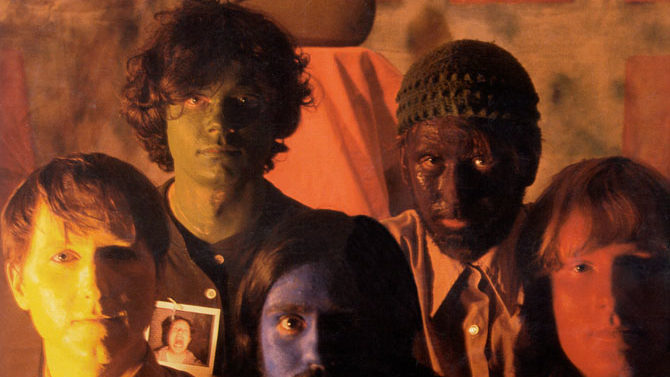 Hello, everyone. Since this is Thanksgiving week and all that, I want to take this moment to feel feelings and sincerely thank every one of you who actively contribute to the Athens music scene. You could be a musician, promoter, graphic artist, club owner, publisher, party-thrower, audience member, record-buyer, radio DJ, studio mogul, upstart upsetter, punk, mod, rocker, rapper—whatever. Thanks for all you do all year long. You are the true power of this thing we call “the scene,” and I couldn’t be happier to know you. Happy Thanksgiving, y’all!

Happy New Year: The fine folks (well, folk, really) at Chunklet Magazine—namely, the one and only Henry Owings—will release the Olivia Tremor Control‘s Peel Sessions in very short order. Pre-orders are being taken now via chunklet.com and will ship no later than mid-January 2014. These live sessions were cut for the legendary John Peel‘s radio show, broadcast by England’s BBC Radio 1, on Mar. 18, 1997. (The band’s debut album, Dusk at Cubist Castle, was released the previous year.) The eight-song vinyl album is pre-selling for only $14.99, and fans should jump on this soon before grubby, hoarding record collectors get their poisonous paws all over it. Time was that the release of a new round of Peel Sessions recordings was cause for major, or at least minor, celebration practically no matter who the artist. The release of these recordings falls solidly into the former category.

I Blinked and Missed It: OK, first, it’s bad enough that I completely blanked on ever listening to Country Fried Rock Compilation Vol. 1. to Benefit Nuçi’s Space, released back in May 2012. I’ve now also missed the boat on the follow-up, which came out this past September. Vol. 1 features tracks from Dreams So Real, Betsy Franck, Dodd Ferrelle, Dangfly!,The District Attorneys and some other local and non-local artists. The recently released Vol. 2 ups the ante considerably with the inclusion of the Chickasaw Mudd Puppies, Adam Klein, Matt Hudgins, Old Smokey, The Burning Angels, Jack Logan & Scott Baxendale, Shonna Tucker & Eye Candy and many more, plus a slew of different packages available when purchasing (handmade artwork, a baby onesie [?], etc.). These compilations were coordinated by the Florence, SC-based “Country Fried Rock” radio show and website run by longtime DJ and American music enthusiast Sloane Spencer. Visit the tunes at countryfriedrock.bandcamp.com, and get more information on Country Fried Rock itself at countryfriedrock.org.

History Book: This week’s Athens Internet wormhole comes courtesy of YouTube user, former Athens scene participant and current public broadcasting digital strategist Jason Parker. I’m continually amazed that anyone in the pre-digital era ever remembered to bring a camera anywhere, much less a video camera, but Parker did, and we can thank him for this. He has uploaded a 1993 performance by Spawn (the band that immediately pre-figured Elf Power and featured Andrew Rieger and Raleigh Hatfield) at the Tibbetts Street Rock Fest (a preview of which ran in that week’s Flagpole and noted, “It will be a bloody drunken rock fest, find out for yourself.” Ah, the ’90s. Cute!); a 1994 clip of the Olivia Tremor Control playing at old Athens venue The Shoebox where the crowd conversation is almost louder than the band; a couple of songs from grungy hairballs Dementia 13/Gamut; and several clips of very early Elf Power circa 1994. So, if you’re inclined, head to youtube.com/thejasonaut and dig it.

Stay Gold: Athens-transplant indie rockers Little Gold spent last week doing a string of shows up the East Coast, hitting Philadelphia, Brooklyn and both Richmond and Harrisonburg, VA. Some Little Gold lineup changes have happened over the past couple of years, and the group is now composed of the longstanding Christian DeRoeck along with Brandon Page, Chase Merritt and Taylor Chmura. If you’re cassette-tape-oriented, you can pick up a copy of the band’s A-plus-titled Jesus & Mary Cheney, which was recorded at DeRoeck’s home studio Cookie Road and released on his label Loud Baby Sounds at loudbabysounds.com. I’d recommend heading into the wayback machine and checking out 2011’s Weird Freedom at littlegold.bandcamp.com, too.

It’s time again for musicians, gift givers and the pocket-moneyed curious to head down to Nuçi’s Space for the nonprofit’s semi-regular ReWired gear sale, happening Saturday, Dec. 7 from noon–4 p.m. All sorts of musical gear will be sold, including drum kits, guitars, effects and sound processors, cables, school-band instruments and more. If you’re looking to donate equipment that Nuçi’s can sell, now would be a great time to do so. Word is there’ll also be a whole bunch of vinyl records for sale, too, so to twist a phrase, if you can’t be a musician, be a musician’s supporter. All sales take place at Nuçi’s Space itself. For more information, see nuci.org or facebook.com/nucisspace.