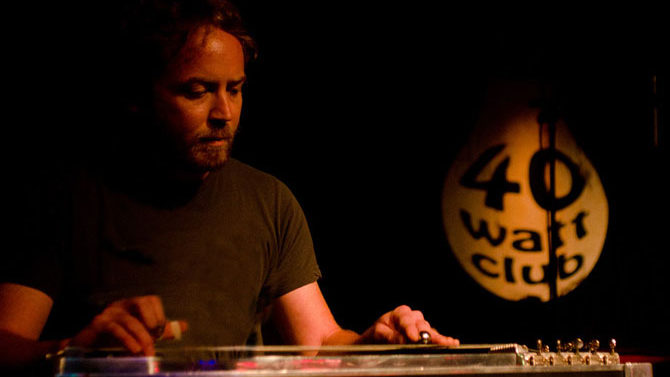 Just In Time For Winter: Filmmaker Joe Chang presented the Athens premiere of his film Present last week at Flicker Theatre & Bar. The 83-minute feature stars Elephant 6 musician Nesey Gallons as a house-show-playing performance artist who takes a few days off in Asheville, NC and, through a series of events, is inspired to take a nostalgic road trip to Mount Airy, NC with his sister and her friend. Those are the ice-cold facts, but the film itself is much warmer than I have room to describe, and quite good-looking, to boot. Hat tip goes to Gallons for wearing an Orange Twin hoodie in various scenes. The film is for sale on DVD for $15; you can order it, peep the trailer and get more information over at ithappenedonehalloween.com.

Heavy Is As Heavy Does: Guitarist and vocalist Matt “Pistol” Stoessel has a new outfit named Buffalo Hawk with bassist Brantley Senn (Dead Confederate), drummer Jim Wilson (GOAT, Moths) and keyboardist Paul McHugh (Pilgrim). The group played its live debut this past August, and its next gig is slated for Thursday, Oct. 17 at the Caledonia Lounge. I’ve been streaming a recording of their debut show courtesy of Southern Shelter, and while I totally missed it when it happened, I can imagine one could get a totally clean shave from the air surrounding these ultra-sharp and super-heavy tunes. Think Neil Young if he had grown up as a fan of everything that came after him. Hot stuff, indeed.

Am I My Brother’s Keeper?: UGA’s Black Theatrical Ensemble will present a performance of Rhyme Deferred Friday, Oct. 18–20 at the Seney-Stovall Chapel. This performance of the Kamilah Forbes-written play is directed by Scotty Gannon. The title is a nice modernization of Langston Hughes, and the show features DJs, b-boys, rappers and more in a storyline that includes a Cain and Abel-esque plot element and asks whether hip hop is all about flash, or if there is a deeper meaning that should be pursued. Tickets are $5 for students and $7 for the general public. Showtimes are 7 p.m. (Oct. 18 and 19) and 2:30 pm (Oct. 20). For more information, see facebook.com/UGABlackTheatricalEnsemble or follow the ensemble on Twitter via @ugabte.

Can’t Lick ‘Em: It’s been a very busy year for the boys in Dead Confederate. In addition to singer and guitarist T. Hardy Morris releasing his debut solo album to much acclaim and the aforementioned Buffalo Hawk gaining steam, the band released its newest album, In the Marrow, in April. The darkly engaging album is among Dead Confederate’s strongest work to date, and is easily the one I’d go to first when introducing someone to the group, which will hit the road this November. The tour kicks off with a hotly anticipated Halloween-night party spearheaded by Model Citizen Salon at Stan Mullins‘ warehouse on Pulaski Street. The event, titled “Heads Will Roll,” is a benefit for Community Connection. Tickets are $10 in advance at Model Citizen and $15 at the door. The show also features The Powder Room and a whole bunch of local art. Dead Confederate will then head on to Kansas and Colorado, play a whole pile of shows in Texas and end up in Louisiana. Keep up with everything via deadconfederate.com.

Wind, Wings, Etc.: There’s a new thing happening for all you parents who have no idea what to do with your kids on a weekend morning. It’s called the Saturday Morning Club, and it’s hosted by UGA’s Performing Arts Center. Designed for children between 4 and 12, the program gives attendees a peek inside the sometimes-mysterious world of music creation. There are live performances, refreshments and, in a hilariously touching bit of genius, an interactive Instrument Petting Zoo. The first occurrence of the SMC happens Saturday, Oct. 26 at 10 a.m., when the featured performers will be the UGA Wind Symphony. Subsequent events happen Mar. 22, 2014 (with the UGA Percussion Ensemble) and Apr. 26, 2014 (with the UGA Hodgson Singers and Friends). All events happen at Hodgson Hall at the PAC complex. Tickets are $6 for kids, $10 for adults (or $14/$24 for all three) and can be obtained by calling the box office at 706-542-4400 or looking online at pac.uga.edu.

Bits-n-Bobs: SJ Ursrey’s fundraising campaign for her first album with Honeychild was successful this past August, and you can hear the results at the release show coming up Nov. 2 at Hendershot’s Coffee Bar… Mark your calendars for the Lickskillet Artists Market & Festival happening at Lyndon House Arts Center Saturday, Oct. 26 (more info coming next week! Lots of music with this one!)… Athens Intensified (disclosure: my thing that I do) is coming up quickly, Oct. 25–26. All info is at facebook.com/athensintensified… Dictatortots are doing a residency at Hendershot’s all month long, playing each Wednesday from 6–9 p.m., except on Halloween, when they play at 9:30 p.m. Each occurrence features a “unique mountain theme.” Presumably, they mean stylistically, but watch your back just in case.