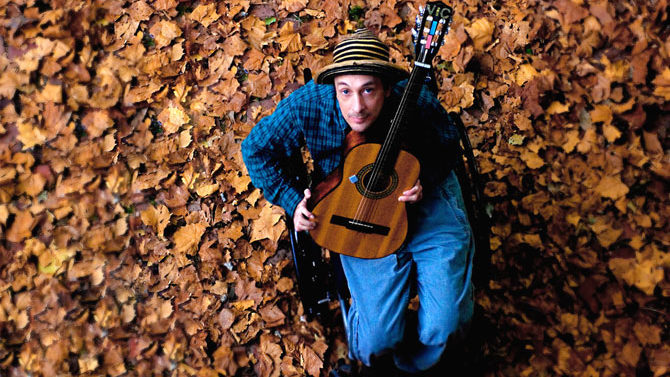 Ah, fall in Athens. That wonderful season of jaywalking, public nuisance and the general apprehension that comes from a low-boil sense of mayhem, excitement and confusion. Sounds like rock and roll to me. Speaking of which, look below for this week’s news, tips and other hoo-ha. Thanks for stopping by…

It’s Time The Tale Were Told: It’s that time of year again where I have to balance my excitement with some journalistic integrity and let you know about the lineup for this year’s Athens Intensified event. (Full disclosure: this event is conceived, assembled and executed by yours truly. But this is also totally legit news.) This year’s event is a two-day affair, happening Friday, Oct. 25 and Saturday, Oct. 26 at the Caledonia Lounge. The twin themes are “Get Up On Yr Feet” (Friday) and “Get Down In Yr Head” (Saturday). To this end, we’ll have legendary bassist and world-traveling DJ Andy Rourke (yes, from The Smiths), up and coming Sugarcubes-channelers Tonda, wham-o party engineers Programs, new favorites Monsoon and mixmaster murk daddy flex, all on Friday. Saturday will feature a headlining set from Maserati, preceded immediately by Chicago psych-Kraut blasters Cave, the always heady TaterZandra and Atlanta’s most thoughtful revolutionaries Georges Bataille Battle Cry, plus one more TBA. Friday costs $15, Saturday costs $10 and a full weekend pass to everything is only $20. Tickets are on sale now at athensintensified.com and Wuxtry Records downtown. For ongoing updates, head to facebook.com/athensintensified.

One of the greatest, and I suppose potentially worst, things about the Internet is that it provides an inexpensive platform for pretty much anyone to talk about whatever they want for as long as they want with very little gatekeeping to stop them. For music fans, this has proven an invaluable resource for oddities, rare tracks and previously unearthed information about our favorite artists. This week’s surprise treasure trove comes in the form of a blog named Debriefing the Music and Art of Vic Chesnutt. In a post made last week, blog owner Charles Fontaine of Wise, VA posted a lovingly assembled collection of exceedingly rare live Chesnutt recordings, but it appears to have been taken down already. From what I can tell, it seems like a matter of bandwidth limitation, and it will hopefully be up again soon. Seriously, though, that’s a tiny matter to worry about, because fans will be thrilled when they dig into Fontaine’s archives and read the long posts about Vic, including rare interviews and live versions and demos of various tracks. Take an evening and dig deeply over at debriefingthemusicandartofvicchesnutt.blogspot.com.

An A In The School Of Life: Multi-instrumentalist T.S. Woodward continues to put together his album, and he was particularly excited last week about the release of his single “Blue Ribbon.” I wish to God I could tell you what it sounded like, but the preview video posted to Vimeo wouldn’t load for me after trying it for over 10 minutes—which is basically 10 years in Internet time—and the song doesn’t seem to be posted anywhere else (UPDATE: the video seems to be working now). However, assuming Woodward hasn’t changed his style too much, I’m sure it sounds like his theatrical piano-and-guitar pop that generally pleases with its psychedelic flourishes. To wit, check out his EP from last December over at tswoodward.bandcamp.com. The full album itself won’t be released until spring 2014, because it’s also Woodward’s thesis project for his interdisciplinary degree in Popular Music Composition, so he’s waiting until he graduates to release it. As we all know, this is exactly what Elvis studied in school, so it’s mortarboards off to Woodward as he finishes this project. Keep up to date with his happenings at facebook.com/tswoodwardmusic.

Two Nights To Remember: There will be a two-night tribute show at the Caledonia Lounge on Friday Sept. 27 and Saturday, Sept. 28, honoring and remembering the lives of Jon and Herb Guthrie. Each were lifelong musicians and years-long contributors to the Athens music scene. Jon passed away in 2009, and his uncle Herb passed in June of this year. Titled “Still Living The Dream,” the two shows are all-ages and will feature performances by SHEHEHE, Free Mountain, Karbomb, Burns Like Fire, Thunderchief, Cody Stalvey, Stonekids, Goldwing, Monsoon and The Athens Band. Proceeds from these shows will benefit the family of Athens music scene regular and friend-to-many Nichole Mikko-Causby, who recently passed away from an inoperable brain tumor. Hug your friends today, y’all. I know it sounds sappy, but do it.

Premonition Listen: Elf Power is playing a special early release show for its 12th album, Sunlight on the Moon, Saturday, Sept. 21 at The World Famous. (Read our Q&A with frontman Andrew Rieger.) The album is a split release between California label Darla and hometown hero Orange Twin. Fans will have the opportunity to purchase both vinyl and CD copies at this show, and the band plans to perform the album in its entirety. k i d s is also on the bill, and doesn’t that just make the whole thing a little more special? Tickets are $7 in advance but $10 at the door, so save some bucks and head to theworldfamousathens.com and make plans.