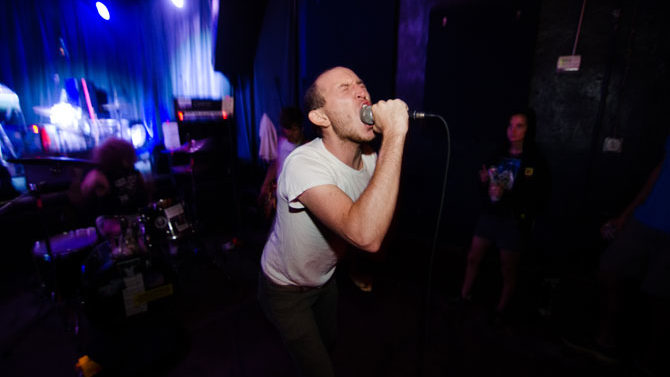 Sweat It Out: The hotly anticipated annual summer bash SlopFest is upon us again. Taking place, as usual, at Little Kings Shuffle Club, this year’s weekend of “BBQ, booze and bands” takes place Thursday, July 25 through Saturday, July 27. Each night begins at 7 p.m. and will run you a mere five bucks a night. Patrons’ hearts should swoon at the sight of Muuy Biien, Pale Prophet, The Powder Room, The Rodney Kings, Wade Boggs, Monsoon, Grape Soda, Taterzandra, Slaw and Order and many more. Dance parties wrap up Friday and Saturday nights with DJs Lozo, Lord Bitter, Goodie Bags and Mahogany. See this week’s article here. For ongoing information, see facebook.com/slop.fest.7.

Tell Me Something Good: Jared Collins of k i d s is pulling a rabbit out of what looks like the old Mercer West magic hat and hosting an open mic night each Monday at Go Bar until October. That’s right, just about 10 more weeks of radical shenanigans each Monday night. When pressed for details, Collins told me, “[People] just show up. It’s total anarchy.” What this means is that this event is wide-open with no sign-up required, which someone with less savoir-faire might make mandatory. The call is open to, in Collins’ words, “Musicians, poets, public speakers, time travelers, winners, losers, wannabes, anybodies, somebodies and everybodies.” So, just show up.

All Kidding Aside: In related news, aforementioned beautiful Birdhouse Collection people k i d s are heading out on tour with Jacksonville, FL pop heartbreakers Black Kids. By the time you read this, they’ll have done a trio of shows together before taking a break and gearing up for several East Coast shows next month. Word on the street is that k i d s will be trying out a completely new sound—again!—but won’t reveal it to Athens until they get back home. So hold your breath, super-fans. For information, you can try thebirdhousecollection.com.

More Than A Mouthful: The Ogden, UT-based Interdisciplinary Society for Quantitative Research in Music and Medicine will host its second annual conference at the Hugh Hodgson School of Music at UGA Friday and Saturday, July 26–27. The event is described by its organizers as an attempt to “explore the unanswered questions regarding the efficacies of all forms of music on the human body, mind and soul.” In addition to 20-plus panels and speakers, the event will feature live performances by Spirit Grass (Friday, 8 p.m.), The Athens Master Chorale (Saturday, 1 p.m.) and Brazilian musicians Carlos H. Costa and  Joana Christina Brito de Azevedo (Friday, 4 p.m.) All performances take place in the school’s Edge Recital Hall. There’s no question anymore about the healing properties of music, or its effect on the physical and psychological well-being of a person. There is, however, a mountain of questions regarding why every academic organization has to employ a billion words in its title and render its initials a meaningless mush of unmemorable letters. See for yourself, and get more information on the conference and the ISQRMM, via facebook.com/ISQRMM and Isqrmm.org.

Vinyl Frontiers: Vespolina released the LP version of its latest full-length record a couple of weeks ago. Titled Ribbon Chaser, the album features a really good hunk of songwriting that could easily be filed somewhere alongside Jackson Browne and Graham Parker. Stream it at athensvespolina.bandcamp.com, and visit the band at facebook.com/vespolina. From the other side of the devil’s highway comes the new 7-inch single by Shaved Christ. Appropriately named Bad Mind, it’s got five tracks of the band’s telltale semi-trad hardcore. You know, after seeing the band live so many times over the years, I can honestly say they’ve never sounded better than they do right here. Hell of a calling card, fellas. Stream it at shavedchrist.bandcamp.com and check local stores for physical copies.

Lights All Night: The buzz went ‘round the world last week when details about the new Elf Power album were announced. The record is called Sunlight on the Moon, and it was recorded in multiple locations, including band founder and frontman Andrew Rieger’s home studio and Gypsy Farm Studios in Lavonia, GA as well as Jesse Mangum’s The Glow Recording Studio outside Athens. Several of the songs were recorded as they were being written at Rieger’s house, with Andrew playing all the basic tracks. Then the band filled in with their contributions on those songs and recorded the rest of the songs during sessions at The Glow Recording Studio. Employing a shifting lineup throughout most of its existence, the band now consists of Rieger, longtime collaborator Laura Carter, James Huggins (of Montreal) and Peter Alvanos. Elf Power will tour with Neutral Milk Hotel this October, which is totally great, because the record comes out Oct. 1. It’s a split release between California’s Darla Records and the band’s own home, Orange Twin Records. Follow along at www.elfpower.com and facebook.com/elfpower