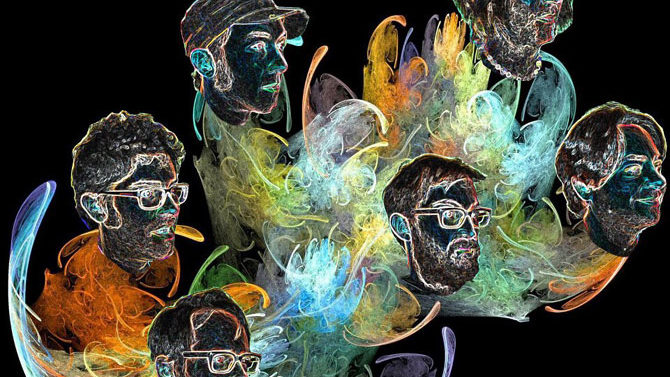 Groovy Times: Progenitor of Athens sideburn envy The Late B.P. Helium (of Montreal) will perform two relatively rare shows this month with his Afrobeat/Krautrock group Space Trucks. The first happens Wednesday, Apr. 10 at The World Famous, where the Trucks share the bill with Atlanta’s soft-shoe Tropicália muse Adron. You can catch Space Trucks again Saturday, Apr. 20 at Flicker Theatre & Bar when they hit the stage along with Grape Soda, LeSac and Black Moon.

The Moment, You Want It: The punks in Burns Like Fire will perform as part of the annual 500 Songs for Kids benefit at Smith’s Olde Bar in Atlanta. The group plays Friday, Apr. 19, the first night of the two-night event. The theme is “The 50 Greatest Soundtrack Songs,” which means this is probably your only chance to see Burns Like Fire play Eminem’s “Lose Yourself” from 8 Mile. Songs for Kids raises funds for sick and hospitalized children and promotes healing through several different facets of musical interaction. All the groups on the bill are raising funds on their own, too, and if you’ve got a few bucks to help out, see songsforkidsfoundation.org/burnslikefire.

Brother, Can You Spare a Dime?: The irrepressibly creative New Sound of Numbers has launched a Kickstarter fundraising campaign to press its new album, Invisible Magnetic, on translucent blue vinyl. The goal is to manufacture 500 copies of the record, and the total dollar amount sought is $2,500. There are still a couple of weeks left, so head toward facebook.com/thenewsoundofnumbers for details. You can hear the title track from Invisible Magnetic at thenewsoundofnumbers.bandcamp.com, and while you’re there, why not go ahead and check out the band’s 2006 debut album, Liberty Seeds.

Keepin’ On: The never-pausing songwriter Caroline Aiken will bring her band back to the Melting Point on Thursday, Apr. 11 to perform songs from her 2010 release, Welcome Home, and selections from an upcoming album. This news, in and of itself, might not turn your head. People play shows all the time. But dig her band! She’ll be joined by legendary Motown keyboardist Ike Stubblefield, Michael C. Steele (Randall Bramblett), Eddie Glikin (Phil & The Blanks), Matt Joiner, Paul Scales and Michelle Castleberry. It starts at 8 p.m., and kids under 12 are free. For more info, see carolineaiken.com.

Well, Finally: After more than three years of work, Incendiaries is finally releasing its debut album. The fully rockin’ crew has titled it Give Me a Reason, and it will celebrate this long-gestated affair with a release show at Little Kings Shuffle Club on Saturday, Apr. 13. The group will be joined by rap heroes Mad Axes and a temporarily reunited Maximum Busy Muscle. Copies of the album will go for five bucks a throw, so take a Lincoln with ya. See facebook.com/Incendiaries.

Hot Night in Dixie: Athens own self-described Jewish cowboy, Adam Klein, will release his new album with his band The Wild Fires on Friday, Apr. 12 at the Georgia Theatre. The full-band album, titled Sky Blue DeVille, is a new step for Klein, and this lineup (featuring bassist Steve Abercrombie, guitarist Crash Cason and drummer Bronson Tew) already has a fair amount of touring under its belt. The album is to be released on both vinyl and CD, but you can stream it all over at adamklein.bandcamp.com. As usual, Klein employed a host of special guests for the recording, including the aforementioned Ike Stubblefield as well as Randall Bramblett and David Blackmon. When the group began its session at Full Moon Studio, it had only planned on a 7-inch single, but as things progressed, it fleshed out into a full-length. Reportedly, Klein has another couple of albums worth of material already written, too. Check out adam-klein.com and cowboyangelmusic.com for all your additional needs.

This Ballot Weighs a Ton: Voting in the 2013 Athens Hip-Hop Awards is underway at chocolatecitylive.com. This inaugural event is presented by UGA (a.k.a. United Group of Artists) Live, and the awards ceremony happens Sunday, Apr. 28 at the Georgia Center’s Mahler Hall (1197 S. Lumpkin St.). The awards show will feature a performance by Low Down and Duddy, whom I’ve not seen in easily 14 years, and special invited guests include Montu Miller, Tip Clarke, Cassie Chantel, Isaiah Stephens, BadGirlzClub GA, Keo, Swank, Black Nerd, Tony B and more. It’ll be hosted by M$ Raw, Major Bigg, Kim Teasley, Breezy Goings and Buddah. Tickets for the event are $10 in advance for regular admission, but VIP and other categories are, of course, more. Tickets are available at the above link.

Wait No More: The lineup for the 2013 AthFest Compilation CD has been revealed. Alongside tracks from reliable locals Patterson Hood, Don Chambers and Lera Lynn, you’ll hear tunes from some notable up-and-comers, like Brothers, k i d s, Easter Island and Shonna Tucker & Eye Candy. Others on the CD, which comes out June 18 and features artwork by David Hale, include The Darnell Boys, MrJordanMrTonks, King of Prussia, High Strung String Band, The Hobohemians, The Warm Fuzzies, The Welfare Liners, Dangfly! and Like Totally!. That’s right: two bands whose names end with exclamation points. Fun! [Gabe Vodicka]

Bits and Bobs: The folky folks in Candid Coal People have recorded a new EP titled Weymanda, which may or may not be a Widespread Panic reference. Feel free to ask them via facebook.com/candidcoalpeople, and listen to their older tunes at reverbnation.com/candidcoalpeople… Jeff Rieter (The Heap, Diet Rockstar) reports that his old band Baghouse is back in action after 12 years. The band, which also includes Andy Robinson and Jeff McLeod, is playing together again “as a way for McLeod to further explore the Moog guitar in a group setting.” Now, isn’t that nice? All joking aside, the Baghouse of old was a noisy rollercoaster with stops in jazzland and ambientville (dig soundcloud.com/baghouse and facebook.com/baghousemusic). Supposedly, the new sounds are even more aggressive. Well, put ’em up, Baghouse.