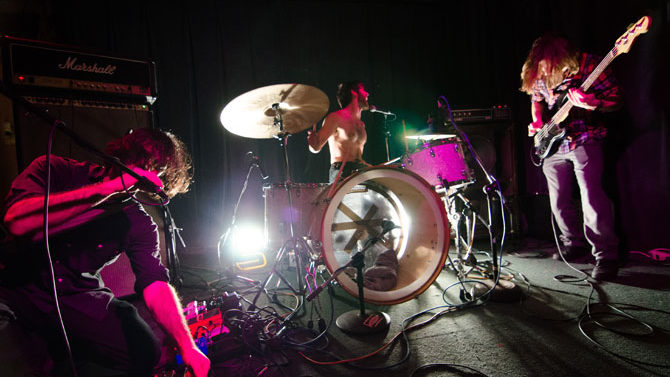 Tomorrow Never Knows: Although the boys in the band are residing in New York at the moment, I’m pretty set on delivering any news about Bambara. The trio’s new album, DREAMVIOLENCE, is slated to come out Apr. 30 on the band’s Emerald Weapon imprint, which functions as a catch-all home to its members’ various media projects. I received a pre-release copy of the album a few weeks ago and was shocked by how the band, which could have easily traded on its deft knowledge of pop hooks and rock sensibility, chose instead to dive off the deep end into experimental murkiness and past-the-reef darkness. This is the soundtrack to the aftermath of an avalanche. Or a ship sunk long ago. The 13 tracks were recorded in the band’s New York basement, but carry all the desolation of a rural Wisconsin snowdrift. Yes. It’s that good. Keep up with all things Bambara via Facebook, and sneak a listen to the album’s opening track on Bandcamp.

Ring-A-Ding-Ding: Multi-genre vocalist Marty Winkler will perform with her group Martha (also featuring Bryan Shaw and Dr. Arvin Scott) at the Melting Point on Thursday, Feb. 21. Although easily and possibly reflexively categorized as a jazz singer—a skill in its own right, to be sure—Winkler’s repertoire of material speaks to a broad swath of 20th century pop. (In this context, “pop” means tunes having an artistic debt to Broadway, big band, swing, etc.) The show is being billed as “An Evening of Jazzacana-Jazz/Americana/Pop,” which illustrates why we should eschew titling at all if we can’t avoid making it sound like a casserole no one wants to eat. Martha is joined this night by jazz vocalist Laura Coyle, who has performed at the Atlanta Jazz Festival and the High Museum of Art. Listen to Winkler here, and check out Coyle, too.

Right Back at Ya: Athens Slingshot, the brand new festival conceived by longtime Athens musician Kai Riedl, is about to become a reality. The three-tiered event (music, art, technology) happens Saturday, Mar. 9. Participating live music venues are 40 Watt Club, Georgia Theatre, New Earth Music Hall, Little Kings Shuffle Club, Flicker Theatre & Bar, Farm 255 and Go Bar. Passes for it all are a mere five bucks and will be available for purchase at each venue the day of Slingshot. Ongoing updates are being posted on the Slingshot site and on Facebook. Hats off to Riedl for taking the chance on this and having the gusto to see it through. I know fully well how much work this type of thing is, and I applaud him.

Noise Annoys: There’s a spoken word and music event happening at Flicker Theater & Bar on Thursday, Feb. 21. Titled “Experimental Music and Spoken Word,” the event kicks off with competitive readings hosted by Write Club Athens—the subjects are “Boy vs. Girl,” “Head vs. Heart” and “Love vs. Marriage.” The music comes courtesy of Royal Futility (featuring Mux Blank and Natalie Stewart), Pride the Lycan, Skeleton-Neck and Sharktopus. Both Sharktopus and Royal Futility are making their live debuts this night, so, you know, get in on the ground floor. The music spans from minimal psychedelic to noise, skronk, metal and improv. And word is that more bands are to be announced, so your dance card will stay full. For more information, see writeclubathens.com.

Stop Right There: Long-running Athens band Pilgrim will release its newest album at the end of this month and celebrate with a release show at the 40 Watt on Thursday, Feb. 28. The self-titled record features a cast of dozens in addition to the band’s core of Paul McHugh and TJ Machado. Matt Hudgins played drums; other guest players include Jacob Morris, Jef Whatley, Melissa Colbert, Madeline Adams, Brad Morgan and Alex Kroh. The band is doing a full-court press with this release, releasing it on LP, CD, digital download and Bandcamp. Musically, Pilgrim doesn’t break any new ground but flies the freak flag of Foghat, Thin Lizzy and all those other shirtless bands that soundtracked hundreds of knife fights in the ’70s. It was recorded at Chase Park Transduction with Drew Vandenberg and mastered by Joel Hatstat. Check out some tunes over on Soundcloud.

Bleep Bloop: You know, I’m all for people doing what they want to do and taking their talent in any direction they’d like. But I’m also a really big fan of people sticking to what they do best. So, it’s with tenuous enthusiasm that I wanna tell y’all about the crazy side project of blues dude Chris Ezelle called DJ EZE, where he dips his toe into electronic music and beat production. As an unabashed fan of dance music and electronic experimentation in general, I applaud that Ezelle is trying his hand at this stuff, but overall, his album, Part Robot—If I Was a DJ, is really hit and miss. A couple of tracks (“Robot and the Damaged Trust,” “Robot Sockhop”) are pretty cool, though, and worth the time. It’s something that could’ve been an OK single, but an album just seems too much at this early juncture. Check it out for yourself.