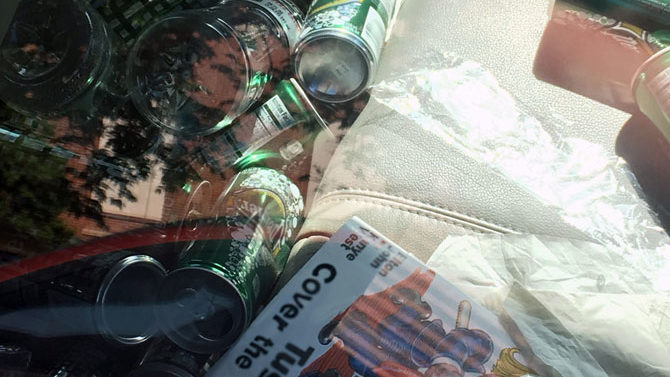 (Independent Release) Here’s a case of misguided aesthetics: With a cover strewn with trash and a title nabbed from Sherwin-Williams, Tug’s debut EP seems like some slacker joke. Yet Cover the Earth is a feral beast. Through five searing tracks, Tug claws at the boundaries of metal and hardcore with complex, razor-honed noise.

While common riffs and tropes crop up, the band rejects easy imitation and combusts often into ferocious improvisation (“Falling Through Webs”). Yet it doesn’t always lead to bloodshed; the fluttering intro to “The City” swells with gradual entropy, a measured burning arc so glorious that even the eventual crash is a work of art. It’s the sort of non-conforming, freeform cartwheeling that fans of underground bands like Rodan and Trumans Water will recognize and relish, especially on the staggering nova-burst of a closer, “I Live Here Now.”

Given this very literate form of chaos, one sees the empty cans on the cover in a different light. Is this a microcosm of the universe at large? A physical manifestation of the EP’s aberrant sounds? Perhaps we’ll never know, but one thing is clear: Tug is no joke.