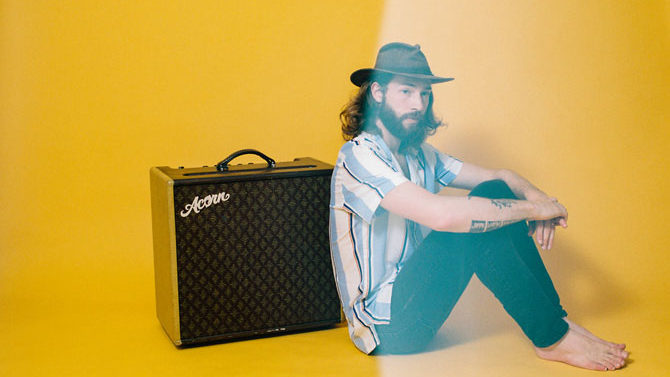 Now based in Atlanta, Sam Burchfield grew up in the foothills of the Blue Ridge Mountains in South Carolina and spent his college years in Athens. He was headed up the East Coast to Boston when Flagpole caught up with him this month.

Burchfield’s relationship with travel stretches across his first full-length record, Graveyard Flower. It’s only one song longer than his previous release, the EP Unarmored, but Graveyard Flower distinguishes itself with a cohesive folk sound and recurring lyrics that tie it together. Permeating the album is a restlessness for movement and a desire to reconnect with the natural world. “Sometimes you’re so caught up in a routine that you forget to just look up and see what’s around you,” Burchfield says.

A yearning to break free from the constructed world around us appears at the very start of the record on “Waking Up.” The song pulls from Burchfield’s trip to the Arches National Park in Utah with his wife, fellow musician and collaborator Pip the Pansy, who adds levity to the song with her flute’s trill. Seeing all the stars in the desert was the titular “waking up” moment for Burchfield and encouraged him to be more present in life.

Nature’s omnipresence is essential to Graveyard Flower, but as it moves forward, listeners step out onto shaky ground; they’re forced to recognize how nature’s mutability reflects their own impermanence.

“As I started to dig into it, the theme started to open up into this idea of: We’re tied to nature because we come from nature, and we return to nature,” Burchfield says.

Yet it’s easy to lose sight of that connection to the Earth, not just because of technology, but a constant urgency to be somewhere else. Burchfield’s career, in particular, lends itself to long-distance trips, but for him travel’s purpose isn’t to have the greatest mileage or fastest arrival time. Even moving within a small area can inform your perspective through what you choose to absorb and ignore. For Burchfield, traveling by car or going hiking changes the way he views the spaces he passes through and his perception of time.

A similar experience accompanies a play-through of Graveyard Flower. Only listening to the singles leaps you over swaths of thoughts, and you end up missing pieces—in this case, the lyrical repetitions that loop the record back into itself. One of the most central reoccurrences is the phrase “graveyard flower” which first appears in “Hold My Hand” and crops up again in the final track, as well as in the album’s name and art.

On the album cover, the theme of mortality that drifts through the record is condensed into the single image of a skeleton as an emblem of death. Two artists played a role in the figure’s creation. Atlanta tattoo artist Dustin Cramer designed the artwork for early singles off the album, as well as a skeleton that ultimately ended up as art for an early A-side CD release and on Burchfield’s arm as a tattoo. Artist Michael Kai expanded on that preliminary design to create the final block print-like image of the skeleton imbued with movement and a flower for a heart.

Looking at the exquisitely matched artwork may suggest otherwise, but when it comes to his own creative process, Burchfield isn’t waiting for perfection. From his time as a student in the UGA Music Business Program, the words of David Barbe, the program’s director and a pillar in the Athens music scene, still stick in Burchfield’s head. “He lit a fire under us,” he says of Barbe. “And one of the things he said…[was] never give yourself a fallback plan, or you will fall back on it.”

That advice pushed Burchfield away from the mindset of needing perfection from the outset, and into one of rising to the occasion. For Graveyard Flower, Burchfield leaned into that by recording the album at home, instead of at a studio, for the first time.

“There’s something freeing about that, and I think you let go of that sense of perfection,” Burchfield says. “You’re just moving forward.”

Sam Burchfield’s performance at Hendershot’s on Thursday, Mar. 19 has been canceled. Visit samburchfield.com for updates and to listen to his music.