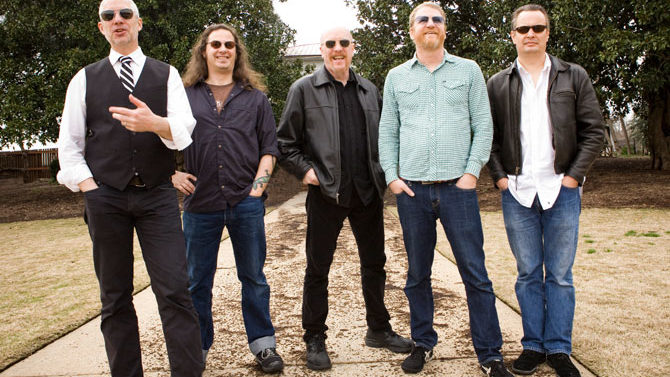 If you’ve ever hitched a ride inside a ’78 VW Scirocco as it creeps up and down the California 101 with cassette copies of S.F. Sorrow and Hairway to Steven in the glove box, then you already have a sense of what Camper Van Beethoven feels like. But inside the band’s multiverse, there are also serious indie leanings, ska vibes and Tejano and klezmer approximations. As a functioning unit, they’ve been around almost as long as the Jerry-led version of the Dead and, as a result, are a venerable American psych institution of the first order.

The annual Cracker/Camper Van Beethoven Camp-In at the 40 Watt Club is a shot to see CVB’s records—nine full-lengths, a batch of EPs and a few essential rarities collections—take on a broader perspective. Live, the band is in certain ways more subtle, surreal and rousing. As an appetizer, we asked bassist Victor Krummenacher to weigh in on the group’s discography from front to back.

Victor Krummenacher: I just remember it being very fast and very cheap. Jonathan [Segel] made the decision to record up in Davis, [California]. We recorded in a garage, and I think we stayed at Jonathan’s mother’s house. I think we spent $1,000 over two weekends—one weekend of recording and one weekend of mixing. And it was basically just what we were playing at the time. I was like, “It doesn’t sound like a big rock record!” But that was because I didn’t know what I was doing at all. I was 19.

I saw R.E.M. at the Santa Cruz Civic Center, and I gave one each to Peter [Buck] and Michael [Stipe]. And they called a little while later and said, “Hey man, we like this music, and we’d like you to open for us.” We thought, of course, that it was a prank [laughs], because Camper was just a joke band. We all had serious other bands. It was Jonathan’s main thing, but not mine. But chemistry is just a weird thing. Who knew?

VK: David [Lowery] is a hard-working guy, and we were rehearsing a lot. So, there was a lot of writing going on, and we went very quickly into II & III. Rough Trade were kind of skeptical. So, we borrowed money from Pete Carney, who was the original cowboy on acid referenced in “Eye of Fatima.” We bought our first tour van, and I think the budget on that was $2,000–$3,000.

VK: That’s actually one of my favorites. I feel like that’s when we were at our most psychedelic. There was a lot of cool studio-only work. There was a lot of tape manipulation, which added an unexpected emotion to it. It had the snark, but that’s where the songwriting, for me, began to take shape. Things like “Good Guys and Bad Guys” just have a classic song structure. It could have been a Ray Davies song. There’s a certain period when you’re young and just sitting in a room, bashing things out and seizing on ideas, and that’s when things really began to coalesce for us.

1988: Our Beloved Revolutionary Sweetheart (The Hit)

VK: We actually had money. No one knew what that meant, but we had it. We also had to start working with a producer, [Dennis Herring], which was very, very different. It was a much more controlled situation. It was also where David began to assert himself as a band leader and a songwriter, which I think we needed. We were like a band of roving gypsies, and we needed some discipline, and David had it. And that caused some rancor, but it also provided some really solid direction, because we had some very solid material.

VK: It’s my favorite record of ours. It’s some of David’s most beautiful writing. I think it’s really well played, because that’s where the years of all that road work are finally paying off. “Pictures of Matchstick Men” was a forced fit. We were playing it live a lot before that. It was actually recorded for Beloved, but we just didn’t put it on for time reasons. At that point, we were growing in popularity, and this was during the era when people were still developing bands, and [the label] said, “You’ve got to have a single.” But either way, I think that record will stand up for a long time.

VK: We had just finished off some studio stuff for Camper Van Beethoven Is Dead. It was really just a testing of the waters. I’m really not a Lindsey Buckingham fan, and I really don’t like Tusk as an album. I kind of haphazardly did “Sarah” when my reference points were weird Jah Wobble albums of the ’80s. I handed it to Jonathan without the Pro Tools session file, and he said, “I can put it back together.” Turns out he assembled it wrong, and I thought, ”That’s not how I did it.” But it came out great. It was free-form insanity.

VK: It was kind of chaotic in how it came together. There were some differing ideologies, as per usual. To me, the great thing was the idea behind it. They really worked on it. It’s not entirely thought out, so it has that kind of Tommy ambiguity, but I think it’s really strong. For me, it’s the sleeper genius record.

VK: We had a gig cancel on us in Big Sur, and we were all in the Bay Area at the time. And I would just go over after work, and we’d sit around and write. There are some songs on there that I adore because of how we were sitting around together again and writing. But there was a lot of music that came out of that that also wound up on Camino, and sometimes I wonder if we shouldn’t have just condensed the two records into one California thing and given each idea one side. It was kind of White Album-y, in some ways.

VK: There are these short punk rock songs like “Sugartown” and “Classy Dames and Gents” that remind me of The Jam and Buzzcocks. I really like that material a lot, and I want to play it live at some point. That’s where I learned how to play, through records like that. This is where we’re from. Musically, we were formed in the late ’70s and early ’80s.