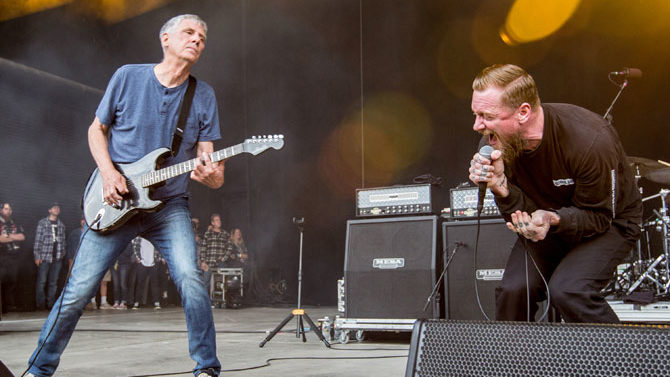 Mike Vallely was just 14 years old the first time he saw Black Flag play live. It was October 1984, at City Gardens in Trenton, NJ. The group was in the midst of a particularly creative year that yielded three bedrock West Coast hardcore punk albums—Slip It In, My War, Family Man—and a blistering live tape, Live ’84.

“Henry Rollins was fronting the band then, and seeing them play that show was a life-affirming moment for me,” Vallely says. “It changed my life, but more so, I say it was life-affirming, because it made me feel like, ‘OK, I can continue on my own path. I can do what I want to do in this life… Rollins, as the frontman of the band, really embodied that spirit.”

For Vallely, being in the audience that night was a big bang of sorts. It was a moment that empowered him to embark on a career as one of the boldest and most stylishly innovative professional skateboarders to rise out of the ’80s.

Since 2014, Vallely has found himself on stages around the country alongside Black Flag’s founding member and principal songwriter, Greg Ginn, singing the songs that awakened his own fiercely independent spirit for a whole new audience. Taking on the role as Black Flag’s fifth vocalist—following Keith Morris, Ron Reyes, Dez Cadena and Rollins—feels like a gig for which Vallely was tailor-made. But it’s a position he never expected, or even wanted, until Ginn approached him. Now, along with Ginn, drummer Isaias Gil and bass player Joe Norval, he’s bringing Black Flag’s songs to life once again, channeling the group’s visceral power into a modern context.

But the music possesses timeless qualities that transcend interpersonal squabbles. Channeling these qualities is what drives Vallely to inhabit these songs. “Really, there isn’t a song in the group’s entire catalog—and I am deep into the catalog—that doesn’t have an energy or a relevance in this moment,” Vallely says. “Being the vessel through which these songs are communicated is very meaningful to me.”

Vallely formed his first band, Mike V and the Rats, in 2001. Two years later, he joined Ginn as a guest vocalist for a Black Flag reunion in Los Angeles, the group’s first official activity since breaking up in 1986. In 2013, Ginn and Vallely reconvened under the name Good For You to release a pair of LPs. For Ginn, the project marked a return to rock after transitioning into electronic music. It also laid the foundation for Black Flag’s return. He assembled a new lineup with Reyes singing, and released the 2014 album What The…. The lineup was short-lived, however, and after firing Reyes in the midst of an Australian tour, Ginn reached out to Vallely.

“When Greg asked me to sing for Black Flag, we already had Good For You, and that could have easily been Black Flag instead,” Vallely says. “I wasn’t really open to pursuing that kind of conversation—I would rather have done something new. So, by the time he asked me, it felt more like my friend asking, as opposed to, ‘Black Flag is calling.’ That’s the depth of it, and it’s important to understand that dynamic.”

It’s a role that Vallely does not take lightly. Black Flag’s legendary eight- and 12-hour practices, he says, are in full effect, and key to cultivating a band of consequence. The songs are worked so deeply into everyone in the group’s DNA that the band can play freely—not a recreation of what’s heard on the albums, but a living, breathing take on the music that leaves a lasting impression on anyone who witnesses it.

“We’re in this together,” Vallely says of the group’s live shows. “This isn’t about a monologue from the stage. This is about a dialogue with everyone in the room. Something beautiful and special can happen in those moments.”