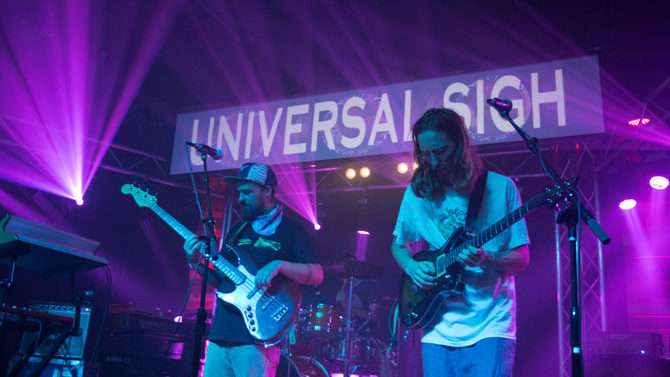 In July 2015, local band Universal Sigh could be caught every Tuesday night at Georgia Theatre entrancing audiences with its self-proclaimed genre of “metamorphic rock.” The residency, dubbed Sigh in July, featured one touring band on the bill with Universal Sigh each week. The shows provided a light-bulb moment for the quartet as it sought to combine the world of jam bands, psychedelic rock, funk and folk in Athens.

A year later, the Sigh in July festival was born, and it has continued to grow each year since. Rather than four separate nights over the course of the month, the group hosts a two-day event featuring local and national music acts and an artist market. This year, Sigh in July runs July 26–27 at Live Wire Athens, with a stacked lineup that includes Funk You, EarthCry, Voodoo Visionary, The Orange Constant, Three Star Revival and more.

“The residency [at Georgia Theatre] was us trying to figure out how to make playing in a college town over the summer special,” says Pace Maynard, Universal Sigh’s guitarist and backup vocalist. “We were really nervous to do a two-day event in 2016, but it seems like we’ve filled a niche that we didn’t even realize was there.”

As opposed to the sprawl of AthFest or other annual events, Maynard says Sigh in July offers a more intimate experience in that Live Wire’s capacity maxes out around 300 people.

“We’re just trying to showcase a side of the music scene in Athens and Atlanta that is underrepresented in many established festivals,” Maynard says. “And the green room at Live Wire is very small, so attendees are more likely to run into a lot of the artists—you don’t get that at a lot of events.”

Until recently, funding for Sigh in July came solely from Live Wire and the Robertson family, who co-own the venue. This year, sponsors include SweetWater and Jack Daniels, and a portion of proceeds will benefit AthFest Educates.

The event also features an artist market with several local vendors. The market focuses mainly on tie dye, herbal products and products in the holistic healing field. “This is the first year that people I did not personally know have reached out and expressed an interest in being part of the festival,” says Julie Hutchins, Sigh in July’s artist coordinator and a local yoga instructor.

Given that a new cycle begins in Athens every July and August, when a fresh wave of UGA students flood the city, Hutchins says Sigh in July is a time for newcomers to find their place during a time of transition. “Sigh in July is a special time where you can network and make new friends and set intentions and dream as big as you want to dream,” she says.

And Maynard says, after living in Athens for more than 10 years, the music scene is as strong as he’s seen, citing groups like Cicada Rhythm, The Orange Constant, Partials and Misnomer, who he says maintain a high musical standard. He believes Athens is still a great place for up-and-coming bands.

“As long as there is affordable housing here, there will be a thriving arts community,” Maynard says. “If you’re trying to play [music] professionally, Athens is a great incubator, because your rent is cheap, and you can try out all your new material on a hometown audience.”

In addition to planning the festival, Universal Sigh—rounded out by guitarist and keyboardist Steve Terry, bassist and vocalist Austin Parker and drummer Jones Maynard—is in the midst of recording a sophomore full-length album. While Maynard says the record will hold tight to the weirdness of 2016’s Atoms & Void, it will also see the group diving head-first into more poppy sensibilities.

“The biggest difference is that Tomas Uribe is producing this one and has given us the confidence we needed to shift our focus from writing and performing to recording,” Maynard says. “We actually recorded more material than we can fit on an album, so there will likely be some additional singles or an EP coming out in the future—but we haven’t planned that bit out yet.”