Falling in Love With the Grateful Dead 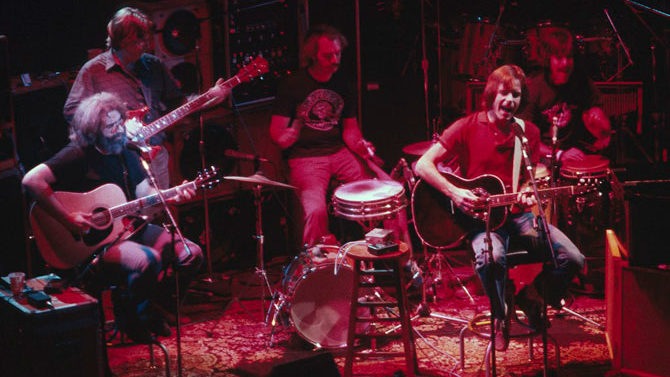 Editor’s note: In the summer series Classic City Deadheads, Athenians are celebrating their love of the Grateful Dead and reflecting on some of their favorite Dead (or Dead-inspired) recordings. This week’s heads are Phelan LaVelle and Greg O’Connell, newlywed musicians who discover deep grooves together with local post-punk band Shade.

My relationship to the Dead holds a unique space in the mythology of my own musicality. When I was younger, I did not like the Dead at all. I tried to get into them—I wanted to know what all the hype was about, several people I deeply respected were serious heads, etc. Also, I really appreciated all the skulls and roses, but I just couldn’t see it, couldn’t hear it. I thought their music was antithetical to how I identified as a music appreciator and a musician. Me, I was punk AF.

Now, years later, with the Dead at the very top of my hierarchy of most beloved bands of all time, I understand how I didn’t see or hear them. I couldn’t then, because I didn’t really know how to—it wasn’t time.

Almost every time I have fallen in love in my life, I can break it down to a series of events and conditional “facts” basically resembling something my parents told me about an ancient cave in Ireland. Something like, there’s only one moment every however many years that all factors conspire to illuminate this one particular precious stone in the cave. The tilt of the Earth, the solar cycle, wind patterns, etc. all have to be just right for this rock to light up, and it’s different every time. This rock has been there the whole time, but everything has to be just right for you to realize its majesty.

This is what I spoke of in my wedding vows to Greg—how he lit my rock. And this is what I am saying when I talk about the Dead—it is from a place of truest love, from a cave of glowing rocks. At some point in my life, everything conspired in a certain way, and I was able to hear and see the Grateful Dead. And now, it’s not an option to not.

Greg and I just got married, and we had two Grateful Dead bands at our wedding. Both were truly mind-blowing. It was really meaningful for us to express the way that our personal relationship relates to the band. When Greg and I really listen to the Grateful Dead together, it is wild. It is as if our own personal love for this band amplifies each other’s love so that we love them more by loving them together. And then this mutual love for the Dead amplifies our personal love for each other, which, in being together, amplifies itself, which in turn amplifies love for the music, and so on.

A feedback loop of love. Now, isn’t that some heady shit?

Fave live recordings: anything from ’77

My favorite Grateful Dead performance is their 1969 appearance on “Playboy After Dark.” Garbed in a collared poncho, an innocent-looking Jerry Garcia is standing around a minibar with Hugh Hefner, some cocktail-drinking suits and fancy ladies. Hugh asks Jerry why they have two drummers, and Jerry quite amicably explains in his own way: “Mutual annihilation.” He likens the two drummers to the snake that eats its own tail, and says that if you stand between them, they will make figure eights in your head. He then strolls through a crowd of more suits and more fancy ladies, climbs the stage, and the band plays a beautiful rendition of “Mountains of the Moon,” followed by a rockin’ “St. Stephen.”

This is why I love the Dead. Outsiders were interested, but didn’t quite understand; maybe they chalked it up to drugs. Insiders were looking for the secret behind the band’s riddles, latched on to their image and made idols of them. Then there was the Dead, floating in the middle, making killer music, figure eights going off in their heads. [Greg O’Connell]