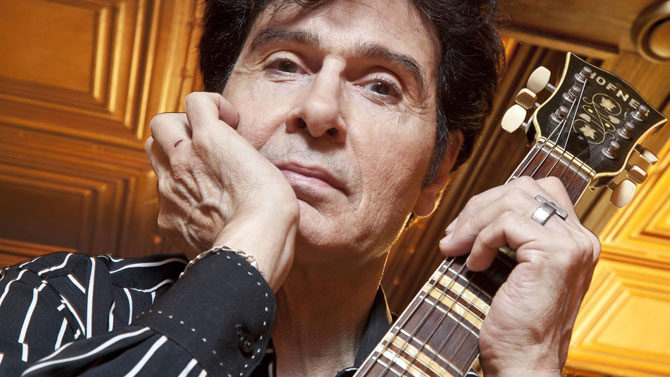 To the best of his recollection, it was sometime in the early 1980s when Tav Falco last tried to play a show in Athens. His band Panther Burns was a young, Memphis, TN-based rockabilly outfit, born in a cotton loft on the Mississippi River in 1979. In the beginning, Falco boasted little musical skill or experience, aside from chainsawing a guitar into pieces during an act of performance art. Yet he paired up with guitarist Alex Chilton of Big Star to create an “art-damaged” balance of their respective abilities.

Over the ensuing four decades, the Arkansas-born auteur’s career has flourished. On songs such as “Brazil” from 1981’s Behind the Magnolia Curtain LP, or his cover of “Strange Fruit” on 2018’s Cabaret of Daggers, Falco has mastered a singularly primitive motif. Blues rhythms carry his less-than-pitch-perfect singing, creating an off-center momentum in which songs feel as though they could fall apart at any moment. But he always keeps them together, creating a marvelous tension—at least when the group is allowed to play.

That fateful trip to Athens began when Falco and Chilton, along with original drummer Ross Johnson and bass player Rene Coman, piled into a ’64 Thunderbird and set out for a three-night run of shows in Nashville, Athens and Atlanta. The group hadn’t made it an hour outside of Memphis when Johnson “got scared” and turned the car around. When the rest of the band made it to Nashville, they recruited a “drunken hillbilly” named Alvin to play drums.

“We made it through that show,” Falco says. “It was real chaos, but I had a bit of a crowd there, and they were ready for anything. The next day, we still didn’t have a drummer. So, we went to the trailer where Alvin lived, got his drunk ass out of bed, threw him in the Thunderbird and hit the road.”

Only about 100 miles later, though, the car had a blowout. Falco changed the tire, but after a few more miles, another blowout left them crippled on the side of the road. “It became somewhat demoralizing,” he says.

Falco flagged down a passing car to take him to the next town, get a tire mounted on the rim and bring him back to the car. Finally, “we arrived at the 40 Watt at showtime,” he says, “but this hippie that ran the joint came outside with his long hair, beard and sandals, and says, ‘Y’all are canceled!’ I said, ‘We’re here—we’ll just set up and play! And he says, ‘I know you’re good, but you’re too late. You ain’t playing here.’ I wanted to sock him right in the nose, but I didn’t.”

The group played the Cotton Club in Atlanta the next night. Falco recalls that Alvin was so drunk, they could barely play. Meanwhile, Chilton had become so unhinged that he spent the show hiding behind an amp.

Falco went on to spend time in New York at the height of the no-wave era, palling around with Andy Warhol and even landing a part in Edo Bertoglio’s Jean-Michel Basquiat biopic, Downtown 81. He also plays an outlaw biker in Bruce McDonald’s 1991 film Highway 61.

These days, Falco is a consummate professional, living in Vienna and fronting a band of mostly Italian musicians, including guitarist Mario Monterosso, bass player Giuseppe Sangirardi and drummer Walter Brunetti. He has written and directed his own Urania film trilogy, about a woman who becomes embroiled in a plan to recover Nazi plunder from the bottom of a lake. He studies dance—Argentine tango, Viennese waltz and more. But above all else, Falco is a musician whose most recent recordings are imbued with punk anxiety aimed at modern imperialism.

Cabaret of Daggers is a haunting collection of covers and two original numbers, “Red Vienna” and “New World Order Blues,” bound by themes of protest and Orwellian consequence. The record finds the group placing modern anxiety in a timeless context. The lilting waltz of “Red Vienna” reveals a cautionary tale about collapsing empires and a history of insurgencies.

“We have a very sick and a very sad country,” Falco says. “We must learn from the past in order to know what we’re doing now, and to come to terms with our future as best we can.”

Looking back on 40 years of victories, compromises, shows canceled and shows played keeps Falco and Panther Burns on the road, moving forward with their own revolutionary message. “We call this show the ‘40th Anniversary Howl,’ because that’s what panthers do,” Falco says. “It’s time for this music to howl.”