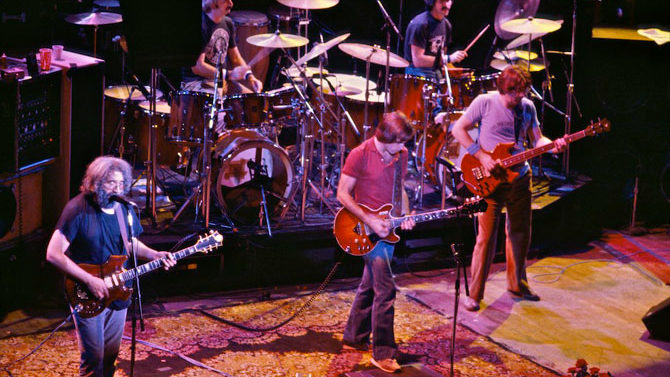 I got hip to the Grateful Dead in a similar manner, I imagine, to more than a few teen longhairs in the hazy-dazy 1970s: by coming across a used record at my friendly neighborhood shop. (In my case, it was 2015, I was closing in on 30, and my once-flowing mane had long since begun to fade away.) I’m not sure what brought me to purchase that timeworn copy of Europe ’72, other than the suspicion that my wife, Talley, would get a kick out of it—she had run in jam-band circles for a magical spell in college, and the music was forever a part of her young-adult DNA.

For me, like many I knew, the Dead conjured up unsavory associations. I’d dug briefly into American Beauty during a folkie phase, and appreciated its influence on a lot of my favorite music. But my prevailing mental collage was one of hippie-cosplaying trust-funders, goofy dancing bears, dorm-room blacklight posters, “Touch of Grey.” The Dead was a relic, a punchline, a lifestyle brand for frat parties and head shops.

Yet with late-onset adulthood comes a humbling awareness of one’s cultural blind spots, plus a dwindling trust in the currency of cool—as other Dead converts can attest, the early 30s are a common age of acceptance—and so, album in hand, I resolved to give the group another shot. To my surprise, Europe ’72 was not the indulgent wankfest I’d feared. Instead, it was intricate, purposeful, abstract. Free, but grounded. Trippy, but twangy. Genre-defying, but not gimmicky.

I slid quickly down the ol’ rabbit hole. I devoured the studio albums, then the sanctioned live stuff, and on to the nostalgia-ridden recesses of the Internet Archive and, inevitably, fan sites that overused olfactory words like “tasty” and “pungent.” I felt flushed from the wild, early blues workouts and disco-slick late ’70s; swam in the cool, magnetic current of ’72–’74; and found crazy diamonds in the ’80s rough. (Stockholm syndrome or no, I even learned to love “Touch of Grey.”) Every weekend at home saw the return of Grateful Dead Sunday. In a sweet, simple twist of fate, the Dead soundtracked our son’s first year.

Suddenly, I was connected to generations of Deadheads. I traded notes with certain uncles, for whose taste in music I developed a penitent respect. I gushed to cooler friends—not to mention my much-cooler wife—who had been on board for years. I was embarrassed by obvious connections that had been hiding in plain sight. (Yo, the Meat Puppets were heads?) As a pop obsessive from a young age, experiencing that feeling of pure discovery again was invigorating.

Then, in a cosmic coincidence—or another example of the cyclical past comin’ around again—the Dead re-entered the zeitgeist with cometlike spark. Critical darlings The National organized a sprawling tribute album. There were documentaries made, books written and podcasts launched. Emboldened by the testimony of godheads like Lee Ranaldo, a new generation of indie rockers began singing the group’s praises. (Perhaps to counteract that effect, smooth guitar guy John Mayer literally began singing the group’s music.) There is, currently, a very hip New Jersey band called Garcia Peoples.

And here, in our self-conscious college-rock mecca, friends and colleagues sidle up to me at shows and ask, furtively, “Are you into the Grateful Dead?”

So, it’s in that spirit that I invite my fellow Athenians to join me in proudly proclaiming their affinity for that most misunderstood of rock and roll bands. In this summer series, local folks will detail their journeys to Dead fandom before reflecting on some personal favorite entries in the band’s vast catalog.

I’ll ease us in by rounding up a few of the basics, canonized recordings that got me started on my path toward proper Deadhead-dom. Many of these shows have been officially released as part of the Dick’s Picks or Download Series collections; the others can be found on archive.org. Feel free to weigh in with your own faves in the online comments.

It’s crazed, it’s compact, there’s a whole lotta Pigpen—it’s everything you could want from freshly dosed, late-’60s Dead. Blues jammer “Caution (Do Not Stop on Tracks)” plays the role of set centerpiece, clocking in at a disorienting 21 minutes. Future set staple “China Cat Sunflower” had just been introduced, and it’s fascinating to compare the fiery, nascent version heard here with the easy-grooving dance number of later years.

Featuring the Dead in its psychedelic prime, after the group had begun to shed its primal beginnings but before it forged its brand of cosmic Americana, these Fillmore shows are all vibe and texture. Besides boasting a mind-expanding, 30-minute “Dark Star,” the show’s closing set also features a 30-minute “That’s It for the Other One” and subsequent, half-hour “Turn on Your Lovelight.” Yes, it’s essentially a massive, hour-and-a-half jam, and yes, it slaps.

1972 saw that legendary springtime Euro tour, among countless other highlights. But its cheery, celestial energy is best encapsulated by this benefit concert for the Springfield Creamery, author and Merry Prankster Ken Kesey’s family farm. In sweltering heat, the band laid down flawless versions of its best-known songs, including a monumental “Playing in the Band.” Listen for Kesey, who was on emcee duties (and probably on other things, too).

This show marked the introduction of the Dead’s massive Wall of Sound, a complex, innovative but flawed PA setup that delivered high-quality output and served as its own monitoring system, but presented a slew of technical obstacles for the band and its crew. It’s a fun listen, full of mirth and possibility. It also features the debut performances of two songs that would become mainstays, the Garcia/Hunter groover “Scarlet Begonias” and Weir/Barlow standout “Cassidy.”

Spring ’77 is considered one of the Dead’s live peaks, with May 8’s Cornell University gig frequently cited as the band’s greatest performance. It’s an impeccable show, all fire and finesse, a blend of experimentation and accessibility. But the following night edges out Ithaca in terms of variety. It’s highlighted by lovely detours, like the plaintive ballad “Peggy-O,” and unexpected callbacks, like “The Other One,” to the group’s slowly fading psychedelic past.