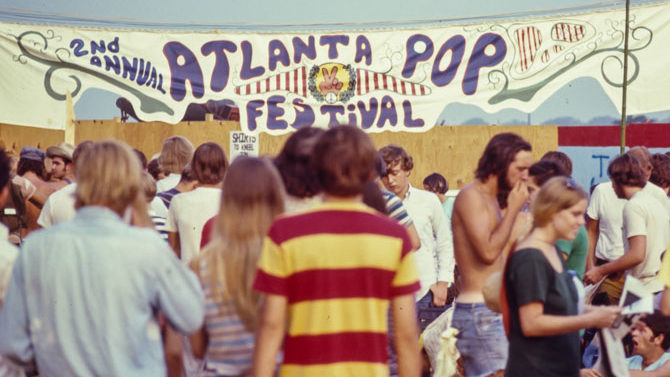 On Jan. 26, a gathering of gray-hairs and old hippies attended an introductory showing at the UGA Special Collections Libraries of Alex Cooley Presents: Time Has Come Today, a documentary on the historic Atlanta International Pop Festivals produced by Athens resident David Lee, as well as accompanying footage by Steve Rash.

The late concert promoter Alex Cooley organized the first Atlanta International Pop Festival in July 1969, a month before Woodstock, and bits of that concert are seen in the film. However, the documentaries’ main focus is the second festival, held over the Fourth of July weekend in 1970, in burning 100-degree heat.

The two concerts featured many artists who did not play Woodstock, like The Allman Brothers Band, Grand Funk Railroad, Rare Earth, B.B. King, It’s a Beautiful Day, Poco, Procol Harum, Spirit, Mott the Hoople and The Chambers Brothers, as well as ones who did, like Johnny Winter, Mountain, Richie Havens, John Sebastian, Ten Years After and Jimi Hendrix.

The second event, near Byron, proved to be one of the last U.S. festival appearances by Hendrix and Duane Allman before they died, which is part of its historical value. Hendrix—who is not shown in the new film for copyright reasons—played another warped version of “The Star-Spangled Banner.”

Oddly enough, I attended that concert as a young 18-year-old from Minnesota—probably the only Minnesotan in attendance—and stayed under canopies in the woods with people from New York. So, it was quite strange and emotional to be sitting in Georgia once again for this initial public showing.

Time Has Come Today falls short of classic festival films like Monterey Pop and Woodstock, largely because of the raw source material. Lee’s doc suffers from poor sound and jerky filming. It has more crowd shots, camping and highway footage and less preparatory camera work. Obligatory topless and nude bathing sequences abound, as festival-goers avoided the heat by dipping into a nearby river and lake.

Yet, given the rawness of the material, the documentary is the product of a labor of love in terms of collecting and reviving this bit of history. The two Atlanta International Pop Festivals took place during a time when the counterculture was making its presence felt in the South, even in the face of reactionaries like Gov. Lester Maddox. While the outnumbered police at the festival were hands-off in the face of nudity and weed, Maddox worked to make sure no such festival happened again. (Of note, the crowd in 1970 was overwhelmingly white—as you might expect—and young.)

Estimates of how many people attended both festivals have ranged from 100,000–700,000, with the most common number around 300,000. An attendee offered $500 to anyone who could give him definitive proof as to the numbers involved. (While paid attendance figures would help, admission to the festival ultimately became free, given the huge numbers of people who showed up.)

The person speculated that the number of attendees at the 1970 festival was between 100,000–200,000, based on single-day aerial crowd shots. That would not take into account people who came for only one day or those surrounding the festival site, so the ambiguity remains.

Though valuable, Time Has Come Today isn’t the only available recorded documentation of the Atlanta International Pop Festival. A double-LP of select performances was made available years ago, and CD and DVD recordings featuring sets by the Allmans and Hendrix are readily available.

The Middle Georgia Raceway in Byron, near where the festival was held in a soybean field, has been closed for years, but a memorial is there to remind those of us who were there of those magical three-plus days that became known as the “Southern Woodstock.”

Update: This article has been edited to correct several factual errors.