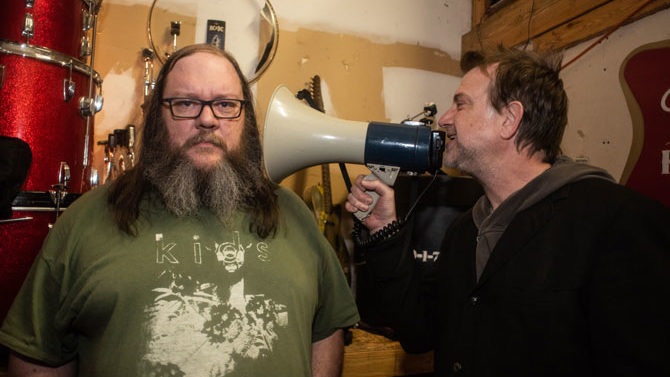 Editor’s note: This week, local Americana mainstay Don Chambers drops his first proper live album, Live at the Georgia Theatre. The record also marks a first for taper and archivist Sloan Simpson—long a fixture at Athens music venues—who tracked, mixed and mastered the project for release. Chambers, who opens for the Drive-By Truckers on Valentine’s Day, spoke with Simpson about his process.

Sloan Simpson estimates he has recorded around 5,000 shows in Athens. If the average set is 40 minutes, that’s 200,000 minutes. Spread across two decades, that’s 10,000 minutes per year, 833 minutes per month, 27 minutes per day—and that’s just the recording, not editing or uploading. Simpson calls this monumental collection a “hobby”; I’d call it holy vocation. His website, southernshelter.com, features a panoply of local and out-of-town bands. His dedication and the sheer volume of what he’s accomplished made me want to know more about his obsession.

Don Chambers: What was the impetus to start recording?

Sloan Simpson: In the early ’90s, I traded cassettes of Grateful Dead and other jam bands through the mail. Around 1999, a friend gave me a broken DAT recorder and said if I wanted to get it repaired, I could have it. Another friend sold me a couple mics to get me started.

DC: What was the first show?

SS: It was a festival, September of ’99 in Atlanta. The first band on the bill was Squat—that of course ties in with the Athens thing.

DC: Do you have a compulsion as an archivist?

SS: No. For me, the compulsion is filling up my personal music collection with everything I want. It’s motivated by knowing I want to listen to that again. When I first started recording, I knew a bunch of guys who were all taping the same bands. I would go see Widespread Panic, but there was no reason to record, because 50 other guys were recording the same show. As my taste started shifting over the years, I would ask local bands, and no one had ever approached them about recording, so I started focusing on those shows.

DC: Were you aware of Alan Lomax or Art Rosenbaum and that whole side of archiving folk music?

SS: Just sort of peripherally. When I got into recording via the jam bands, other tapers had their own reason for recording. They weren’t seeking out unrecorded talent like Lomax or Rosenbaum were. In fact, there were a lot of people who bought gear specifically for one artist, and when the band broke up, they sold all their gear.

DC: I know you said you do this because you want to listen to it again, but you’ve accidentally become an archivist for a scene. How long have you been in Athens?

SS: I moved to Athens in 2009, but I started recording here regularly in 2002. I was driving from Atlanta, sometimes two or three times a week. That was a crazy six or seven years. I would leave Atlanta at 9 p.m., drive up here, leave in the middle of the night and work the next day. Luckily, about the time my body started shifting, and I couldn’t just store up sleep anymore, my job changed, and I moved up here.

DC: That’s a long time to be doing this. Have you kept count of the number of shows?

DC: Has there been anyone who has helped you with the technical side of it?

SS: A lot of tapers don’t do any post-production, and I do and always have, because raw room tapes can sound boomy and distant. I have fired many questions at Joel Hatstat. Joel has been my guru. Also, Gene Woolfolk and Derek Almstead.

DC: So, you’ve approached recording as a production, as opposed to some kind of purist way.

SS: It’s a totally different category than attending a concert. Unless you listen to the recording at the place it was recorded, at concert volume, with people to soak up the sound, you are not going to reproduce the concert. It’s a different medium, so do what you can do for that medium to make it sound good.

DC: So, would you prefer to listen to a live version of a song or the studio version?

DC: Yeah, I probably err on the side of not wanting to repeat myself. The way it’s recorded is the last time it will happen that way. Changes in band members, changes in myself, changes in the weather change the songs. The best songs live and breathe with you and mutate. Recording technology gave us the idea that we capture music. That’s an illusion. We first tried to capture music by writing it down—musical notation. But that doesn’t capture it.

SS: Right—it’s more of a guide. Before any of this taping came up, you would buy the live record, even if the songs just had micro variations. Otherwise, just add audience screams to the original recording… I wanted to ask you. You’ve put out 10 records, and that is certainly a lot of material. You could say you’re overdue for a live album. Is there some reason you are doing one now?

DC: I was happy with the sound of the band, and I was happy with it when we played it. After the show, it felt like something special had happened. That made me want to listen to what you recorded.

SS: Yours is my first commercial multitrack release. I’ve been teaching myself to mix multitrack, which helps with live recordings, and that helps with mastering. It all trains the ear.

DC: Sounds like you are coming around to the other side of the recording process.

SS: Yeah, I am switching from quantity to quality.