With Roadrunners, Eureka California Won’t Back Down 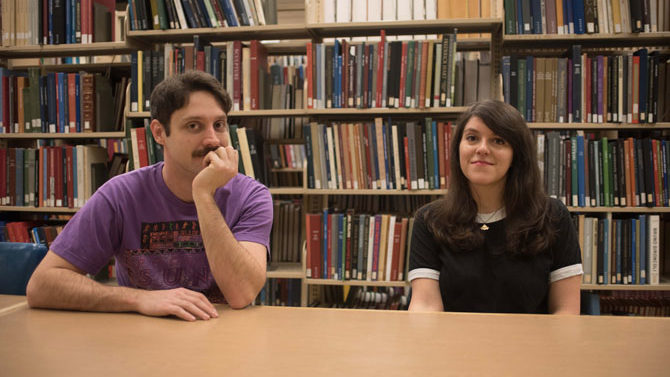 For Eureka California, less is more. The band formed in 2007 in Raleigh, NC as the solo venture of singer and guitarist Jake Ward, then expanded to a five-piece the next year following Ward’s move to Athens. A three-year stint as a trio followed. But the group hit its stride in 2012, when it began operating as a two-piece featuring Ward and drummer Marie Uhler. As a duo, it has released three albums of snark-laden, socially charged garage-rock, music indebted to caustic British punk and domestic proto-indie but bearing a uniquely Athenian energy.

Eureka California’s latest, Roadrunners—recorded in the UK with psych icon Matthew “MJ” Johnson behind the boards and out May 4 via HHBTM—is its most trenchant and unguarded LP to date. It’s “a tale of trying to survive in Trump-era America,” according to a press release—but it’s also, like much of the group’s music, about survival, period.

“[W]e don’t really have the luxury of taking time to write record-by-record, to think, ‘Hmm, what should this one be about?’” says Ward. “Our band pays its own expenses, which is really nice, but we still have to work to pay rent, bills and everything else. We’re really just working all the time, and things come together in pieces.”

Ward and Uhler have long evinced the sort of blue-collar, DIY-or-die spirit that many musicians rep but few truly abide by. Since 2011, the pair has played around 300 shows, according to an archive on its website, often embarking on multiple tours per year, including several stints overseas. This level of activity has helped the band streamline its already efficient sound and also fostered a certain level of skepticism, particularly concerning the industry and its treatment of marginalized performers.

“The only lyrics to [Roadrunners track] ‘SWDs’ are, ‘Why should I ever care again/ About a band made up of four or five straight white men?’” says Ward. “I don’t know if we have the answer to that, but as society changes, it’s something we think about a lot: the dissolution of rock and roll as simply a boys’ club, and championing the voices of those that aren’t readily pushed to the top.”

In other ways, Roadrunners is more nakedly personal. For Uhler, the process of putting together the album occurred during a trying time in her life.

“I was being steamrolled daily by a job that was killing me, and drowning in debilitating chronic pain that, it turns out, was just perpetuated by that job,” she says. “We had this short window of studio availability, and my brain was so fried all the time that it was hard for me to write parts to songs, and we couldn’t tour as much because I physically couldn’t be in a car for that long or even set up my drum kit, so I was worried we wouldn’t be able to finish enough songs in time.”

That urgency and frustration bleeds through on the record, with songs like the blazing, Uhler-penned “JJT”—at one minute and 15 seconds, it’s a terse tune even by the band’s frenetic standards—openly reflecting the drummer’s struggle. “All of my adult life is working to nearly die/ To barely get by under the poverty line,” Ward yelps, before the song itself dies abruptly.

Elsewhere, Roadrunners radiates blissed-out DGAF vibes. On “Over It,” shit is hitting the fan because, apparently, Mercury is in retrograde—“but you can only use that excuse once, I’m afraid,” Ward cautions. “If you really wanted to know,” he sings on the chorus to “Mexican Coke,” the album’s closing track, “I could tell you where to need to go.”

If ever such sass could be said to represent a leap in maturity, it’s in Eureka California’s case. Where once the band cloaked itself in irony, frankness now abounds. “Roadrunners is really a record of honesty,” explains Ward. “There’s no posturing. The songs are true to what we think and believe. In that respect, Roadrunners might be the best representation of who we are as a band.”

And though Ward has primarily been the group’s focal point thus far, Eureka California feels increasingly like the product of two distinct yet highly synchronized creative forces. “Very, very slowly, I think I’ve figured out ways to express certain things in our music,” says Uhler, “and sometimes we kind of distill parts of what Jake writes and what I want to say into something that represents both of us.”