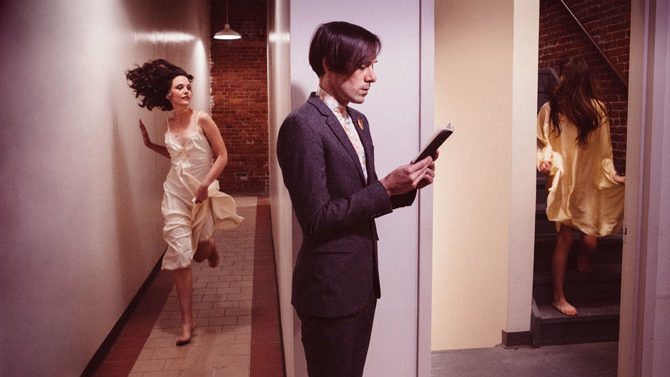 This month, shapeshifting Athens pop act of Montreal celebrates the release of its latest album, White Is Relic/Irrealis Mood, a six-track, 42-minute affair that’s dense and demanding while also serving as the group’s most creatively satisfying set in years—lo-fi cultural anxiety writ large with Arthur Russell-at-Paisley Park vibes. Founder and frontman Kevin Barnes says the record, which blends the personal and the political until there is hardly any distinction, arose after he “reached a healthy point of self-forgiveness for my failed marriage and became deeply educated in the lies of America the great.”

Listening to White Is Relic/Irrealis Mood—primarily a Barnes solo joint—it’s clear there is a deep well of inspiration behind the album, from its bass-heavy production to its blistering lyricism. Looking ahead to of Montreal’s release show at the 40 Watt, Flagpole invited Barnes to send over some thoughts on a few of the influences that shaped the new LP, and he happily obliged.

“I realize that I’m way late to the party on this one,” says Barnes, who recently dove headfirst into the sprawling catalog of the late Texas DJ, known for pioneering the “chopped and screwed” method of hip-hop production. “In a way, I feel like DJ Screw is the godfather of genres like vaporwave and dubstep. His method of slowing everything down breathes new life into a track and unlocks all sorts of new frequencies and sound waves that were aurally unintelligible at the track’s original speed. I learned through listening to his work that almost everything sounds cooler when slowed way down. Even the most basic mainstream pop song becomes deeply transportive and mysterious when time-stretched below its original BPM.”

In fact, Barnes eagerly employed this trick on the new of Montreal record. “I used this approach on a bunch of songs,” he reveals. “I recorded them a lot faster than I intended them to be, and then I slowed the recordings down until they started to sound magical and exciting, and then I would overdub on top of that to complete the composition. It was a very interesting way to shake myself out of my ordinary arrangement routine, and it pushed me into new sonic territories.”

“I went through a deep happiness phase watching all of [his] amazing films,” Barnes says of the Spanish director, whose acclaimed and often controversial movies include Volver and The Skin I Live In. “I found the playfulness, complexity and taboo-breaking aspects of his films so inspiring and intellectually/emotionally/spiritually salubrious. From his early punk/shock films all the way to the present day, his films never disappoint or bore. His career arc plays out almost like a zen koan, if people wrote dirty koans instead of limericks.”

Barnes primarily envisioned White Is Relic/Irrealis Mood as a missive against “toxic” American whiteness. “I absorbed the works of James Baldwin, Angela Davis, Elaine Brown, Ava DuVernay [and] Ta-Nehisi Coates, as well as Malcolm X’s autobiography, to gain insight into an aspect of the American experience that was unknown to me,” he says. “I was subconsciously aware that systemic racism formed a large part of the foundation and inception of this country, but I wasn’t cognizant of just how deeply it continues to define and affect us in such destructive and deeply negative ways.”

In the process of creating the record, Barnes says he became hyper-aware of his own role in this system. “Often, when the topic of systemic racism comes up, white people get extremely uncomfortable and try to change the subject, because they don’t want to take any responsibility for their role as beneficiaries of oppression and injustice,” he says. “I’ve come to understand that my perceptions and world view have been seen solely through the filter of [the] white, male experience. Becoming self-aware and acknowledging the privilege I am given as a white male in this country has helped me step outside of myself and appreciate how unfairly the scales of justice and economics are tilted in my favor.”

Of Montreal’s remarkable new album makes no bones about its creator’s newly radical POV. “I feel that conducting a nationwide spiritual cleanse, involving financial reparations and reality checks, is needed right now and is essential for the creation of a more equal and healthy society,” says Barnes. “Until the evils of our past are confronted and exorcised, there will continue to be psychological imbalance and sickness in our communities, on both the micro and macro levels.”