Is/Ought Gap Is a Throwback to Athens’ Golden Era 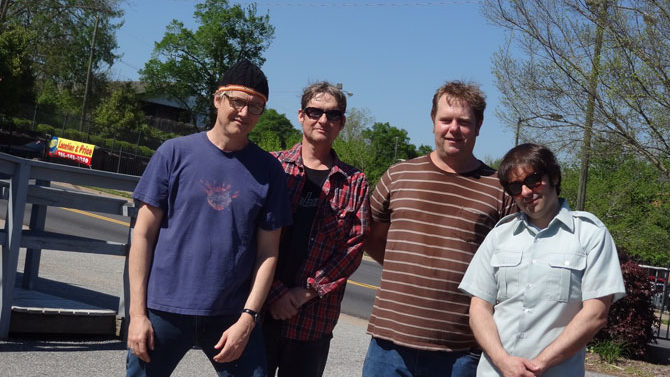 Is/Ought Gap is among the most irreverent and truly odd bands to emerge from the early ’80s Athens scene. It’s also one of the least known bands of the era. Press play on 2014’s Lucky 7, the only proper release to bear the group’s name, and singer Bryan Cook’s booming drawl demands the full attention of anyone within earshot. When Cook shouts “Artsy peace and love,” it’s as though he’s poking fun at Athens’ college-rock golden era while laying bold claim to his group’s place in the annals of music history.

And rightfully so. As a young townie, Cook appeared in director Tony Gayton’s 1987 documentary Athens, GA: Inside/Out, fronting the band Time Toy. Is/Ought Gap was Cook’s previous band—his first—that formed amidst a scene defined by now-legendary acts such Pylon, the B-52s and R.E.M. Is/Ought Gap was there, too, from 1981–1985, and Lucky 7’s opening salvo is a time capsule cementing his awkward, compelling presence amid the surge of Athens’ creative boom.

“‘Artsy’ is sort of a story about a party I went to at Limbo District’s [Jeremy Ayers and Davey Stevenson’s] house when Is/Ought Gap was just getting started,” Cook says. “It was a very trendy party, to my mind. Folks were speaking French or Spanish and smoking hash-laced cigarettes. [I was] laughing but not knowing what was funny, feeling both totally welcomed and way out of place and [in] over my head…

“[The song] was sort of an attempt to describe the art and music scene from my upside down/inside out perspective,” he adds. “I put it first on the CD because it kinda summed up my feelings at that time in Athens: a party, confusion, mixed signals, inclusion, exclusion at the same time… And it is kinda danceable.”

Over the years, Is/Ought Gap appeared on a couple of cassette compilations. There was also a four-band 12-inch EP titled Some, which included the Bar-B-Q Killers, Eat America and Mercyland. The group’s members have reconvened to play occasional shows—most recently, at Art Rocks Athens’ 2014 exhibition of art and music circa 1975–1985. The band had such a good time that Cook, along with drummer Allen Wagner, guitarist Tom Cheek and new-addition bassist and guitarist Jason NeSmith—original guitarist and bass player Haynes Collins resides in the UK and couldn’t make the overseas trek—are doing it again May 20.

“Tom lives in New Orleans, and we’re always talking about playing more,” Cook says. “The only way it would happen is if I just booked a date and worked backward from there.”

The seven songs on Lucky 7 were recorded in 1984, when the group paid for time in Atlanta’s Songbird Studios. It was a state-of-the-art 24-track recording facility that seemed excessive, but that’s how it was done at the time. Despite its efforts, there was no way the group could fill all 24 tracks, even when it invited a friend to add saxophone to songs like “Her Peace” and “Mad.” Cook even added occasional piano flourishes. “We had 12 tracks for drums,” Cook laughs.

Lucky 7 evokes the art-pop of Pylon and the B-52s, while maintaining a jagged form of rock unlike any of Is/Ought Gap’s lauded peers. Asked if he views the music as punk, Cook replies, “I think so. It wasn’t new wave.”

Vic Varney, of art-punk duo the Method Actors, handled the recording sessions, and the seven songs were cut to tape. But before anything could be done with the material, the group broke up. Cook moved on to play with Time Toy, while the rest of the band reconvened as Kilkenny Cats. “We never did anything with the songs, but Tom and I always wanted to.” Cook says.

Finally, in 2014, band members pooled funds and gave the recordings to producer John Keane. His mastering brought the sound up to date, but 30 years later, songs such as “He Said” and “Wake Up Wet” shed light on a long-forgotten band that shares unmistakable musical DNA—autumnal guitar textures, percolating rhythms—with the definitive music of a celebrated era.