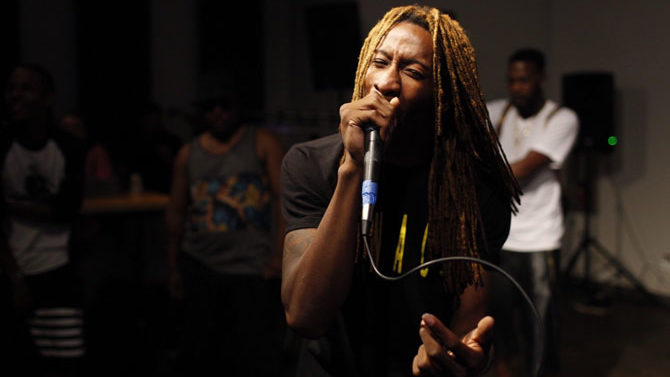 It feels like a homecoming or family reunion when Damien Ellison is back in Bethel Midtown Village. As we post up in the parking lot to talk, nearly every car stops to greet the young rapper known as Yung’N Restless, who grew up in the low-income neighborhood just north of downtown. Familiar calls and cries sound out from porches and breezeways, from windows and across the grounds. The tape of our conversation is punctuated with the exchanges, which ring on replay with the reverb of human voices shouted among the brick and concrete.

“I come from this shit,” says Ellison, who now resides a few miles away. “I did my first song ever out here in 2005. I recorded it in an apartment up under the one I was staying in.”

“Product of my environment/ Salute to Bethel,” Ellison rhymes on a BET-cypher-style video that helped solidify his place as one of Athens’ most promising up-and-coming rappers. His video for “OKAY” was filmed in Bethel. Bethel imbues his music, but Ellison’s relationship with the long-troubled neighborhood is complicated. Bethel is both home and hindrance, and its increasingly famous native son is a man divided. “I love it, but this shit poison,” he says, looking around. “I come from this shit, but my mind’s somewhere else.”

Ellison is a man with multiple homes: musically, intellectually, philosophically and physically. He’s a certified Southern rapper who spurns much of the South’s late chart-topping produce—the now-hegemonic style of Atlanta’s Future and Young Thug, for example. He’s a young man known for his “old soul.” He’s not the guy you expect to gush about how Lauryn Hill is his favorite artist.

Ellison has a laser-like focus on personal success in music, but not for himself. “I don’t even want it for me,” he says. “Some people are like, ‘I gotta get rich, I gotta get rich,’ and I’m thinking, ‘Man, I gotta get my people straight.’ It ain’t even for me.”

It makes sense, then, that the paradoxical artist released two contradictory mixtapes on the same day in early October: Goldie, an album by turns soulful and cerebral, and Ignant, an aggressive, freestyle collection of trap bangers. The two releases were followed almost immediately by another unlikely hybrid: a lyrical, Southern take on one of the biggest songs out of the New York rap scene at the moment, Brooklyn rapper Young M.A’s “OOOUUU.” Not only are Southern rappers not typically lyrical, but they tend to eschew classically New York-style beats like Young M.A’s for the dominant Atlanta sound. But Yung’N Restless wants to keep you guessing.

The one dimension of Ellison that’s without contradiction is his work ethic. Not content with releasing two album-length efforts on the same day, he dropped an accompanying video for Ignant’s “10-4.” The video leapt to 10,000 views in less than two weeks, and combined with the viral success of his “OOOUUU” video, brought Yung’N Restless a new level of success and reach, hinting at something bigger. Famed Atlanta DJ Greg Street reportedly has his eyes on the Athens artist, and the two are rumored to have some of the best work Ellison has produced ready for potential release. Ellison even saw his music in rotation at Street’s hip hop/R&B radio giant V-103 last year.

Indeed, Ellison is poised to make a name for himself. But like some Athens musicians on the rock side of things, he’s unhappy with the current pop trends in rap and aims to make it on his own terms. He shares a certain kinship with local bands who maintain a particularly Southern—and certainly Athenian—allegiance to guitars and acoustic drums during a moment of bleep-bloop electronica in rock.

While other locals might look to Elephant 6, Yung’N Restless returns to Atlanta’s Dungeon Family collective for inspiration. It doesn’t get much more classically Southern than Ellison’s first memories of music: listening to his mother’s Goodie Mob tapes in the back of an old-school Oldsmobile Delta.

It is those formational experiences that inspired Ellison’s desire to make music with “substance.” He does not hide his disdain for what he calls “mumble rap,” the trendy style popularized by Future, Young Thug, Desiigner and others who do, it must be said, mumble incoherently much of the time. Ellison, a Southern classicist, looks to the articulate lyricism of Goodie Mob, OutKast and others of that ilk. The contemporary rap scene is “just a whole bunch of characters,” he complains. “If you can get your character to sell, that’s all it is. It ain’t even about the music.”

But that trend is passing, he predicts. “I feel like this shit is coming back,” Ellison says about what he finds to be richer music of substance. “People are starting to pay attention to people talking about shit again. They’re waking up.”

Much rap music is indeed returning to a politically minded, “conscious” age, and Yung’N Restless’ latest offering is a track that belongs rightfully alongside Killer Mike or Kendrick Lamar. Released just three days before the election, “Spiritual Negroe” features Ellison’s best and fiercest rapping yet. On the raging track, Ellison offers political rap on par with T.I.’s recent Us or Else record. Blame and anger are directed both inwardly and outwardly. Ellison admonishes some in his community but is sure to point out the effects of racist repression over the past half-century.

“They X’ed out Malcolm/ Ended the reign of King Martin/ Huey P in the grave on some backward shit/ We really still on some slave and some master shit,” he raps. Taking aim at American mass incarceration, he continues, “Niggas in prison wonderin’ why they in the cell they in/ ’Cause ain’t none fuckin’ with melanin.”

That latest track is yet another change from an artist who’s committed to innovation. “I honestly feel the music is a gateway,” Ellison says. “I know I got a calling, a calling with words. I don’t know what exactly it is. I feel the music is something to get me alright, and after that I’m gonna have to go for the big shit.”