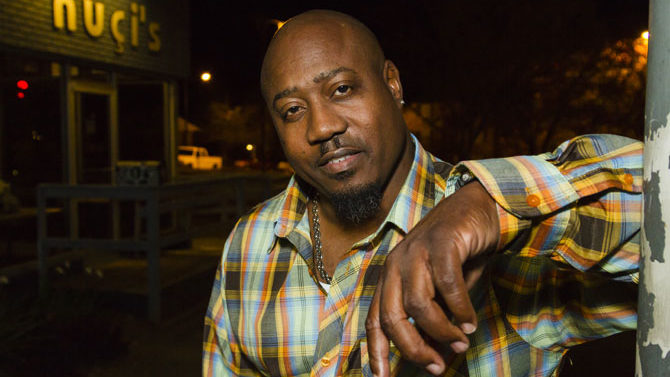 The artist known as Elite tha Showstoppa remains fiercely independent. But the man born Darrin Ellison was tempted by early opportunities in the music business. After a stint in the Navy in the ‘90s, Ellison came home to Georgia and started a socially charged hip hop outfit called Runaway Slave. The group, which quickly began gathering buzz in influential circles, was courted by A&R suits who urged Ellison to ditch the politics and adopt the nihilistic gangsta-rap style popular at the time. One label rep, he says, even urged him to incite a brawl at one of his performances to give off the appearance of being hard.

Ellison, who stresses that he’s “not about the Illuminati, or any of that crazy stuff,” says it soon became clear the world of mainstream hip hop was not for him.

“In the music business, it’s not about if you’re the best rapper,” he says. “It’s solely about the money. [Originality] doesn’t matter… I do believe there are people that are in control who want to stay in control. And once they learn what influences people, they maximize the power of that entity.

“I’ve desired what comes with the fame,” he continues. “I wanted to put my mom in a good house. I wanted my dad to stop working those 16-hour days. And I had a lot of opportunities from different labels that were like, ‘You’ve got crazy showmanship, and your flow is good, but if you rap about this we can get into the money.’”

Instead, Ellison returned to his hometown of Athens. Alongside a diverse group of likeminded MCs, including Ishues, BadKat and Low Down and Duddy, Ellison helped establish the Classic City as a mini-hotbed of conscious hip hop in the early 2000s. In addition to performing in downtown clubs, those artists frequently appeared at house parties and DIY punk shows, breaking borders and expanding minds in the process.

More than a decade later, many among the current generation of local rappers and producers cite Ellison as both a mentor and motivator. Ellison marvels at his status as one of Athens hip hop’s elder statesmen. “They call me ‘Uncle Elite,’ he says, laughing. “I guess that stands for something.”

Eugene Willis, who performs as Blacknerdninja, says Ellison is the rare “producer [who] gets the music,” adding that he has dubbed Ellison “the Charlie Murphy of Athens hip hop” due to his stockpile of highly entertaining music-industry true tales. Curtison Jones, frontman for The Swank, says he has always been impressed by Ellison’s commitment to the scene, calling him “the embodiment of Athens hip hop.”

“He’s one of those guys [who] comes out to every show that he can, because he genuinely enjoys and appreciates the music,” says Jones. “He’ll spend hours recording and mixing other artists’ music, and then turn around and record his own.”

It’s through his home studio where Ellison, who suffered a heart attack in 2009 and subsequently cut back dramatically on performing live, has made perhaps his biggest impact on Athens music—not necessarily because of any specific production choices, but rather how closely and carefully he works with aspiring MCs in the booth, dispensing bits of hard-won wisdom along the way.

“There’s a few what I call ‘trill spitters,’” he says of the new crop of lyricists, both in Athens and elsewhere. “They’re staying true to themselves.” Others, he says, lose focus on who they are. “The vocabulary went from ‘power to the people’ and ‘each one teach one’ to sex and drugs,” he says. “It’s always been there, but the focus has shifted… Don’t get me wrong, art is art. But a lot of times people get that dream mixed up with their reality.”

Still, he says of the younger generation, “I don’t try to shut them down for whatever it is they’re doing. I just try to help them have a more well-rounded view.”

His sense of conviction stems from childhood, says Ellison. “My dad instilled a lot in me. He told me, ‘The way you carry yourself [influences] how those who follow you will carry themselves.’ You don’t wanna be a leader that’s faking it. You don’t wanna fake the funk.”

Athenians can pay tribute to Elite tha Showstoppa on Friday, Dec. 11—which happens to be Ellison’s 46th birthday—at the 40 Watt Club, where an A-list lineup of local rappers will perform as part of a Fort Knox showcase, followed by Blacknerdninja and eclectic rock groups The Swank and The Norm. An open-mic freestyle cypher will kick things off, and Ellison’s electrifying current project, the funk-rock-hip hop hybrid group Showtime, will close out the night. In addition to the music, there will be a comedy roast of Ellison featuring friends and colleagues. Proceeds from the evening will benefit Nuçi’s Space.

For Ellison, now a dedicated nine-to-fiver in a serious relationship who has stepped back from the music-biz grind, the show will be a chance to give thanks to those who have supported him over the years, as well as an opportunity to showcase the older, wiser, decidedly mellowed-out version of Elite tha Showstoppa.

“I don’t wake up mad everyday,” he says. “Some days, I wake up and want to go outside and see the butterflies. You know, ‘The air smells crisp. This glass of orange juice is delicious. I should rap about it.’”