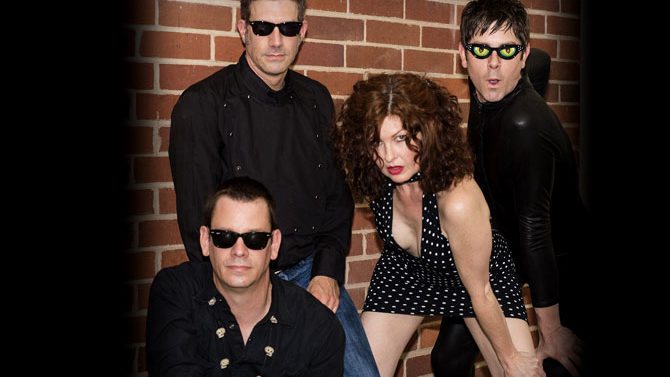 Halloween is Athens’ most widely—and wildly—celebrated local holiday. Along with the ever-expanding Wild Rumpus parade, there’s a live music explosion on Oct. 31, as local bands and big-name touring acts alike put on crazy costumes and get plowed while plowing through the hits—their own or, more often, others’. Though the cover-band population looks to quadruple this weekend, there are plenty of additional options for dancin’ and drinkin’ the night away.

OK, so it’s happening on All Hallow’s Eve Eve, but we’d be remiss to not mention Unknown Hinson’s appearance at The Foundry on Friday, Oct. 30 (9 p.m., $20). The O.G. hillbilly vampire swings through town yet again to regale a potentially unsuspecting after-dinner crowd with twangy, fang-y, matter-of-fact numbers like “Alkyhol Withdrawl” and “Your Man is Gay.” There’s absolutely no better option if you’re looking to kick off the weekend with a weird bang.

Ease into things on Saturday by donning your Trump wig and heading downtown for the Wild Rumpus. After the parade, assuming you don’t have tickets to Young the Giant’s sold-out Georgia Theatre show (8 p.m.), scope out the scene at Live Wire, where New Orleans funk fixture George Porter Jr. hosts an evening of music, as well as a costume contest (9 p.m., $15). Or, you could hoof it back to The Foundry, where a Dia de Los Muertos party features music from merengue outfit Bachata Urbana and DJ Harold G (9 p.m., $12).

Make a point to hit up the official Wild Rumpus afterparty at Nowhere Bar, where Rumpus coordinator Timi Conley’s Kite to the Moon project and Showtime will vibe way into the wee hours (10 p.m., $2). On the chance that it’s uncomfortably crowded, seek shelter at the 25-and-up Little Kings Shuffle Club, where local fave DJ Mahogany will spin spooky classics from the outdoor stage (10 p.m., FREE!). If it’s a sweatier, more sinister sort of dance party you’re after, slither over to the 40 Watt Club to catch townie triumvirate Booty Boyz (9:30 p.m., FREE!). There’s a costume contest happening there, too. (No Pizza Rat, plz.)

Back to the tribute bands: Don’t miss the show at Caledonia, featuring three separate acts—dedicated to the music of Iron Maiden, Weezer and Andrew WK—guaranteed to put a ghoulish grin on your face. The Andrew WK band, Girls Own Love, is a high-octane, all-woman group featuring members of Casper and the Cookies, Man or Astro-Man and Eureka California; they recently opened two shows for WK himself, and yes, they dominate (9:30 p.m., $5 for 21 and up, $7 for 18–20). For a creepy culture clash, crawl up the hill to Bar Georgia, where Cramps cover band The De Lux Interiors will be melting faces and, no doubt, brains (10 p.m., FREE!).

But don’t burn yourself out quite yet, ‘cause there’s a very cool show happening over at Flicker Theatre & Bar anchored by an all-star out-of-towner in Swell Maps/Television Personalities mainstay Jowe Head, who will be supported by an all-Athenian backing band (9 p.m.). Of course, no Halloween in Athens is complete without a late-night trip to Go Bar, which this year hosts two cover bands—Richard Gumby as the self-explanatory Yonic South and members of Crunchy, Saline and Harsh Words playing Electric Wizard tunes as Count Drugula—as well as an after-hours dance party with DJ Blowpop (10 p.m.).