Daniel Romano is a Country Crooner for Modern Times 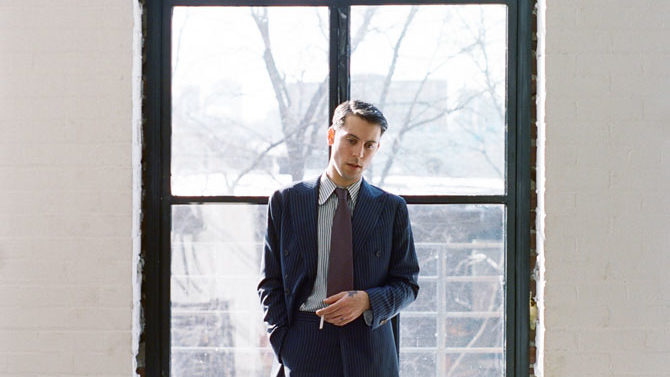 There’s a fascinating contradiction at the heart of country music, in that its best singers use highly structured formulas to express unrestrained emotion. This divide between extreme artifice and forthright sentiment inevitably leads to questions of authenticity and manipulation: Does the clever country crooner really mean it? Is that him weeping, or just the pedal steel? Add to these questions the issue of what it means for a Canadian singer in 2015 to use the songwriting tropes and production style of 1960s Nashville, and you get the captivating conundrum that is Daniel Romano.

Romano’s latest record, If I’ve Only One Time Askin’, seems on first listen a spot-on reproduction of the “countrypolitan sound”—characterized by “country melodies smoothed out by middle-of-the-road pop instrumentation and a crooning vocal style,” as NPR rock critic Ken Tucker put it. Romano’s music begins with a highly stylized revival of an already stylized sound and then adds the next logical component: an almost parodied extreme emotional abjectness. Awash in slap-back reverb, steel guitar and swelling strings, Romano’s songs are more gussied up—and their unlucky lover protagonist gets more roughed up—than the decades-old songs from which they borrow. It all suggests that Romano isn’t going for mere revival.

“The ‘tradition’ that I borrow from is dead,” he says in an email. “The blood has dried completely on the street. I make no attempt whatsoever to keep anything dead from being buried.”

The first hint that there’s something more going on in Romano’s music comes at the end of the new record’s opener, “I’m Gonna Teach You.” On the track, the songwriter speaks on behalf of a woman, promising to teach another man a lesson. If the specific scenario is novel, it’s still familiar territory; lines like “I know the low places you drink in” could pop up in just about any country song. Then, in the final 15 seconds, a curveball: an odd instrumental interlude with a moody, ambiguous atmosphere, as much Serge Gainsbourg as Skeeter Davis.

These interludes hint at the deep weirdness of Romano’s project. They are, he explains, “the open doors to my freedom and spirit. They serve as an abandon of formula and a deeper expression of my selves.” And on a record on which Romano’s country-crooner routine stays consistently at the level of uncanny perfection, these are the few moments when he breaks character.

Of course, pushing a formula to its extremes is itself a kind of commentary. Songs like “All the Way Under the Hill” succeed by old standards, but sustain their convoluted conceits past the point of absurdity. The track offers a notion of apparent success that doesn’t seem all that appealing: The singer claims to have made it, making a play on the expression “over the hill,” but he sounds more like he’s under a headstone.

The conflicting strands on the album—straight, weird; sincere, ironic—all come together on the single “The One That Got Away (Came Back Today).” Another masterfully crafted tale of lost love and echoey twang, the song takes a sharp left turn at the end. This time, the interlude is sustained long enough to make a proper coda. A spectral female chorus coos over a funky bass line. Halfway through, the music drops out and Romano whispers one word: “mosey.” It’s half Superfly, half Lee Hazlewood.

Romano is reluctant to read too much into his music. “The truth of this is that I made [the album] straight and in a very big hurry,” he says. “I’m not one generally to go back and analyze work.” Such claims are belied by the record’s meticulously true-to-type cover art, which replicates the look of classic country records. There’s also Romano’s general aesthetic—for example, a belt buckle advertised on his website bearing the words “King of Mosey.”

But to get lost in questions of originality would be to miss the point. No amount of rhinestones on a Hank Williams Western shirt could distract from the sorrow in a song like “Cold, Cold Heart.”

“These are all unconventional songs,” Romano says. “These are modern songs and ideas dressed in old clothing.”