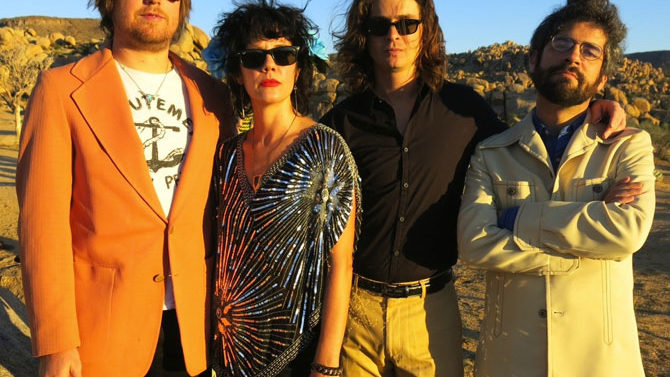 Katie Eastburn is in control. The Nashville-born, Brooklyn-based singer and multi-instrumentalist exhibits the same level of poise in conversation and on Sudden Fear, her first cassette under the KATIEE moniker and the latest entry in a long career that includes work as a solo performer, serial collaborator and member of the Los Angeles trio Young People.

Hearing Eastburn sing for the first time, one might mistake her cool mode of delivery for ironic detachment. Sudden Fear’s sound certainly has a distancing effect: Dark synths and an old drum machine create an unreal atmosphere, with Eastburn’s voice at the center, unhurried and understated, a calm eye in an anachronistic storm. It may sound like she’s holding back out of coyness or disinterest, but the choice is deliberate.

“Maybe it sounds like an artful restraint, but I guess it’s more like an informed restraint,” Eastburn says. “I know my voice. I’m comfortable knowing what I can do and what sounds good.”

“Informed restraint” prevails throughout Sudden Fear. The record features elements of collage and pastiche; Eastburn’s lyrics draw from film, poetry and other music (check the Neil Young reference in opener “Could”), with certain lines popping up more than once (“Watchmen leave their stays,” in “Could” and again in “Sudden Fear”). The album also includes skewed covers of songs by Kris Kristofferson and Leonard Cohen. The instrumentation is a mix of live and electronic, at once warm and one step removed. The overall sense is of a sound that developed organically, steered by a guiding influence—Eastburn—but able to encompass disparate elements.

As for those elements, there are three of them: Jim McHugh, Jeff Tobias and Jason Robira, all one-time Athenians and members of Dark Meat. KATIEE formed in February 2013. Eastburn was scheduled to play a solo show, but as she explains, “I was really bored with playing by myself by that point, really bored of the palette that I had.” In stepped McHugh, Eastburn’s husband. “Jim was like, ‘I’m gonna put together a band for you. It’s gonna be Jeff, it’s gonna be Jason, and it’s gonna be me’.”

The backing band brought built-in chemistry, the trio having played together for years. Still, Eastburn was running the show. “It was a dynamic that really worked, because I really trusted all of them from the beginning,” she says, “but also, because they were my songs, I felt totally cool—and they were totally cool—with saying ‘no’ to things.”

After two-and-a-half years, things have grown more comfortable, Eastburn says. “We’re at the point where I can play them a very spare little demo, like just a little key line and a vocal, and I totally trust them to come up with the orchestration that we all want to hear… [It] took a couple of years, but now we have a vocabulary.”

This ease translates to the music. Robira’s drumming adds punch to the beats from Eastburn’s Dr. Groove. McHugh and Tobias are capable sidemen. Their playing is tamer here than with their free jazz project, Sunwatchers, though they do step out occasionally, like Tobias’ skronky sax solo on “Sudden Fear.” In the center stands Eastburn, her voice exuding cool composure, in control but not controlling.

KATIEE comes to Athens on a short jaunt through the Southeast. The Flicker show will be a reunion of sorts. Eastburn, who opened for her bandmates’ former group on several occasions, drops a tasty hint: “There are rumors that some version of Dark Meat might play.”