For Post-Punk Band Pinecones, It’s All About Friendship 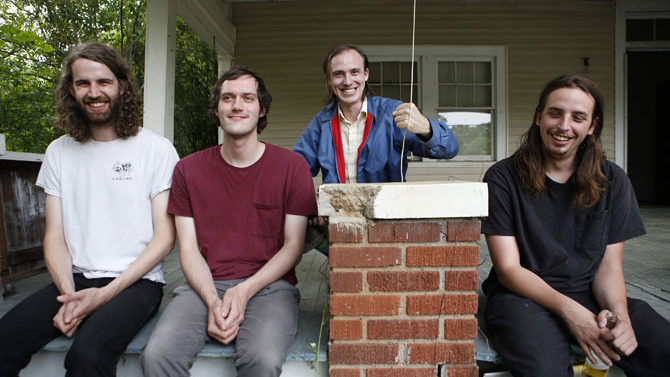 The Ruth Street house where Pinecones officially became a band has been vacant for some time, which is why drummer and former resident Ben Salie has suggested the location for an interview and photo shoot. Shortly after the group arrives, Miller High Life in tow, so does the property manager, understandably curious about the sudden appearance of these slightly disheveled young fellows. Rather than tell them to scram, she invites them inside. Soon, everyone is talking and laughing. Pinecones have made a new friend.

Friendship—specifically, friendship as antidote to the uncertainty of a troubled world—is at the core of the Pinecones experience, from the band members’ daily lives to their music itself. The motif pops up repeatedly throughout their chat with Flagpole and on Sings For You Now, the group’s debut full-length, recorded on April Fool’s Day 2014 and out now on vinyl via Athens label Arrowhawk Records.

For the band’s four members, who have spent time together and separately in Atlanta-based punk and hardcore acts like Crater, Mosaic and Dead in the Dirt, their current group is the result of a carefully cultivated set of personal relationships. Friendship comes first, they explain; music is a happy byproduct.

“Us doing this band together was waiting to happen,” says guitarist Brian “Brain” Atoms, a soft-spoken barista and high-school tutor whose master’s degree in English literature provided the inspiration behind Pinecones’ humble start. (“There was this idea of starting a punk band inspired by the writings of Henry David Thoreau and calling it ‘The Pinecones,’” he recalls.)

“We really don’t know what else to do, or talk about with each other, other than music,” Salie adds. “We’ve played music for such a long time together—this was just another time that we decided to play music with each other.”

After whipping up an initial batch of songs, Pinecones booked a slot on WUOG 90.5 FM’s “Live in the Lobby” series. Athens label Southern Vision released the primal, pummeling live set on tape, with the title Plays Cosmic Hits.

The radio recording spread quickly, establishing the then-mysterious group as one of Athens’ most buzzed-about new bands. Pinecones’ music felt familiar—featuring varying shades of the mid-‘90s Dischord roster, as well as echoes of the gritty Southern rock the band’s members grew up on—yet innovative, an impressionistic take on established post-punk themes.

Buoyed by a wave of community support, Pinecones entered the studio with local engineer Joel Hatstat and recorded what would become Sings For You Now live—including most of the vocals—and in as few takes as possible.

“We really wanted it to sound as completely honest as possible,” says vocalist and guitarist Bo Orr, “and for no one to be surprised in a bad way if they were to come and see us play. That’s what we sound like.”

The 11-song album acts as both mile marker and manifesto, “a blueprint of that moment,” as Orr describes it, and a proper introduction to one of the most exciting young rock bands to emerge from Georgia in the past decade. 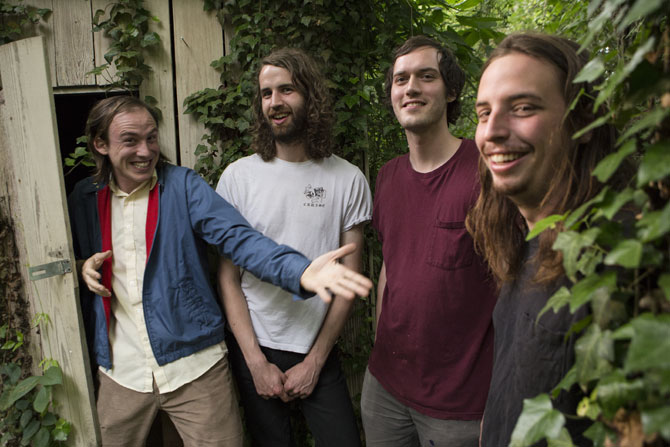 Sings For You Now finds Pinecones exploring time and space. On opener “Tears From Your Skin,” the band rides three chords for six explosive minutes. Meanwhile, the chorus to the anthemic “Do Not Move” clocks in at six (equally explosive) seconds. Just as the upbeat “Ocean At the Center” finds its groove, the song stops abruptly, not yet two minutes in.

Orr’s lyrics are veiled yet vivid, with a vaguely transcendentalist lean. The impact of the singer’s words is heightened by his throat-shredding delivery. At times, his thoughts seem to trip over themselves. “These are not our bodies,” he manically intones on the seven-minute “Astral Bodies.” “This is not a song/ There are no safe thoughts/ A constant knife/ Tears through the vacuum of the spirit.”

On “Halo Crown,” Orr plays God, literally: “Traced shapes in the sky/ Then I shot them back down/ Made man in one day/ Then I rested the rest of the week/ I sentenced my tongue/ To a prison of teeth.”

Orr, also a respected visual artist who has created work for musical acts like Harm’s Way and Sunn O))), says his lyrics represent an attempt to connect with a positive universal spirit.

“Everything I write is a form of self-affirmation,” he says. “You know in the movies, when someone’s in a real pickle, and they might die, and they recite [Psalm 23]? If every time you’re singing, it’s that dire—without being dramatic—I think that’s good. It’s like: [Here’s the] present moment; here’s what’s happening; here’s what’s gonna help.

“I enjoy dark music,” he continues. “But it’s often fake. It’s often someone trying to be nihilistic, or dramatic. I don’t care about darkness.”

Despite Pinecones’ penchant for positive thinking, theirs is not a shiny, happy sound. It is tooth-and-nail contentment, tiny victory writ large, the stirring sound of struggle conquered. Arrowhawk owner Alyssa DeHayes calls the group’s music “an optimistic gut punch,” adding that she connected with the music on Sings For You Now right away.

“There’s something really powerful and anthemic about both the album and their live show,” she says. “It combines the fervor of punk, the meditative, expansive space of Krautrock, the solid footing of American rock in the vein of Neil Young and Crazy Horse [and] the repetitive zone where your brain can wander… I’m incredibly proud of them and excited about where things are headed.”

Asked about their future, the group’s members defer, stressing that they feel like they’ve already reached their ultimate goal. “We’ve come to this place where we all feel happy just to be alive, and be a part of this,” says Atoms. Adds Salie: “I think by not having a plan, it makes everything that happens with the band really fun.”

Bassist Ryan Evers concurs: “Whether or not we have another record come out, at the heart of it, I don’t think that’s a contributing factor to us continuing being with each other.”

DeHayes, who also works as a publicist for the Portland, OR-based Riot Act Media, says Pinecones’ humble approach initially took her by surprise.

“When I mentioned that I wanted to do a press push, I think Ben’s response was something along the lines of, ‘You think people would actually want to write about us?’” she says. “Which is a refreshing change from the usual, ‘If you don’t get us Pitchfork, you will have failed us’ that I so often hear on the press side.”

On the Ruth Street porch, as the sun prepares to set and birds chirp nearby, the members of Pinecones share one last beer and attempt to address the nagging issue, aside from the idea of band-as-friendship-maintainer, of why they do what they do. After nearly an hour of uninterrupted conversation, Evers arrives at a very Pinecones answer.

“It’s easier to connect with dark shit than it is to connect with what makes somebody else happy,” he theorizes. “If that happiness is able to be shared through music, that’s groovy. If people [feel the need] to figure out why we’re happy, and why we love each other, and why we do this—checkmate.”