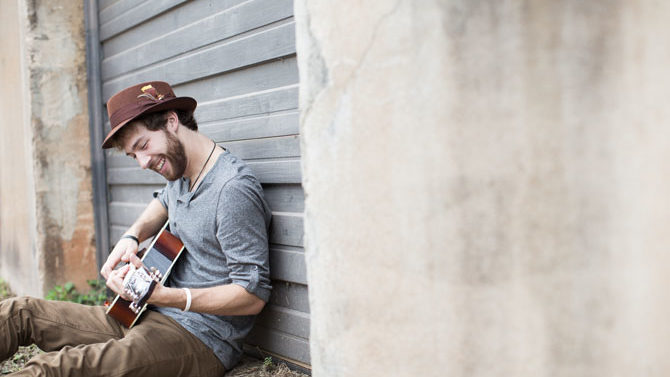 The plane to Los Angeles was departing in the morning. While dozens of freshly selected “American Idol” contestants eagerly awaited the trip without a second thought, Athens songwriter Sam Burchfield clutched his golden ticket and wondered if the prospect of mainstream success was worth sacrificing his musical freedom.

Between the pages of a thick contract lay a daunting reality: Continuing as a contestant on the show’s 13th season meant Burchfield would have to suspend his dream of a solo career in order to conform to “Idol” producers’ demands.

“The thing I really value about music is the freedom to do what I want to do,” says Burchfield. “That was kinda the moment when I said, ‘Screw this, I’m not gonna get on the plane’.”

To some, Burchfield’s decision to quit the popular Fox competition show after making it through the rigorous audition process may seem odd. Thousands of aspiring singers try out for the program each year in hopes of achieving fame and fortune. But for Burchfield, music has never been about those things.

Burchfield’s sound, featuring his smooth voice, bluesy guitar riffs and an effortlessly jazzy essence, had begun to attract fans before the “Idol” experience. During his time as an undergrad at the University of Georgia, Burchfield regularly performed with his band Street Rhythm and Rhyme, making a name for himself in college-scene circles in a few short years.

At UGA, Burchfield was also heavily involved in the music business program (MBUS), where he learned the fundamentals of production and industry standards.

“Sam was a great student,” says MBUS director David Barbe. “He is so into the creation of music and is the best [kind of] music business student, in that sense.”

Burchfield’s “Idol” tryout was not premeditated; a group of friends suggested at the last minute that he give the auditions in Atlanta a shot.

“I got into it really just on a whim, not knowing fully what I was doing,” he says.

After making it through multiple auditions that spanned several months, Burchfield arrived at the final round, where he performed in front of the three celebrity judges—Harry Connick, Jr., Jennifer Lopez and Keith Urban. Staying true to his quirky nature, Burchfield sang “I Wanna Be Like You,” a song from The Jungle Book, accompanying himself on guitar.

“Since I worked at a kids camp, I decided to do a kids song, which I thought was kind of clever,” says Burchfield.

The judges agreed. Two “yes” votes—from Urban and Lopez—meant that he received a coveted “golden ticket,” which would send him to the Hollywood round.

Burchfield’s bliss was quickly tempered by the show’s contract, which the singer received only hours after his audition ended. The sheer length of the document made Burchfield skeptical about its content.

“In the music business program, we talked a lot about contracts,” says Burchfield. “When they gave me this massive contract, that’s when I started second-guessing everything.”

Kaigler tells Flagpole the “Idol” contract was a “kitchen sink deal,” explaining, “Everything that you could possibly imagine that you would want to do as an entertainer is tied into the contract in the very early stages.”

People go into this thinking, ‘this is my only shot,’ and they are willing to do whatever they can to get the publicity.

The contract would have restricted Burchfield from playing shows or recording music outside of the show. It also would have barred him from releasing his finished EP, Where to Run, until one year after the final episode of season 13 had aired. (Due to legal restrictions, Burchfield was reluctant to discuss particulars of the contract beyond that.)

Kaigler has seen many “Idol” contracts, and says a few of her clients have had success on the program. But success on the show, she emphasizes, does not necessarily transfer over to success in the industry.

“No matter how many people are dialing in each week to vote for you, we know that those numbers are not transferring over into record sales,” she says.

Burchfield concluded that the “Idol” stipulations did not align with his long-term goals.

“You can’t go out and build your career while you are a contestant on ‘American Idol’,” says Kaigler. “Sam… has invested in his career for a good amount of time and had a finished project [ready for release]. We had to consider if ‘American Idol’ was a platform that was consistent with who he was as an artist.”

Burchfield’s qualms with the show extended beyond legal matters. Ultimately, he says, he felt like he would be sacrificing his personality in order to “fit the part.” When the musician notified producers of his intent to leave the show, he was told “Idol” executives were hard at work on a “storyline” that would compare Burchfield to season 11 winner (and fellow Georgia native) Phillip Phillips.

“I don’t really like Phillip Phillips’ music,” says Burchfield. “I just need to be me, and that’s it.”

Burchfield, who now lives in Atlanta, says his “Idol” experience soured him on the “big business” element of the music industry.

“He ultimately chose that he did not want to sacrifice the creative vision of his art in exchange for more guaranteed financial success,” says Barbe. “I admire him for doing this, because a lot of people wouldn’t.”

Burchfield says leaving the show was absolutely the right move for him. So why is “Idol” still such a beacon for aspiring singers? According to Burchfield, the answer is simple: Many young musicians believe the show is their only opportunity to make it in a troubled industry.

“People go into this thinking, ‘This is my only shot,’ and they are willing to do whatever they can to get the publicity,” he says. But, he argues, the program presents an inaccurate portrayal of what it takes to make it in music.

“[The show] promotes that you don’t have to put any work into music—you just show up, sing and look pretty, and if they like you, they prop you up with lots of money,” says Burchfield. “Anybody that has been doing music for a long time realizes that the good stuff comes from slow growth and a lot of practice.”

In addition, shows like “Idol,” Burchfield says, are geared towards people who don’t write original material. This is not the case for Burchfield, who brands his own style as “soulful folk.” He released the Motown-inspired Where to Run last January and has since celebrated his post-“Idol” freedom by forming a full band, complete with a permanent horn section.

The group has begun touring in hopes of building a bigger fan base, opening for artists like St Paul & the Broken Bones at the Fox Theatre and selling out Eddie’s Attic in Decatur. This year, Burchfield hopes to record his first full-length album.

And, though his “Idol” experience was a bust, Burchfield says the experience made him more confident as a musician and more focused on his art. He is intent on refining his craft, he says, rather than chasing fame.

“For me, having a career in music is much more than developing a financially successful career—although that would be a nice bonus,” says Burchfield. “My greatest joys come from creating art that is meaningful to me, and sharing it with the people I love.”