It’s Easier Than You Think to Insure Your Music Equipment 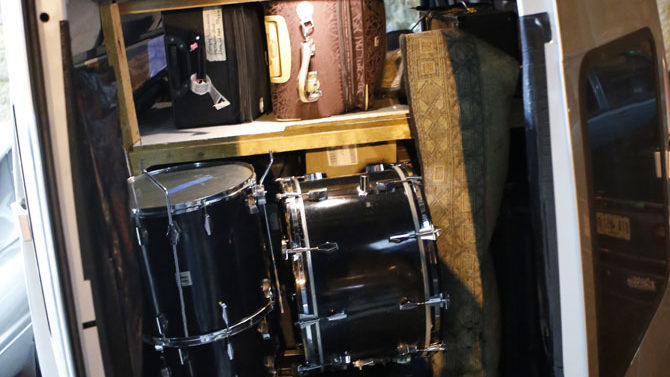 Although imagining the worst and preparing for it isn’t the most fun, if you’re in the business of making music at any level, it’s best to do a little planning. Bad things happen. Most recently and dramatically, Athens band The Powder Room lost a tour van and some expensive gear when their vehicle was destroyed by fire in North Carolina.

More often, damage occurs on a smaller scale: Instruments are stolen, misplaced or accidentally damaged. All musicians know the risks, yet hardly anyone seems to understand fully the murky area of insurance coverage—or how affordable it is, when weighed against the costs of replacement.

The total value of all the musical equipment sitting in practice spaces, rental homes and shared jam rooms all over Athens is anyone’s guess, but it’s reasonable to assume, based on the sheer number of local bands, that the amount runs at least into the hundreds of thousands of dollars.

The Stolen Music Instrument Recovery Project, which bills itself as the “Amber Alert” for stolen instruments, estimates that over 1 million instruments are stolen each year, with less than 3 percent recovered by law enforcement. Decades-long Athens musician, producer and Chase Park Transduction owner David Barbe was cleaned out several years ago.

“I was burglarized a couple of times in the early ’90s… my practice space was broken into,” Barbe says. “I did have insurance, which at least helped me buy replacements for the instruments.”

While burglary and property crime at home are certainly something to be aware of and protect against, a touring band is even more at risk, due to fatigue and unfamiliar surroundings, among other factors.

Most groups who have traveled a bit have some sort of plan for keeping gear in check. Looking back to his early touring days in the 1980s, Barbe recalls, “Mercyland did not carry insurance on the road for the same reason most bands don’t. We never looked into it, because we assumed we couldn’t afford it.

“I have fortunately never experienced road loss, but I know all the stories,” he continues. “I do remember one time… sleeping in the van on top of the gear, because we didn’t have a place to store it for the night. I figured, if someone was going to steal it, they were going to go through me to get it. Not the best insurance plan, but it was what I had at the time.”

If you lose your gear, you can’t work, which is ultimately a lot more expensive than insurance.

The issue of affordability is key for most local musicians, many of whom live hand-to-mouth. Then there is the fact that most plans suitable for musicians tend to require an already existing policy, such as so-called renter’s insurance, upon which to load the value of musical instruments. There are also the vagaries of each individual policy and the cataloging of covered items.

It’s a time-consuming process figuring out how to get covered, and it can be confusing, especially when all the members of a band—provided they’re not collectively insured as a business—are each responsible for their own coverage.

Athens-based insurance agents Laura Cole Hixon and her father, Larry Cole, are both well-versed in musicians’ needs and spoke to Flagpole with clarity and comfort. Cole, a musician himself—and a fan of his Gretsch drums in particular—says bands should be aware of their options.

“Your policy must be set up correctly,” he says. “A lot of times, people think that if their car catches fire, [musical equipment] is covered… it’s not. Most coverage is an add-on to an existing policy… Some companies will let you have a standalone policy [for instruments], but tenant policies are very inexpensive.”

Hixon mentions inland marine polices as another good option for musicians. Originally designed to protect cargo on the high seas, they now cover a range of moveable property, including instruments. Coley Dennis, guitarist for Maserati, speaks highly of his inland marine policy. “It’s attached to my car insurance and costs me about 10 dollars a month and covers everything,” he says. “If something gets stolen, breaks, gets lost in transit—it’s all covered.”

Barbe hopes incidents like The Powder Room’s—at the time of the van fire, the band’s equipment was uninsured—open local musicians’ minds to the necessity and attainability of coverage.

“Once I got into the studio business, I needed both liability insurance and insurance on the equipment,” he says. “What I discovered is that it is surprisingly affordable when compared to the potential loss. The gear is covered, even if I take it out of the building, including going on tour.

“I highly recommend that any touring band look into it and budget it in, just like practice space rental and van insurance,” he continues. “It might seem like a luxury the first time you write the check, but the fact is, if you lose your gear, you can’t work, which is ultimately a lot more expensive than insurance.”

Still, Barbe admits, no matter how good one’s insurance coverage is, some things are irreplaceable. The burglars who took his gear 20 years ago “also stole every 4-track cassette of every song I had ever written to that point in time, and all of my children’s Christmas presents,” he recalls. “Neither of those were covered.”