Jim White and Packway Handle Band Team Up to Throw Down 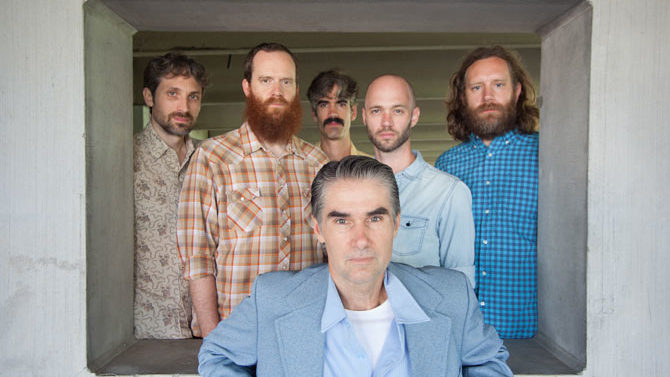 Take It Like a Man, the new local album from bluegrass group Packway Handle Band and swamp-folk troubadour Jim White, arose from a shared desire to break free of expectations and limitations. White, a serious-minded singer-songwriter known for his intricate, equivocal work, first encountered his future collaborators at a low-key coffee shop gig some seven years ago.

“It looked like they were having fun,” he recalls. “I looked at them with winsome feelings, like, ‘I wish I could have that much fun when I play.’ I always look like I’m going to the dentist when I’m onstage.”

Their first team-up came when the Los Angeles music blog Aquarium Drunkard commissioned White to record a song for a Christmas-themed compilation; White selected Desmond Dekker’s “Israelites” and recruited Packway as his backing band. When White produced Athens folk duo The Skipperdees’ debut in 2013, he again asked the bluegrass ensemble to contribute music to the project.

When it came time for Packway to follow up their 2010 album, What Are We Gonna Do Now, the group phoned White and asked him to produce. Soon, though, it became clear that White’s role would extend beyond the boards. “I just thought, ‘I don’t want to be a producer, I want to be part of the process,’” he says.

“We certainly shifted gears quite a bit” once the collaboration was established, says Packway banjoist Tom Baker, a new father sporting a six-month beard and slight bags under his eyes. The musicians began fervently trading ideas, deconstructing and reconstructing songs that had once seemed set in stone. “We came from very different places,” says Baker, “but it converged in a way that really worked.”

Baker says the project was a chance for Packway to explore new avenues of song; similarly, White says the project allowed him to finally explore a sound he had known and loved since he was a child.

“I’ve written bluegrass-style music all my life,” he says. “I grew up listening to white gospel, and what have you. But I was always labeled an Iron & Wine, folkie kind of guy. Whenever I’d give [the labels] a bluegrass song, they’d [turn it down]. So, it seemed like my opportunity.”

On Take It Like a Man, the two approaches converge best on White’s songs, like the gorgeous, plaintive “Sorrow Shine,” which features vocals courtesy of Hope For Agoldensummer’s Claire Campbell, or “Jim 316,” where White recalls an awkward encounter with rockabilly legend Sleepy LaBeef and equates a favorite watering hole with a place of worship while Packway strums amiably along. Opener “Smack Dab In a Big Tornado,” a typically White-ian tale of personal (and, in this case, physical) upheaval, features a flurry of fiercely picked stringed instruments and Campbell’s unmistakeable croon.

The latter song represents a rare moment of impulsivity for the Packway crew. “[That] is something that doesn’t really happen with our band,” says Baker. “We tend to plan very meticulously. ‘Tornado’ was [a song] we hadn’t planned on doing.”

That spontaneity is reflected in the record’s ebullient feel. “They have an incredible chemistry,” says White of his partners. “My goal was to not mess with that chemistry too much but still push them in a different direction than they’ve been. During the recording process, he adds, “the arc of their interests and mine coincided nicely. And, all of the sudden, it made sense.”

Still, both parties admit there was a fair amount of push and pull during the album’s construction; songs were shelved when agreements on arrangement or tone couldn’t be reached. Appropriately, the record is credited to “Jim White vs. The Packway Handle Band,” a tongue-in-cheek nod to its strong-willed creators’ stubbornness and determination.

But the common ground was undeniable, and White says the project was a needed break. “A lot of times my songs are far-flung, and I have to spend weeks trying to figure out how to make them cohesive,” he says. With Take It Like a Man, “there was a cohesive center right from the get-go.”

The next challenge is making the album work in a live setting; White jokes that his partners’ musical prowess so far surpasses his own that it’s not quite a fair scuffle. A February tour, which kicks off Friday, Jan. 30 in Waverly, AL and hits Athens the next night, will feature the newly minted ensemble playing songs from the new record and each party’s individual catalog, as well as a few new collaborative efforts and “a couple covers,” according to Baker.

Despite what happens onstage—and don’t expect any actual fisticuffs—Take It Like a Man stands as a fine representation of collaborative mayhem of the barely controlled kind. Hopefully, it will also encourage other local musicians to break out of their comfort zones—to pick up their instruments, come together and fight for their right to get free.