Giving Thanks for Athens Music: Could ‘One Less Beer’ Save Our Scene? 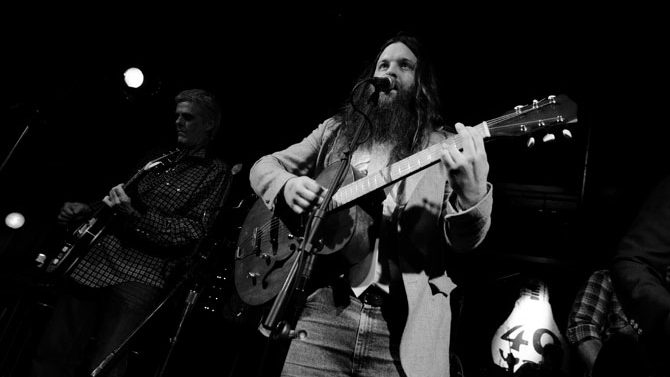 As a hard-gigging singer-songwriter and an employee of at least two storied live-music emporiums, Matt Hudgins has witnessed the creative tide ebb and flow over the 15 years he has called the Classic City home. And though many club owners are reluctant to discuss particulars on the record, the prevailing sense in 2014 seems to be that Athens music is in the doldrums, economically speaking: Fewer paying customers scattered over a greater number of stages means more musicians—and the venues they play—are in effect barely scraping by.

Earlier this year, Hudgins created “One Less Beer,” a social media movement that urges members to commit to paying for at least one local concert ticket each week. Flagpole caught up with Hudgins to chat about the group and what his unique perspective tells him about the current state of Athens music.

Flagpole: Where did the idea for One Less Beer come from?

Matt Hudgins: I’ve been in town for 15 years, now, and work at a lot of shows with [Flagpole columnist] Gordon Lamb, who has been here longer, and we have had plenty of discussions about how the $5 show is the only thing that hasn’t gotten more expensive since we’ve lived here.

Last month, I worked an incredible bill at the Caledonia, [where I] spoke with several locals about how awesome it is to live in a town where you can wander into a club, pay five bucks to see your buddy’s band and luck into also seeing two touring acts you’ve never heard of but who blow your—and the other 20 people’s—minds. The flip side of that is, at the end of the night, I got to split up those 20 people’s money and give very little to two bands from New York who [had] a lot more road between themselves and home, even after both the locals declined to be paid.

I realized how much I take for granted the music scene here, and that I need to make “supporting the scene” an actionable plan, instead of just an abstract position I hold… The idea of One Less Beer is to commit to pay to attend one show a week, because even if you’re broke (I am; most of us are), you can drink one less beer at a bar and it will pay your cover at a show.

FP: Why do you think attendance is down?

MH: There [are] a lot more venues now than there were just a few years ago. When I first moved to town, the west end of downtown was pretty much just the 40 Watt, Caledonia and sometimes the Engine Room, or you could cross the DMZ and see something at Tasty World. Now, there [are] probably four times as many venues in town competing for music fans’ door money.

Besides that, UGA has gotten much more competitive. When I got here in 1999, I pretty much blew off class and drank with my friends. It’s a lot harder to do that now, and you’re wasting a lot more money if you do. Most venues count on weekends to help them get ahead, but those Monday-through-Wednesday shows keep the lights on.

The whole point is to hold ourselves accountable to actually support the scene with our money and our time, at least for one night a week.

[Also], I think there’s a general creeping apathy about the scene among musicians and fans. I readily admit I am guilty of this as well. In the interest of full disclosure, I haven’t had a drink in almost two years. But there [have been] dozens, if not hundreds, of shows I fully intended to go to over the years, but stopped somewhere first to get a few cheap drinks and then just ended up “pre-gaming” until last call. A lot of nights, I would count out my cash and mentally calculate exactly how many drinks I could afford, and pass up a show because that one extra Jameson shot was more important than seeing a band I’d been looking forward to for months.

And I think a lot of bands are just used to not getting paid and no one showing up, so they don’t really put their heart into promoting. I’ve done that, too. Most of the musicians in this town don’t play to any real end. They’re just musicians; they have to make music to get through all the other bullshit in their day. So, booking a show and then just showing up works fine for their purposes, but maybe there’s a touring act who was counting on local support to get them gas money for the drive to the next town.

FP: How has the increase in free and donations-based shows impacted the music scene?

MH: I’m not going to wade into the debate about how club owners should run their businesses. I think if half the people sitting around a table on the Max patio arguing about their economic theories of music on any given night would just go pay five bucks to see a show for an hour or two, the problems in the music scene would sort themselves out.

Yes, there are free shows in town. If you want to “One Less Beer” it, but the club refuses to accept your cover money, go to the merch table and buy a 7-inch, or some stickers, or even just give the band a five-dollar bill. The whole point is to hold ourselves accountable to actually support the scene with our money and our time, at least for one night a week.

Remember, I’m a bartender, and I make 95 percent of my income from people buying beers. I’m not trying to discourage people from spending money at bars. But I honestly would rather have 10 people at a show who are excited to be there and only buy one beer each, than one guy who begged himself onto the guest list because he’s “broke” and then proceeds to buy 10 beers.

FP: Do you sense a different attitude among showgoers now, as opposed to eight or 10 years ago?

MH: Yes and no. The music industry as a whole has changed too much to pretend it hasn’t changed locally, but Athens is still pretty much Athens. It’s just that while we could get away with being called a “music town” 10 years ago, when there were only like five places to see bands, now we need to step up our game a lot as musicians and fans, or else we’re going to start seeing venues close… and a lot of musicians without a dish pit to work in or a stage to play on.

I was all about fighting a Walmart downtown when that was all going on a few years ago, but it’s a lot harder to remember that not only the venues, but also each local band, is itself one of those small local businesses I was claiming to support. Turns out, Walmart isn’t the only threat to those businesses. It’s a lot easier for me to slap a sticker on my guitar case than to remember to actually support that band or venue, but I’m making the effort now, and I hope some other people will, too.

FP: How can we improve as a music community?

MH: That’s easy: Go to shows. The One Less Beer thing is really just about shifting priorities. It’s not that big a deal to not drink every dollar you have on any given night, and to pay a cover or buy a band’s record instead. I’m not at all preaching sobriety here… Come buy a beer from me or one of my well-qualified associates, by all means. Some of my favorite memories in Athens are of sitting in a bar telling fart jokes with a few friends and a bunch of random dudes while an old “Simpsons” episode was projected silently on a wall. Keep doing that, or whatever else is your thing, in good health and with godspeed.

I really and truly believe, however, that if we all take one night a week to somehow monetarily support a local band or musician, we [can] make a hugely positive impact on the Athens music scene, which is itself constantly making an impact on the world.