Black Kids and the Art of Indie Rock Rebirth 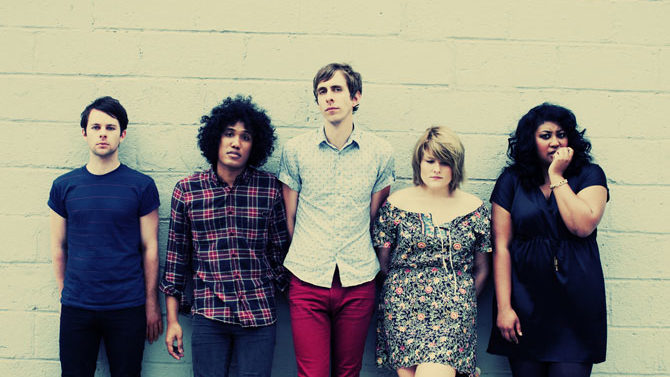 A quick refresher, if you’re having trouble placing the indie-pop group Black Kids: They played an instantly legendary show at an early Athens PopFest. Their song “I’m Not Gonna Teach Your Boyfriend How to Dance With You” showed up in movies like Role Models. Their Wizard of Ahhhs EP was the soundtrack to your carefree, sun-splashed summer, way back in 2007.

The four-song collection, self-released via MySpace (2007!), received a barrage of acclaim. Pitchfork writer Marc Hogan gave the EP an 8.4 rating out of 10 and slapped a Best New Music tag on it, writing, “Black Kids make catchy, tightly executed songs that put a memorable stamp on pop’s classic themes.”

Beyond the blogosphere, dailies and glossies alike came calling: The New York Times wrote that the band was “one of a handful of must-sees” at that year’s CMJ festival, calling its music “peppy, clap-along, brittle pop, unpolished but immediately likable.” Rolling Stone and NME also gushed. Soon, the band was playing international festivals to tens of thousands and touring with groups like the Kaiser Chiefs—all without a full-length to its name.

“That was a bonkers situation to be in,” says singer and guitarist Reggie Youngblood. “I doubt anyone could deal with that craziness. You know how every year you hear about a buzz band canceling shows and citing ‘exhaustion’? That’s a reasonable thing to do. We never said ‘no’ to anything. It’s OK to say ‘fuck no’ sometimes. Morrissey does it all the time.”

The constant touring began to take a toll on the group. In 2008, Youngblood told the Salt Lake City Weekly, “I feel like I’m about to fall down, actually… But this is what I’ve been working towards for years, so you just do it. That’s all that matters.”

Far from garnering the same breathless praise as its predecessor, the album was met with a bunch of vaguely positive assessments, a few negative reviews and one outright instance of cruelty: Pitchfork, the site that had set Black Kids on a path to stardom, published a review that consisted of a JPG of two frowny-faced dogs, the word “sorry” and an “uh-oh face” emoticon. The accompanying rating: 3.3.

As swiftly as it had landed in the buzz bin, Black Kids fell into obscurity. The blogs that had so vociferously championed them moved coldly on to the Next Big Thing. The next time the group showed up on Pitchfork, it was for a 2011 feature titled “One-List Wonders.”

“We don’t harbor resentment,” Youngblood says about being thrown through the hype-machine wringer. “That would be really, really sad. Also, if you’re willing to accept praise from someone—which we were—then you should be willing to accept the criticism, as well. Especially if that criticism is two cute puppies.”

After releasing the Cemetery Lips EP in 2009, the group fell silent. Two members started families. Bassist Owen Cohen moved to Brooklyn and struck out on his own as Gospel Music. Meanwhile, Youngblood relocated to Athens and began playing around town with his power-pop project Night School.

But recently, there have been rumblings of rebirth in the Black Kids camp. Last year, the band entered The Glow Recording Studio, laying down tracks for an upcoming second LP with local engineer and longtime friend Jesse Mangum, who recorded Wizard of Ahhhs before decamping to Athens from Jacksonville, FL.

Youngblood stresses that there are “no definite plans [for its release]. We spent a couple of weeks [in the studio], working on ideas, and now we’re on tour trying them out live.”

If Black Kids is to make a grand return, now is the perfect opportunity for a group that has always been ahead of its time. In 2014, it’s common for musicians to release material exclusively online, but in 2007, it was still a somewhat radical concept. (Reviews of Wizard of Ahhhs now read like blasts from the past. “It’s not available in stores,” Hogan marveled.)

And even if listicles can be said to represent a new era of cultural criticism, that distribution model has also lessened said criticism’s influence. That is, when fans can explore new music with a few simple clicks, they’re free to form opinions without being told what’s the Best of it and what’s not.

But if Youngblood senses a redemptive narrative emerging, he’s not letting on, saying he just wants to “start playing out more, and wrangle our songs into an album. Just finish what we started for our long-suffering friends.”

It’s surely no coincidence, at least, that Black Kids’ reemergence is centered on the town that first put the group on the map. Despite the ensuing drama, Youngblood recalls that fateful 2007 show with fondness.

“I love that it happened in Athens,” he says. “It was already a special place to me before then. I remember that we made these bobo CD-Rs—we used some Peter Saville font for the track listing—and after we played, everyone wanted one. Probably for the font.

“It was [at] Little Kings. The Pains of Being Pure at Heart played after us. Looking back, it feels portentous, because it was our first time playing out of Jacksonville,” he continues. “And then everything happened.”