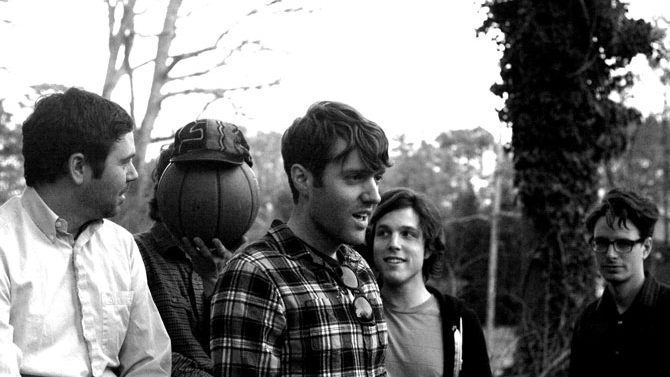 Dalliance, the sophomore record from Atlanta’s Gold-Bears, is a Trojan horse of sorts. At just over half an hour, the record is a dense burst of bright guitar-pop, with just a few of the 11 tracks making it past the three-minute mark. Into this condensed format, however, songwriter Jeremy Underwood manages to smuggle a stunning amount of sadness and bile.

At first glance, it’s all down-strummed barre chords and tight drumming, cheery melodies and big choruses. Only after repeated listens do things start to get ugly, barbed lines tearing through the cheery fabric, like this one from “Chest”: “You said, ‘Give me one reason to live/ Because I’ve heard all your bullshit.’ ”

Dalliance passes through melancholy, regret, frustration and unfiltered rage, and the album is structured in such a way as to place the listener in the center of this emotional maelstrom. Opener “Yeah, Tonight” starts hopeful and turns bitter, like a weekend night that veers off course. We go from there to the one-two punch of “Chest” and “Death with Drums,” a scuzzy organ filling the latter track like a dirge.

This is a breakup record and unabashedly so. Underwood describes the lyrics’ subject matter in plain terms.

“The whole record is about [how] I was married and I got a divorce, and before we got divorced we had a child,” he says. Underwood concedes that there was a measure of catharsis at play in making such raw material—“This was kind of a closure record for me”—but whatever comfort there is seems clearly to be external to the lyrics themselves.

Asked if the band had made any effort to leaven the darker material with something less weighty, Underwood demurs. “Not necessarily. I think the whole thing is pretty angry and depressing.”

Of course, the music itself provides the counterbalance. If John Darnielle of The Mountain Goats might be said to provide one model for how to handle emotionally harrowing material in song—namely, to weave it all into one poignant whole—Gold-Bears seem to favor another. The band’s approach comes closer to that of a band like The Thermals: Just put the rough stuff out there, trust the band to translate the singer’s anguish into exuberance, and let the melody make up the difference.

“Memo” sprints through two clipped verses, soars to a big minor chorus, then does it again, all in just over a minute and a half. On “Yeah, Tonight,” the band is joined by Emma Cooper of London’s Standard Fare, and her mellow voice helps to temper Underwood’s rancor. There are moments when Underwood himself lapses into a more wistful tone, as on “From Tallahassee to Gainesville.”

It’s this more thoughtful tone that prevails on the three songs about Underwood’s daughter: “I Hope They’re Right,” “Hey, Sophie” and “Fathers and Daughters.” The last of the three is the record’s closing track, and also its best. The song finds Underwood speaking to his daughter directly. The lyrics are a list of criticisms he might have as a parent, couched, as he explains, within the larger context of his own insecurity and regret. “How can I tell my daughter to be a good person when I’ve done all these terrible things?” he asks.

Underwood’s explanation is illuminating. At times in the song, it seems like the speaker’s criticisms could be directed at himself (“Who am I to tell you to stop drinking?”); at others, he could be speaking to an ex-girlfriend (“Who am I to tell you… that your last boyfriend and all his friends are just punks?”). This ambiguity only underscores the emotional muddle that prevails throughout.

Not that said muddle translates to the group’s live performance. If the record opens up space for reflection, the show aims for something more visceral. For Underwood, the goal is to plow straight ahead and leave the slower songs out of it. Gold-Bears’ stop in Athens comes at the tail end of a two-week stint along the East Coast. Underwood says the set will be fast, loud and short. “We play probably 25 minutes,” he says. “All the punk songs off the records, and that’s it.”