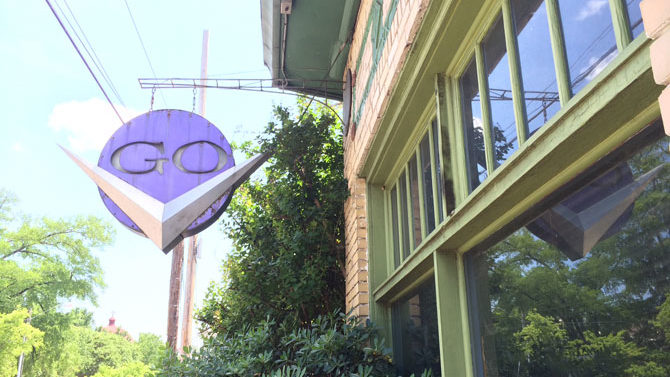 For many, the phrase “open mic night” conjures cringeworthy scenes of half-baked 20-somethings mumbling their way through unsteady Incubus covers, or tone-challenged singer-songwriters premiering their latest acoustic abominations. But walk into Go Bar any given Monday night, and you’ll find a bunch of folks challenging that most hallowed of college-town conventions.

The aptly named gOPEN MIC series began last summer, when local musician Jared Collins and his psych-pop band k i d s had a series of shows fall through on their first-ever East Coast tour. After seeking out and playing several New York City open mics, Collins realized there was a need in Athens for a more open-minded weekly event. Says Collins, “We thought, ‘Shouldn’t there be an open mic for bands, so they can just show up and play?'”

Since its inception, gOPEN MIC has paid it forward, playing host to a number of out-of-town bands who have found their planned local shows canceled upon arrival. Collins recalls a recent Monday when three touring acts called him up, having heard of the Go Bar series through a friend. All three ended up performing to a sizable and enthusiastic crowd.

“I’ve never really been a big fan of open mic shows,” says Xander Witt, a guitarist for punk band Muuy Biien and the sole member of experimental drone outfit Gyps. “This one is more up my alley. You can go in there and make a lot of noise, and people are just as appreciative [of that] as a singer-songwriter set.”

“Every once in a while we’ll have people come from Hendershot’s next door,” he says, referring to the other, more straightforward open mic on the block, which also happens Monday evenings. But he stresses that gOPEN MIC is “a later-night kind of thing. We don’t even get started until midnight most times. I’ll let the list fill up from like 10:30 p.m. until there’s a good crowd, and then I’ll divide people up. I try to leave a good chunk at the end [of the night], in case people show up and want to play.”

The list isn’t limited to musicians. Already, the event has hosted poets, comedians and essayists, to name a few, and local magician Jeff Morris performs “most weeks,” according to Collins.

The fervent commitment to variety, in addition to the late-night vibe, makes for an often chaotic atmosphere. “It’s kind of complete anarchy,” admits Collins. Witt is less polite. “It often ends up being kind of a shitshow,” he says, “but no one really minds. You can laugh and have a drink over it.” In terms of performing, adds Witt, “It gives you a chance to kind of improvise and play around with friends… It can be a real bonding experience.”

Perhaps most significantly, the event has served as both breeding and testing ground for local musicians. Improvisation and collaboration have always been tenets of the Athens community, but it’s rare—outside the underground house-party scene, anyway—that artists are given such a platform for their experimentation.

In fact, the recent explosion of experimental bands in Athens can be tied, at least peripherally, to gOPEN MIC. According to Collins, many of the acts who played The World Famous’ recent Experimental Mondays series grew from seeds planted at his event. “The cool thing is when it works out,” he says, referring to the partnerships that have formed as a result, some seemingly by accident.

After taking a hiatus due to low turnout, which Collins attributes to the long winter, gOPEN MIC has returned to Go Bar Mondays and is reportedly more popular than ever. Collins encourages anyone who’s curious to brave the Prince Avenue crosswalks and check it out. Just make sure you’re ready to perform for a crowd: Collins says he makes a point of signing first-timers up for primetime slots. But there’s no reason for nerves. “It’s pretty chill,” he says. “You’re not gonna hurt anybody’s feelings.”

When asked what he hopes for gOPEN MIC going forward, Collins’ response leaves no doubt about his penchant for both mayhem and inclusion: “More stuff.”