Thee Silver Mt. Zion Makes Noise for the Love of It 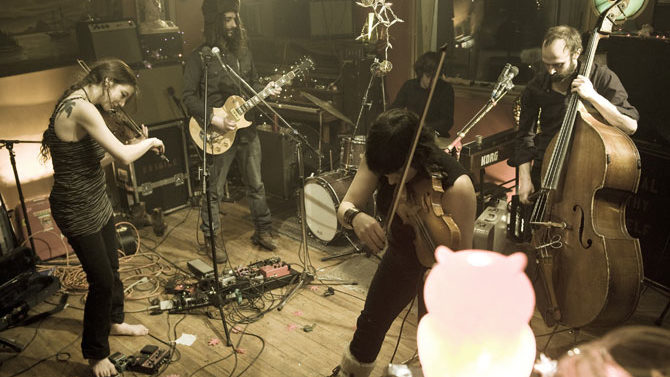 Press play on Fuck Off Get Free We Pour Light On Everything, the seventh album from Montreal, Quebec’s Thee Silver Mt. Zion Memorial Orchestra, and a child’s voice slips through the speakers: “We live on the island called Montreal, and we make a lot of noise because we love each other.”

The voice is that of singer, guitarist and founding member Efrim Menuck and violinist Jessica Moss’ young son, Ezra. This unfiltered revelation at the beginning of the album’s opening song, “Fuck Off Get Free (For the Island of Montreal),” serves as a preamble to a marching anthem and a declaration of hometown pride that swells with spontaneity and passion.

It’s also a telling metaphor for the album. “It felt very much like a fight standard when we were writing it,” Menuck says. “Everything else kind of fell into place after that.”

With Fuck Off Get Free, Thee Silver Mt. Zion delivers a raw and energetic stream of disjointed images of rebellion, blues-afflicted poetry and some of its hardest-rocking excursions yet. It’s a massive album that draws strength from the balance it strikes between blaring volume and wafting subtlety.

There is no avant-garde any more. In 2014, any artist can do whatever they want to do. There’s still a shit-ton of stuff that will marginalize you, but it doesn’t have anything to do with form.

The musical sprawl that connects the opening number with an emotional roller coaster ride, from “Austerity Blues” and “Take Away These Early Grave Blues” to “What We Loved Was Not Enough,” is refined in its approach, yet stormy by design. Wielding such a divergent palette of sonic forms with aggression and abstract civic gusto is all part of the plan.

“There is no avant-garde any more,” Menuck declares. “Everything has been done already, and all of the formal barriers have been torn down. There was a time when you could make political statements with form, and you could draw attention to the fact that you were doing something different. But in 2014, any artist—anyone who’s doing anything—can do whatever the fuck they want to do. There’s still a shit-ton of stuff that will marginalize you, but it doesn’t have anything to do with form.”

The examination of modes of expression is an underlying theme for Thee Silver Mt. Zion’s musical evolution. As the story goes, in March 2000, Menuck, a co-founder of the post-rock large ensemble Godspeed You! Black Emperor, unveiled a side project of a more personal design. He had conceived of this new group, then dubbed A Silver Mt. Zion, to teach himself how to properly score his own musical compositions.

The initial drive soon changed, though, when fellow Godspeed cohorts Sophie Trudeau (violin and vocals) and Thierry Amar (bass, contrabass, vocals) filled out the band’s lineup. As a trio, with Menuck playing piano and guitar, an austere sound was born as a more democratic songwriting dynamic gave A Silver Mt. Zion a life of its own.

The group’s first offering, He Has Left Us Alone But Shafts of Light Sometimes Grace the Corners of Our Rooms, released via Constellation, embraced a booming but brittle and mostly instrumental sound. Lilting melodies, haunting drones and a deep, dark resonance spread out over eight intrepid numbers. Songs such as “Movie (Never Made),” “Blown-Out Joy from Heaven’s Mercied Hole” and “For Wanda” felt gentle by comparison to Godspeed’s deep sonic valleys and rushing, guitar-driven crescendos.

Over the last 14 years, the group’s sound has grown increasingly broad. Its sparse and undulating drones have steadily gravitated toward a more ornate punk rock sound that revealed itself through such albums as 13 Blues for Thirteen Moons (2008) and Kollaps Tradixionales (2010). Menuck and company also paired with late Athens songwriter Vic Chesnutt for his final two releases, 2007’s North Star Deserter and 2009’s At the Cut.

A result of the emotional and sonic evolution that has transpired in the meantime, Fuck Off Get Free is Thee Silver Mt. Zion’s most lion-hearted collection of songs yet. The tighter focus on songwriting yields stronger melodies, and a palpable sense of chemistry binds the group’s collective musical instincts.

That’s not to say that improvisation plays much of a role at all; songs such as “Austerity Blues” and “What We Loved Was Not Enough” are built upon solid musical structures that hang in a balance of high-energy and complicated melancholy. Everything emerges as an amalgamation of punk, folk, metal and modern classical elements, sculpted by a band that functions as one musical and intellectual unit.

“We write it all together in our shitty little jam space,” Menuck says. “Sometimes it’s all worked out in the process of getting from point A to point B. We figure out a lot on the road as well. Any given song is kind of like a tomato plant: After a while, they just kind of stop growing.”

But that’s only partially true when it comes to the band’s live show. “At the end of the day, it’s just a tiny chunk of history when music has been a recorded medium—right around 100 years,” Menuck says. “Outside of that century, it was always something that was played and experienced live. And live has always been the focus for us. It’s even more of our focus [now], since no one is buying records anymore.”

For Menuck, the mystique lies in the intangible tension that develops between an audience and a performer. “Some of our favorite shows have been some of the most miserable experiences,” he says. “Finding ourselves face-to-face with miserable audiences, not having any idea what’s going on in a town, and being there in front of everyone in this room dripping insanity.

“There’s something to be said about living through that,” he adds. “Making a noise in opposition or working with that. We take what we’re given, and work with it.”