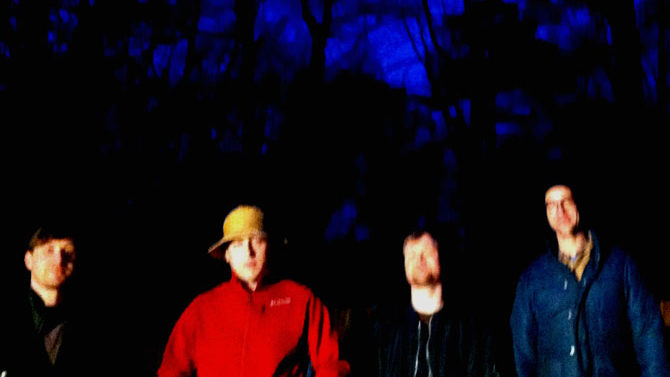 The opening sequence of Stanley Kubrick’s 1968 masterpiece 2001: A Space Odyssey shows an ape poring over the bleached bones of a dead ox. After studying the scene intensely, it reaches down and picks up a bone and, with increasing strength, begins striking and smashing the corpse. The expression on its face changes from curiosity to amazement to triumph. The ape has simultaneously discovered tools and weapons.

The members of longtime experimental music crew Future Ape Tapes tell Flagpole what it means to be a “future ape.” Says co-founder Thomas Valadez, “A future ape [plays] with the idea of de-evolution. It’s an expression of the emotional counter-current to the intellectual evolution of our society, where the idea of reverting to a more primitive mode of existence seems endangered by the unifying force of technology.”

The Apes’ other co-founder, Donald Whitehead, goes further. “[It’s] music for after the fall. A future ape is someone who recognizes de-evolution and embraces it in totality. There is a duality to our lives here, and I’d like to think a future ape accepts that and moves forward.”

It’s all pretty much what one would expect from a project that named its 2006 debut Fuck the Future. Over the past eight years, the duo has produced 12 seamlessly clever and intriguing recordings that have often seemed to come totally out of left field. It would also be difficult to overstate the music’s steady pattern of arrogance-free confidence.

The pair met while in college in Milledgeville, GA in 2000. When they returned home to Athens in 2005, they named their budding project after Whitehead’s home studio, which he had in turn named such as an homage to legendary dub-reggae producer Lee “Scratch” Perry. Although the band’s early focus on hip hop could have easily pegged its needle permanently in that direction, the truth is Future Ape Tapes has always been reaching outward.

Whitehead mentions that he and Valadez developed a a taste for severe musical tangents many years ago; fans of Future Ape Tapes first heard this in earnest on 2010’s Figure Eights. “I’ve always felt that the changes over the years have been natural and have mostly been a result of the band just following its own muse,” he says. “I feel like the hip hop years were really the most experimental of all.”

Indeed, the gristly, unnerving noise that creeps through the band’s newest album, Lives, isn’t all that new to the band. “Thomas and I had been making similar music, relative to what we are making now, for a very long time before the hip hop thing started happening,” says Whitehead. “Hip hop is still very important to us in lots of ways. I’ve always liked low-frequency music… I also like the improvisational quality of hip hop and the importance of being direct. It is content-driven music.”

Lives is the first album to feature Future Ape Tapes’ new, expanded lineup, with the original duo plus local musicians B. Wood and Thom Strickland. Getting further away from the cut-and-paste method of its early, beat-based recordings has led the band into playing live in the studio more, too.

“One thing that we really focused on with the hip hop production was writing all our verses as a group and doing a lot of one-takes,” Whitehead explains. “Lives is played almost totally live with various post-production applied. The vocals, guitars and drums were all played live at The Glow Studio. Most of our other records have a lot more multi-tracking in the production process.”

Valadez reveals that Future Ape Tapes has already completed an even newer, as-yet-untitled album at The Glow Recording Studio and is joined on it by musicians Ash Rickli and Nick Givens. For his part, Strickland describes this secret set of recordings as “very Kraut-drug-punk.”

The artistic impulse is sometimes served best not by direction but, rather, by merely having tools and weapons with which to create, undermine or destroy. Future Ape Tapes wields these tools with intelligence, wit and a craftsman’s dedication to task.

“The goal [in the beginning] was to instantly gratify ourselves by going to the edge as opposed to the center,” says Valadez. “When we make music now, it is always a diversion in some way from whatever gets too familiar… We are taking part in a process of deconstruction that is endlessly gratifying, at least to us—and it offers a lot of freedom for anyone.”