The Spectacular Surprise of Faster Circuits 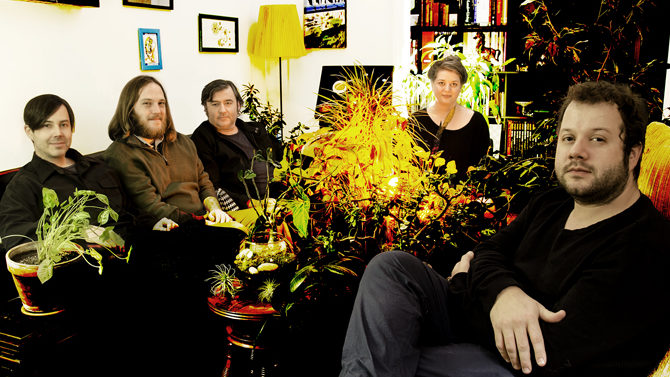 Standing large among the vast list of albums released by Athens bands in 2013 was a record that hardly anyone had any idea was even being made. Built slowly by the collaborative hands of bandleader Derek Almstead and a carefully selected group of players—including former Athenian (and Flagpole contributor) Jeff Tobias, Carlton Owens, Emily Growden and the late Craig Lieske—Tunes of Glory, the debut album by Faster Circuits, was a mysterious psych-pop gem that took even the most ardent local music fans by surprise.

Although the album was constructed carefully during a years-long session of fits and starts, Almstead never meant for Faster Circuits to be a studio project. “[I’d always envisioned it as] a band… I wanted to play with some people that were outside the normal group of folks I always played with, which is all the Elephant 6 people,” he says. “I love [them], but I’d already played in a ton of bands like that. I work at the 40 Watt, and Jeff Tobias was working with me, and we talked about music all the time. I just liked him… He was kinda wanting to play guitar and was coming at it with a plan.

“The theory at the time was, it would be counterbalanced with Craig,” he continues. “I wanted Craig, because he could play crazy, wild stuff… I had this dream of him being, like, this caged animal that occasionally I’d let loose and he’d just like shred all over things—but then the rest of the time [he’d] be reined in, so it wouldn’t always be chaotic.”

The actual crafting of the album took a long time—some songs had languished for as long as six years—but it’s clear Almstead knew what he wanted from the start, down to re-imagining the instruments used.

“I’d seen Chris [Herron] do some really cool things with thumb pianos at a couple of improv things at the Watt over the years, and I really wanted to have some sort of distinctive keyboard element that was not just like regular rock and roll or pop keyboard-style stuff,” Almstead says. “I had this idea of making it more like a percussion instrument, but doing it in this kinda space-age way. So, I made him this special version of a piano that’s arranged more like an African thumb piano.”

Both Almstead and Growden point toward Lieske’s untimely passing in January 2013 as a key impetus in bringing Tunes of Glory to fruition. “It seemed to me that [Derek] was spurred to finish it when Craig died,” says Growden. Almstead concurs. “That’s true… Chris knew that I’d had Craig do a couple of overdubs [on the record]. When he was putting together a compilation for his memorial service, he asked me if I would be cool with putting those things on it, and I was like, ‘OK, of course.'”

The task of going back and working on these songs, and becoming artistically and emotionally involved with them again after they’d lain dormant for about a year and a half, reminded Almstead why he’d been doing it in the first place: to get the music out of his head and down on tape. He put his head down, working every day for two months until the album was finished.

Up until the time of its release, though, Almstead barely spoke a word about it. “Maybe I felt a little embarrassed that it’d taken so long,” he says. “I didn’t want to promise [anything]… because if I had told you, and six years later you’re like, ‘What’s up with this record?'”

When it finally did emerge, the reception was overwhelmingly positive. Almstead makes clear he wished for a different experience and sound than he has had over his almost 20-year association with the Elephant 6 Collective, during which time he’s been a part of bands like Elf Power, Olivia Tremor Control and of Montreal. Yet it was his old friend and bandmate John Fernandes who jumped at the chance to release the record on his Cloud Recordings label.

“I sent copies of it to a bunch of my friends, and John [said], ‘Man, I really like it, I can put it out. I’ll just put it out digitally,’ and I was like, ‘Perfect’,” Almstead says, then adds, jokingly, “Because I’d feel terrible asking [him] to pay to put out the debut album of a 38-year-old man who’s well past his prime.”

The live version of Faster Circuits includes Herron, Growden and of course Almstead, along with A.J. Griffin. While Tunes of Glory is certainly a great achievement (and a choice example of not letting a long-term idea die on the vine), it’s the live lineup that has solidified the group’s place in the current crop of Athens music projects. It’s this configuration that’s given new life to the wonderfully expansive yet tightly wound and deliberate pop-psych compositions from the album—and the one that will usher in the next phase of the project.

“I’ve been working on the next record this winter,” Almstead says. “Not as much as I’d hoped, but pretty consistently. A lot of it was stuff that I was already working on, and some of it is brand new material.” Also, he adds, “I’d like to go on tour.”

With the swell of enthusiasm surrounding Tunes of Glory at his back (it came in at No. 4 on Flagpole‘s year-end best albums list), a crack lineup at his side and headphones plugged diligently into his console, Almstead is in the catbird seat. All that’s left is to hope the next record doesn’t take another six years.