Vincas and The Powder Room Recover from Tour Theft 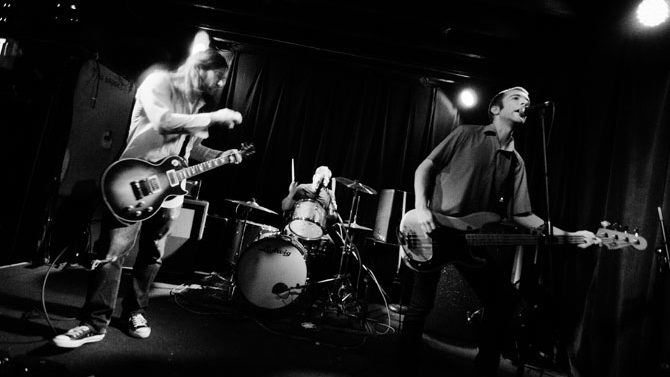 On Friday, Nov. 8, local rock bands Vincas and The Powder Room played a show in Chicago, at a Logan Square spot called Quenchers Saloon. The next morning, they woke up in a friend’s Wicker Park apartment and walked the block and a half to their van, which they had parked across the street from a 24-hour convenience store. When they arrived, they found that the vehicle’s side window had been smashed out—and most of their equipment was gone.

Amps, custom guitars, cables, effects pedals, laptops—basically “anything that could fit out the van’s side window” was taken, says Vincas bassist Chris McNeal, who lost the 1978 Fender P-Bass he had been playing for 17 years. “I can’t even count how many times one of us has slept in the van before on tour,” McNeal says. “And yeah, we should’ve done that. But it was very cold that night, and it just didn’t happen, for whatever reason.”

The bands covered the broken window and headed home to Athens, canceling the remaining two dates on their brief co-headlining tour. McNeal describes the emotional low that followed.

“For the first day or two, I sat there kind of in silence, thinking to myself, ‘What am I doing with my life? Should I continue doing this the way I’m doing it… when everything I own that I care about can be so easily taken from me?'” he says. Gene Woolfolk, who sings and plays guitar in The Powder Room, says that he “only spent the first four or five days [agonizing]. I had several panic attacks, and took several pulls on bottles of whiskey.”

But there wasn’t much time for wallowing. The day after the theft, unbeknownst to the bands, an enterprising Athenian, a friend of McNeal’s named Lindsay Leigh, had set up an Indiegogo campaign, titled the “Vincas and The Powder Room Evil Acts Relief Fund,” to help replace some of the stolen gear. Within days, word had spread, and it had raised over $3,000. (The campaign, whose goal is set at $5,000, is accepting donations until Jan. 8.)

“It was really just about helping some awesome guys get back to playing music,” says Leigh. “It’s such a big part of their lives. I just set up the platform—Athens gave the love.”

Indeed, Woolfolk and McNeal say the success of the fundraising campaign did more than bring them out of the doldrums. It also reminded them of what they loved most about Athens: its indomitable creative spirit.

“Just the fact that a lot of the people who are donating are just as broke as us,” says Woolfolk. “Every dollar counts. It feels really good. You can’t give up if people are helping like that. It’s very encouraging.”

Folks have stepped up to help in other ways, too. The show set for this Friday at the Caledonia Lounge featuring the two bands, as well as local psych-rockers Hot Fudge and Atlanta outfit Spirits and the Melchizedek Children, was booked long before the Chicago incident; once word got out, the others on the bill, and the club, offered to donate door proceeds to the Evil Acts fund.

Unfortunately, what happened to Vincas and The Powder Room is an increasingly common occurrence; they aren’t the first Athens bands to have their stuff ganked on tour, and they won’t be the last. But though they were victims of misfortune, Woolfolk and McNeal admit that they could have safeguarded better.

There are certain crucial steps musicians can take to protect their property. Though not included in most home or auto policies, musical equipment insurance is available through membership in agencies like ASCAP. Bands can also insure gear independently through various companies; one, Music Pro, advertises policies starting at $150 per year.

There are other practical solutions. “Always at least take your instrument inside with you” at every tour stop, McNeal cautions, and watch out where you park your van. And, of course, there’s always the nuclear option. “Stay at home,” Woolfolk jokes. “Leave everything in the museum. Don’t be a dipshit. Don’t play it out of your house. Just don’t try.”

Though a detective is on the case in Chicago, neither McNeal nor Woolfolk holds out much hope that their missing equipment will be returned. Still, thanks to the kindness of others, and a healthy dose of perspective, the initial tragedy has at least been rendered slightly less, well, tragic.

“When it comes down to it, it’s just stuff,” says McNeal. “We can get more stuff. No one got hurt; the van didn’t fly off a cliff.”

Most importantly, the incident has left the bands undaunted. Vincas is writing songs for an upcoming record; The Powder Room has posted early demos for its debut LP to Bandcamp. Both groups will hit the studio in the early part of 2014, with plans for a split 7-inch—and, yes, perhaps even an accompanying tour—in the early stages.