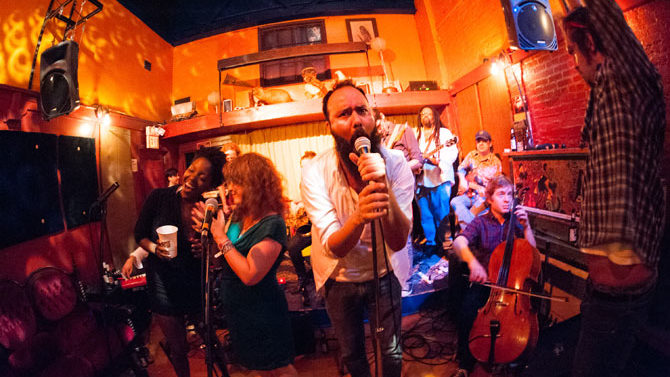 Local musician Jim Wilson spent May of 2008 in the West African country of Ghana, where he filled much of his time with, as he puts it, “play dates” with native musicians. What time was left he spent socializing, making field recordings with a handheld Zoom recorder and soaking up the atmosphere and inspiration. In particular, Wilson says he was struck by a curious phenomenon: many of the local taxis touted written statements on their windows, but in a way that was far more intimate than the traditional Western bumper-sticker.

“Towards the end of the trip, I was relaxing on the roof of the place I was staying at,” Wilson says. “I was listening to the percussion field recordings and looking over hundreds of phrases that I had collected… while [also] mulling over the fact that I ran into several teenagers on the trip that were all listening to early/mid-’90s West Coast hip hop. I started thinking how cool it would be to put those three things together somehow.”

Although he wasn’t formally planning it, this stream of thought planted the seeds for what would become the TaxiCab Verses. The band takes its cues primarily from Ghanaian High Life music—itself a blend of Ghanaian, Western jazz and European instrumentation—and other African styles, such as Afrobeat.

Wilson himself demurs at claiming any expertise or even staking leadership of the group. “As far as the style of music that we do, I see it like this: I’m a dude that is a part of a thing,” he says. “Rather than drive the thing and steer it wherever I want to go, I make it a point to take a more improvisational, find-out-what-happens approach and let the thing take us where it wants to go—with me holding the wheel just enough to make sure everything doesn’t come out too crazy.”

Indeed, collaboration is integral to the entire spirit of the project. Case in point: many of the band’s members live over 5,000 miles away. After befriending Ghanaian percussion ensemble Kofi Atentenben & the Warriors in 2008—the musical spark that first ignited the Verses—Wilson reinterpreted some of that group’s material and recorded it in Athens. In 2010, Wilson and guitarist Matt Stoessel returned to Ghana, where the Warriors laid down overdubs. (Wilson also assisted in completing the Warriors’ album Vorsah!, which translates to Sacrifice!, in 2011.)

“With our rock background, the Athens songs have a 4/4 feel that the Ghanaians adapted to, and the songs that the Warriors contributed had a fixated pulse, a totally different meter, that we adapted to,” says Wilson. “At times, what we ended up with is two parallel rhythms, or even tempos, stuck together.”

Missing from the current lineup is the late Craig Lieske, of whom Wilson still speaks in the present-tense. “Craig is a founding member of the TaxiCab Verses, and had a big hand in a lot of us meeting and playing music together over the years,“ Wilson says. “[It was] probably 10 years ago [that] Craig started asking me to sit in and play and experiment. [He] brought me in to the world of improv. [He] continues to be an inspiration to me, and I know too many people to count that say the same thing.”

With tentative 2014 release dates for both the TaxiCab Verses’ long-awaited debut LP and an EP of traditional percussion from the Warriors, Wilson and his many colleagues have their hands full. When asked about the practicality and functionality of such a long-distance collaboration, Wilson says, “[I take it] step by step, and [fly] by the seat of my pants. We live in a time where it is easy to capture an idea, share the files, tweak it how you want it and then present the idea… I see Kofi and the Warriors’ lifestyles and goals as similar to mine and [those of] many of my peers here. We are musicians… We are who we are, and we will do what we do.