Shonna Tucker Cooks Up Something Good 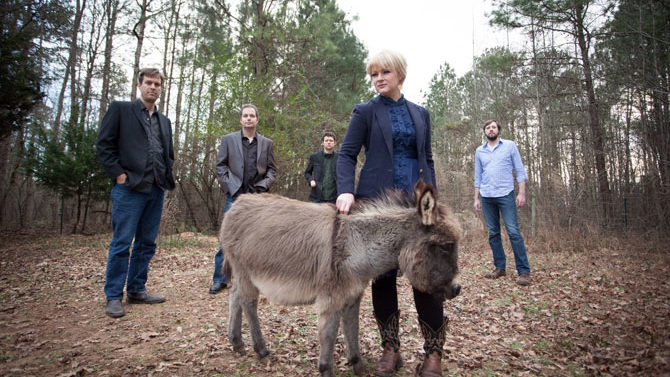 Shonna Tucker is not entirely sure where she is, geographically speaking. “We’re somewhere in Illinois,” she offers. “I have no idea, actually.”

Tucker, the former Drive-By Truckers bassist and songwriter, is on the downslope of the first-ever tour with her new band Eye Candy, a group that features names you’ll probably recognize if you’ve dipped even just a big toe into the Athens music scene: John Neff, Clay Leverett, Neil Golden and Bo Bedingfield. They are extremely capable and sought-after musicians who have been friends for years. Together with Tucker, they form a rare sort of supergroup wherein style takes a back seat to substance.

Tucker knows exactly where she is, creatively speaking. For proof, take a listen to A Tell All, the brand new album from Shonna Tucker and Eye Candy. At 10 tracks, the record—produced by local engineer and Harvey Milk drummer Kyle Spence—is a journey through Tucker’s Muscle Shoals roots. The LP melds country, soul and rock and roll in such a seamless way that the current crop of Americana bands should want to hide their faces in shame.

But Tucker’s not out to shame anyone. She’s simply doing what comes natural, and utilizing the talent surrounding her smartly, and in a way that is refreshing—for her as much as everyone else.

“I feel like I was able to spend more time than usual writing, so I feel like I made some headway there,” she says. “And the guys, of course, they’re all great musicians. And going in with Kyle to record was a fun experience… We’re all really excited to do this. It feels fresh and new, and I think that’s something I had definitely lost with the Truckers. I never took anything for granted, but it was the same thing for a long time.”

A Tell All marks the first time Tucker has seemed truly comfortable in her role as band leader, although she took center stage with the Truckers on more than one occasion. In fact, she is responsible for some of the most underrated tunes in DBT’s expansive catalog, like the slow, smoldering “I’m Sorry Huston,” from 2008’s Brighter Than Creation’s Dark, the first DBT record on which Tucker’s songwriting figured prominently.

In retrospect, though, Tucker’s songwriting didn’t quite fit the Truckers’ raucous rock mold. It was too vulnerable, too tender—too soulful.

“I cut my teeth on soul music, growing up in Muscle Shoals. I’d like to think some of that maybe rubbed off on me,” Tucker laughs.

That deep-South soul appears on A Tell All in spades. The album is largely unadorned yet lyrically complex. Closer “You Went All the Way” is a warm, pedal steel-laced love ballad that highlights Tucker’s tremendous pipes. “Your Jealousy,” the album’s catchiest, most radio-ready song, is a sharp, country-flavored mid-tempo jammer whose outlook is less optimistic.

Like Southeastern, the new album from Tucker’s ex-husband and former Truckers bandmate Jason Isbell, A Tell All comes across as a series of loosely connected snapshots that relate in varying degrees to the songwriter’s personal life. But Tucker’s album is stiller, less tortured. Its steadiness owes less to intense soul-searching and more to the outside world.

“We live out in Winterville, and we kind of have a little mini-farm,” she says. “You kind of get to a different mindset when you can just sit there and be around donkeys and chickens. You do a lot of thinking, and you can’t help but take in the calm.”

Much of the record’s charm comes from Tucker’s insistence on giving equal lyrical weight to the existential and the everyday. “I have a hard time writing about big, important things,” she says with a laugh. “I like to make simple things appear more complex than they are.” Hence songs like “Family Dinner,” which celebrates that titular ritual and all of its unspoken intricacies.

Food, more than you might expect, is integral to A Tell All. Anyone who has spent time around Tucker (or who follows her on Twitter) knows that she is a culinary enthusiast. To wit, pre-orders of the record are being shipped with copies of A Family Dinner, a PDF recipe book penned by Tucker and featuring cartoonish illustrations by local artist and musician Jack Logan.

“I’m passionate about food, and it’s something I’ve always wanted to do, to cook more and write about cooking more,” explains Tucker. “My friends tell me they like my food, so I started writing it all down. And before long, I had a ton of stuff.”

It makes a strange sort of sense; the simple satisfaction of a well-cooked dinner is not dissimilar to the pleasure of a finely crafted record. Both are capable of locating you in some cosmic and yet corporeal way, of letting you know exactly where you are.