Can Monsoon Survive the Hype? 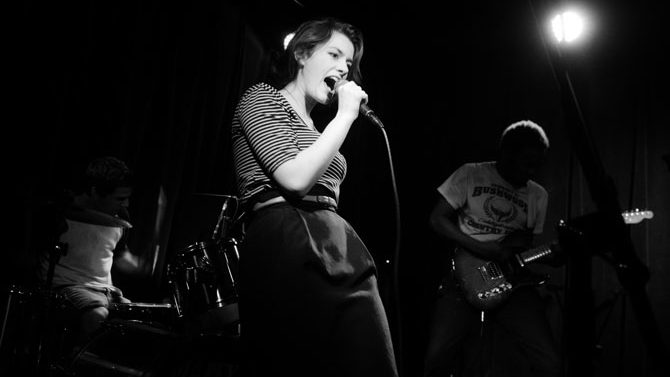 Sure, Athens audiences can be complacent and predictable. But at least a few times each year, a new band pops up on the radar that defies description to a degree that renders the statement “You’ve gotta see this band!” factual, not merely fanatical. For the past several months, that band has been Monsoon.

For some time, the music only resided inside of 17-year-old guitarist and songwriter Sienna Chandler’s mind. It wasn’t until she played an Elliott Smith tribute show last year that she even got onstage, and with a pick-up band. Having gelled nicely, this lineup played another local show of Chandler’s original material. Soon, Wuxtry Records manager Mike Turner, having seen a video of the band performing its song “Monsoon,” was calling, asking the then-unnamed group to record the tune for the store’s Record Store Day compilation.

“I can honestly say Monsoon has been an official band since the beginning of 2013,” Chandler, currently an Oconee County High School senior, says, “because we spent all of New Year’s Day recording ‘Monsoon’ for the compilation album.” The band name came from the video that Turner saw—only the song title was listed, so that’s what he referred to the group as—and, says Chandler, “it just stuck.”

Currently composed of Chandler, drummer Joey Kegel, also 17, and bassist Imorie Curry—the group’s elder statesman, at 20—Monsoon’s music has routinely been referred to in these pages and elsewhere as “post-punk,” and the term sort of works, at least in terms of tracing an imagined musical lineage in a way that makes music fans over 30 feel more comfortable.

The thing is, though, there are no cultural signifiers in the band’s music that speak toward rejecting any past or changing any future. If there’s a tradition here, it’s one Monsoon is making on its own, via multiple-tentacled excursions that touch on four-chord power-punk, Jazz Age vocal stylings and rhythms, dub reggae and 1990s alternative rock.

“I feel more inspired than I do influenced,” says Chandler. “Kristen Hersh, The Breeders, Caravan Palace, Eureka California, Stereolab, Tunabunny, The HEAP… The bands I grew up with and the bands I see here in town. I get inspired by many different things at many different times, so that’s where the wide range of sounds [in Monsoon] comes from.”

Even though her influences inform Monsoon’s style, Chandler is ambivalent about being the focal point of the band.

“We’re a three-piece, and we all have a role in the sound. I hope we are seen as equals, because we are,” she says. And she’s serious, too. “I love my bandmates… They’re both incredible at making what I have in my head come to life. [They add] dynamics, accents, changes—and [they’re] able to decipher the jumbled hand gestures I do when I’m trying to explain the mess coming from my head.”

Still, Chandler is undoubtedly the anchor on Monsoon’s roster. Specifically, her lyrics guide the group in hidden and often surprising ways. Live, the band can dash through its tunes at such a pace that what’s being sung can be lost in the immediacy of a show. But lines like, “I would save you but I know we’re gonna lose/ Devil’s gonna make an army of two/ And I know that its me and you” (“Devil’s Muse”) and “So many sailors by the sea/ Waiting for their annual greetings to proceed/ Unwrap the wires in monsoon” and “All of your friends are waiting in poison water” (“Monsoon”) prove that Chandler is blessed with the gift of poetry, something increasingly rare in the world of new music.

Since the impossibly young members of Monsoon, only in their ninth month of existence as a band proper, grace the cover of this week’s Flagpole, let’s address this now: every local band that attains a certain level of popularity will go through, for lack of a better term, a honeymoon period. Crowds get bigger, the group’s name falls from many lips and buzz steadily grows. The bands that survive this process before imploding seem to be the ones that know when to leave for a while.

Monsoon isn’t at the point of potential implosion just yet, but it’s telling that band members already have their eyes pointed outward. Currently, they’re building their live show and planning their debut recording, as well as dreaming about the open road.

“We’d love to play out of town,” says Chandler. “We’ve been asked to play in Nashville, Columbia, Philadelphia and New Jersey. But before making a trip like that, we’d really like to glue together some in-between places to make the trip work. We’d really love to play overseas, [to] see the Flickers, Caledonias and 40 Watts of Europe and Japan.”

So much can get lost in the conversation surrounding music. The argument over authenticity, including the contention that it may not even exist, has been beaten to death. Music fans can become so used to being told purity doesn’t exist that they cynically pick apart, or hyper-categorize, whatever crosses their horizon, never remembering that the major reason they were ever interested in left-field music was because it didn’t fit any specific mold.

Monsoon may very well find itself the target of such straw-grasping in the near future. But for now, the buzz surrounding the band is as pure and free-spirited as the group itself—which is one of the freshest, smartest things happening in the Classic City.