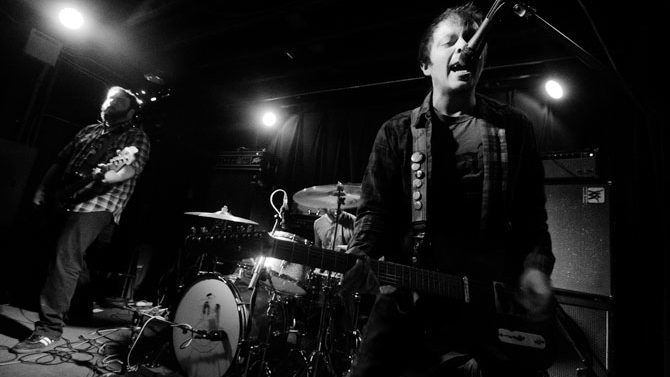 “July’s usually pretty stressful,” says Derek Wiggs in between sips of hot tea. He’s finally nearing the end of the months-long planning for SlopFest, his annual mini-festival that has taken over Little Kings Shuffle Club for one raucous and memorable weekend each of the past four years.

“I don’t even know where I’m gonna live in August,” Wiggs continues. “Between that and [SlopFest]… I don’t even have a laptop. I’ve been doing it all on my phone. My phone died for like a month—I thought I was gonna get back on the computer and have everything [be] canceled. But everyone was still on board.”

It’s this carefree DIY spirit that has made SlopFest such an anticipated event, for bands and fans alike. Since its inception in 2009 (when it sprang up as a last-minute replacement of sorts for the cancelled Athens PopFest—hence the name), the festival’s lineup has proven one of the most impressive and inclusive in town, showcasing the most buzzworthy local talent with few stylistic restrictions.

This year is no different: alongside pummeling, promising upstarts The Powder Room and the more established but no less massive-sounding Lazer/Wulf, you’ll find pop-rockers Vespolina, synth-pop outfit Grape Soda, young post-punks Monsoon and garage-folkies Little Gold, among a host of others. This year will also be the first to feature two touring bands, Louisiana’s The Lovey Dovies and The Opposable Thumbs. (See the full schedule, including set times, in this week’s Calendar.)

Wiggs explains that, while he’s ultimately in charge of booking the bands that perform at SlopFest, he takes—even expects—input from musician friends. “There are bands that, friends will be like, ‘You gotta see these guys, they’d be perfect’,” he says. “I might not have a full understanding of the band, but I’ll take a chance.”

Hence, SlopFest’s reputation as the musician’s festival in town has grown; it’s arguably a chance for bands to do their thing for other bands as much as for the crowd on hand. With no “clear mission statement,” Wiggs says, besides the desire to highlight and connect some of the most exciting groups in town, it’s become a miniature, Athens-centric version of SXSW, but without the distracting corporate presence.

In fact, though Wiggs says PBR will once again be on hand passing out swag and self-promoting—for reasons, he notes with a laugh, that are unclear to him, since the beer company’s foothold here is not likely to loosen anytime soon—each year, after the bands are paid, he quietly donates what door money is left to charity. About that: admission is a paltry $5 at the door Friday and Saturday, or you can pay $8 Friday for a wristband that gets you in both days. Thursday is free.

Since its humble beginnings, SlopFest has expanded from one to three days and now boasts over 30 bands. But it might have grown as much as it can, says Wiggs—or, at least, as much as he wants it to. Other local clubs have approached him offering to host the festival, but Wiggs says the location is as important as the music.

“This wouldn’t exist at all if I wasn’t at Little Kings when I had the idea, and they weren’t like, ‘Cool, let’s do it here’,” he says. “I feel like it’s as much a Little Kings thing as it is my thing.”

Though he jokingly complains about the amount of effort involved, Wiggs clearly remains invested in his creation. For its organizer, the festival has been a multi-year learning experience; despite the clever name, SlopFest has only become more efficient over the years. Wiggs recalls the year he finally got the hang of assigning set times (“No one wants to hear a screaming metal band outside at 7 o’clock,” he says), and this year he plans to cut the bands off at 1 a.m. instead of 2 a.m. so that the crowd, and the post-show DJs, have a chance to party down before last call.

Still, much of its appeal comes from the fact that in its fifth year, SlopFest remains as gloriously, well, sloppy as ever. One simple thing—great, interesting music—remains constant. As for the rest? There might be food, and art and other surprises, Wiggs says; he hasn’t quite locked all that down yet.