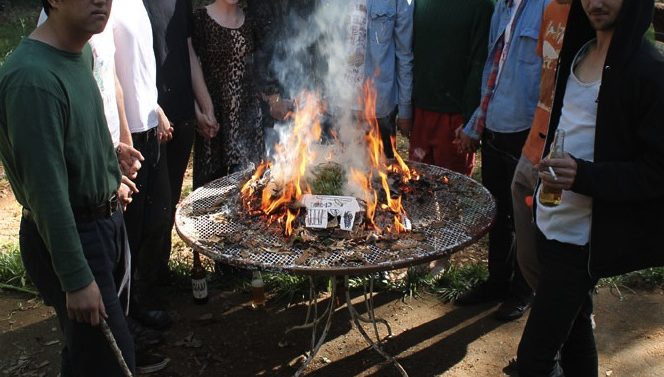 Hear some sounds from the Birdhouse on Homedrone.

Speak the words “artistic collective” in mixed company and you’ll likely get reactions ranging from hostility (the preciousness of such a thing!) to shrugged indifference. However, in Athens, your listener likely already knows somebody involved with one. And that, to turn a phrase, might make all the difference: inside baseball is a lot more fun when almost anyone can be an insider.

The latest, and perhaps most intriguing, musical collective of the past several years in Athens is the Birdhouse Collection. Its various sound tentacles—from Pretty Bird’s toe-dip into hip hop and rhythmic experimentation to Muuy Biien’s hardcore punk—all have their roots in self-propelled psychedelia and bedroom pop. Populated at its core by Pretty Bird, Muuy Biien, Green Gerry, Velocirapture, k i d s, RITVALS and Cottonmouth, this largely faceless group of artists has released tunes steadily since early 2011, but only now seems ready to take the mask off. Or, at least, to allow people a peek underneath it.

But let’s back up to the beginning. “The genesis was when we all lived together at [former laundromat] the Wash House, on Cleveland Avenue,” says k i d s mastermind Jared Collins. It has a birdhouse outside it that is exactly the shape of the house. So, we called it the Birdhouse Collection.”

The pace at which the Birdhouse records and releases music is a testament to both its restless spirit and the digital age in which it was born. As of press time, there were over 30 recordings available on Bandcamp, ranging from singles to multi-band compilations. As an example of the collective’s proficiency, newest Birdhouse inductee Velocirapture recently released a full album, Recreator, one day after deciding to put it together. (Says Winston Barbe, Velocirapture’s frontman, in his typically unassuming tone, “I decided on a Sunday to put it out, and it was on the site Monday. I had some [songs] collected and added some others I thought would be cool to put out. I plan to record and release another album in May.”)

For all its immediacy and accessibility, however, the Birdhouse Collection is slippery and largely indefinable. Recordings are released with only first name or nicknames credited, communication occasionally takes the form of unreadable, multi-colored emails and album artwork features obscured faces. When the question of willful obfuscation is posed to Collins, he says, “It started that way, I think, because we thought we were all strange. And our parents liked our bands so there was some stuff, explicit lyrics and such, that we wanted to shroud, and being shrouded lent itself to creativity. The relative anonymity frees us up to be creative. I don’t really see that changing.”

Songwriter Gerry Green, who writes and performs as Green Gerry, concurs. “I don’t think it hinders anything, really. The people who respond to it don’t know who or what’s really behind it. And, besides, most things in the Birdhouse Collection are weird as fuck, and presented as such… I guess I just enjoy the mystery. I still don’t even know everyone who’s a part of [the collective].”

Indeed, the Birdhouse is no commune: each entity is in charge of its own output. Bands record on their own, and when that’s insufficient, they head to The Glow Studio with engineer Jesse Mangum. If there’s any competition, it’s one of mutual inspiration.

“It’s definitely [been] an artistic competition, but everyone brings something completely personal and new to the table all the time,” says Collins, “whether it’s a song or a drawing or an idea or an emotion. That’s what keeps us going as a group: the will to create within a supportive community.”

The Birdhouse Collection will take over Flicker Theatre & Bar in May for a series of Wednesday night shows alternately headlined by Pretty Bird, Ritvals, Valerie and the Vaginas, Liquor Shits (the collective’s all-star country band), k i d s and Cottonmouth. The undercard for each night will be curated by the collective, and the goal is to get a budding record label off the ground. Says Collins, “All the shows will be $3, except for May 22 [which will be more], due to hosting a touring band. The shows are not free. We’re using the door money to get the label going.”

Growing pains are normal for any artist, especially when the snowball really starts rolling, and there is no shortage of egos involved with the Birdhouse. “We get in arguments, like any intense relationship,” says Collins. But successes are coming easily. “HHBTM [Records] picking up Muuy Biien is good,” he says, “and k i d s being on the Wuxtry Record Store Day compilation is good. We’ll be on the AthFest comp, too and we’ll play AthFest this year.”

Still, the collective shows no signs of falling under its own spell. There may be a brighter light shining on the Birdhouse Collection now, and that’s edifying, but Collins recognizes this as a byproduct of the collective’s activity, not the reason for it.

“We just keep on doing what we do,” he says, “and sometimes people pay attention.”