Under the Big Top with The Music Tapes 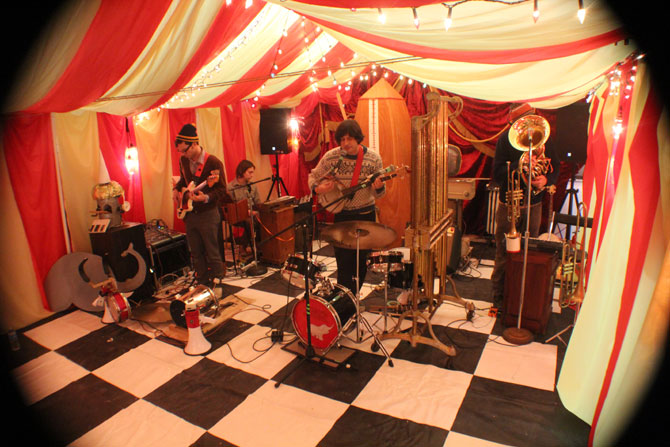 “I think the main thing to know is that it’s gonna be a very different or unusual sort of evening from the minute you walk in the door,” he says. “The structure of the evening is very different from when you normally enter a concert. Some of it is best kept secret—that’s what will make the experience fun.”

What we know is this: Koster and his band will set up a big tent inside the 40 Watt. To give a more concrete sense of how different the evening will be, the 40 Watt offers this disclaimer on its website: “We want to stress that this is a limited-capacity show. This is not an ordinary show, as the band is performing inside a tent in the venue. Tickets sold will only be for inside the tent.” Another blurb online promises an evening of “songs, stories, games, movies, magic, amusements and more.”

After years of clandestine midnight candle games, and two caroling and lullaby tours that saw the band venturing either out into the world or inside fans’ living rooms, Koster and company now have their own chance to play host. The project offers the band an opportunity to work with a much larger canvas, an opportunity that seems appropriate at this juncture.

Mary’s Voice, released last September, is both more ambitious and more cohesive than its predecessor, Music Tapes for Clouds and Tornadoes. On the new record, Koster’s eerie, compelling melodies fit more seamlessly within the music, a result of close collaboration with band member Robbie Cucciaro. And if the band’s whimsical aesthetic provokes a cynical response in some, it’s worth mentioning that Mary’s Voice is also a much darker record, emphasizing childhood and dream states, and not only their positive aspects. Still, as Koster explains, these aspects aren’t the album’s essence.

“Darkness is a part of it, but I feel the darkness is external. It’s probably more of a response to darkness.”

As for “The Traveling Imaginary,” the concept has been with Koster for some time.

“The whole idea came from something I conceived a very long time ago, when I was living on an island in Maine,” he says. Now, set to tour in support of a new record, “We decided to make this thing happen for real, in a form that could travel.” Concrete preparations began last summer, backed by a highly successful Kickstarter campaign, where donations exceeded the band’s goal three times over.

Setting it all up, though, has proven to be quite an undertaking. The Kickstarter page makes mention of “historic tentmakers in England,” and Koster explains that “all the different parts were built independently.”

Two unannounced shows last year, in Connecticut and Massachusetts, offered a first glimpse of the project. The impetus for the sneak previews was, in part, practical—“the tent is too big to set up anyplace we usually rehearse,” Koster explains—but both evenings were successful.

“We didn’t have everything, but we had… several large elements of it,” Koster says of the preview shows. His account hints at the grand scale of the main event.

The two Athens performances will mark the first official performances of “The Traveling Imaginary,” and will kick off a month-long tour, with more substantial travel planned for later this year.

The goal of a performance as involved and unconventional as this one, a performance that departs from the typical rock concert script, is, at its root, transportive. It seems The Music Tapes’ intention is to create a cohesive, self-contained experience. But as ambitious as it is, the project is not naïve, nor is the music.