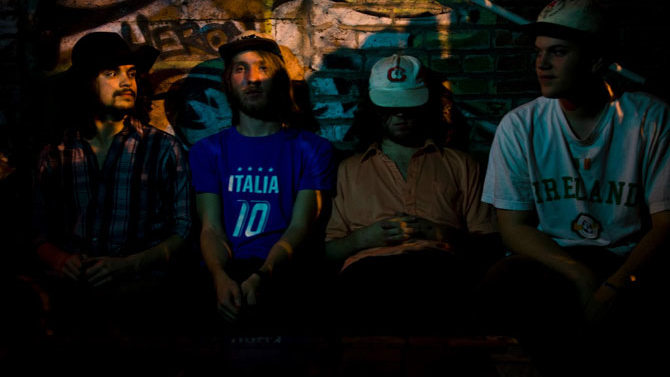 New Madrid is a study in contrasts. Its members are painfully green but come across as impossibly seasoned, their collective attitude at once bright-eyed and more realistic than most. The band’s music is both earthy and interstellar, sweet, simple Southern rock blasted into the ionosphere. With its new album, Yardboatâ€”a promising record laden with youthful missteps that verify its humannessâ€”the group makes its debut into Athens music society.

Folks elsewhere have noticed, too. When a reporter for a North Carolina daily breathlessly rang the Flagpole office one recent morning, he wasn’t calling to trade media strategies (mainly because that’s not a thing that happens) but rather to inquire about the band he had just heard on a local radio station. Who, he demanded, was this New Madrid?

It was a good question. Though the group’s core has been collaborating for several years, it has only recently solidified into a living, breathing unit. In fact, most of the writing that birthed Yardboat was accomplished while most bandmembers, all friends since high school, weren’t even living in the same city.

“Some of the songs on there are five years old,” says singer and guitarist Phil McGill. “Other songs have kinda just bubbled up over the last two years.”

While McGill has called Athens home for a while now, the group’s remaining three membersâ€”Graham Powers, Ben Hackett and Alex Woolleyâ€”only moved to the Classic City in August (Hackett and Woolley from Nashville; Powers from Chattanooga).

Yardboat bears the signs of fracture. Early songs like “Bee Rapture” and “Magnetoception” are rootsy, stadium-ready rockers that sport heavy My Morning Jacket vibes; “Juniper,” while similarly reverbed-outâ€”there is no shortage of the shimmery stuff on Yardboat; too often it feels like a crutchâ€”is an easy folk tune that takes an entirely different approach. And then there’s “Pond,” the 10-minute ambient instrumental, startling in its poise but by all accounts out of place.

Despite the record’s flaws, it exhibits the beautiful inconsistency of a group brimming with ideas. Perhaps tellingly, these guys are reluctant to name any one influence, instead rattling off a list of what they have been listening to in the van lately. (Hank Williams, Spiritualized, David Byrne and Ken Burns’ “Jazz” soundtrack come up, a list that does make a weird sort of sense once you hear New Madrid’s music.)

“It definitely has a regional [feel] to it,” McGill says of Yardboat. But what really informed the album, he says, was “growing up in the age of BitTorrent and Internet radio, and having a constant flow of everything.”

Hackett recalls, “There was one summer where it was Phil, Graham and [me] in Chattanooga, and Alex was up in Nashville. So, we would get together to play music, and there wasn’t a steady rhythm component. That was when we sort of delved into, well, what can we do with what we’ve got?”

Hence “Pond,” and the band’s obvious affinity for texture and spaceâ€”areas New Madrid plans to develop further going forward. The main goal, bandmembers all agree, is “taking time” on any new material (Yardboat, the piecemeal product of years of songwriting, was recorded in only three days) and harnessing the power of a truly collaborative mindset, something that’s possible now that the band is collected in one spot.

In keeping with its style, New Madrid’s approach to touring and promotion is both archaic and ultramodern. With no booking agent, record label or publicist, and no desire for any of the above (at least for now), the band aims to build its brand by playing steady regional gigs before attempting any big leap.

It’s the classic DIY ethos, emboldened by an Internet-era sense of connectivity and exhibited by a group of talented and committed dudes. There is no shortage of confidence in the New Madrid camp, although, nor is there a glimmer of bravado. This is a group that knows its limitations and thrives because of them, that will continue to develop until, simply, it cannot. That seems a long way off.