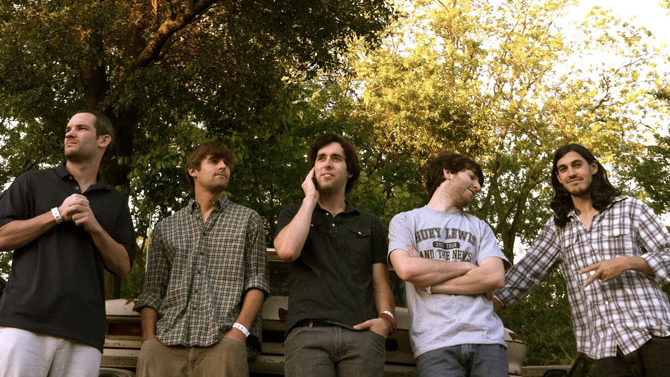 After two-and-a-half years, two EP releases and a sizable amount of touring, The District Attorneys are ready to release their first full-length album. Slowburner is the product of a continually collaborative group, with members evenly split between Atlanta and Athens, where no single songwriter dictates. Stylistically, they bridge the gaps between classic rock, Americana and indie. (See our full review of the record on p. XX.)

This stew comes courtesy of everyone putting his fingerprint on whatever he brings to the table. Guitarist, vocalist and keyboardist Drew Beskin says, â€œWe want to evolve as songwriters and make the best records possibleâ€¦ There’s a song on the record named ‘California Fire,’ and when I wrote it I meant for it to be very floor tom-heavy with a driving beat. Then Walker [Beard] started strumming it more like a Tom Petty type of thing, T.J. [Mimbs] came up with a slide-guitar part, and it completely changed [the song].â€

Bands that feature too many stylistic differences, though, tend to have the problem of listeners not really being able to grab hold of anything. There tends to be no focal point or easily discernible label to throw around. Beskin agrees somewhat, but says, â€œI usually describe it as indie-pop because I like pop songs more in general, and if you throw that word ‘indie’ on there, it gives you a lot of range. The songs are really all different, but I think they all fall under the category of what we define as popâ€¦ As long as the songs are all digestible but not too sugar-coated, I feel like we’ve done our job.â€

The District Attorneys see this approach as more of a positive than potential stumbling-block, as it reflects who the band is as opposed to shoehorning it into a specific category. â€œTo us, the record feels very coherent,â€œ Beskin says. â€œWe all like a bunch of different stuff and different types of artists, and we all write very different types of songs all the time. We kind of want our records to speak to that. We don’t want to make a record that’s just one particular thing.â€

Last month The DAs took an inaugural trip to South by Southwest and learned firsthand what it means to be a band trying to navigate the event. Although playing shows as an â€œunofficialâ€ band, they managed to perform each day of the music festival, often with wildly different results.

â€œThat was our first trip there, and it was very hectic. Even booking the shows was pretty stressful. But it turned out great,â€ says Beskin. â€œWe got to play our label [This American Music] showcase with some of our favorite bands, like The Arkells, The Polliesâ€”which has Jason Isbell’s former lead guitarist as front manâ€”and then Glossary and Jonny Corndawg.â€ But, he says, â€œThere were definitely one or two shows we had no business being at. We showed up to one that was seven miles away from everything that was going on, and the band that was playing before us was doing a Yellowcard cover.â€

Although three members of the band are still in school, the group is committed to being on the road as much as possible and will head out in support of Slowburner this summer. â€œWe’re gonna try to book the smartest tour we can. You know, a tour where we think we can hit the most people and, hopefully, make the best out of it and get the record out to as many people as possible.â€