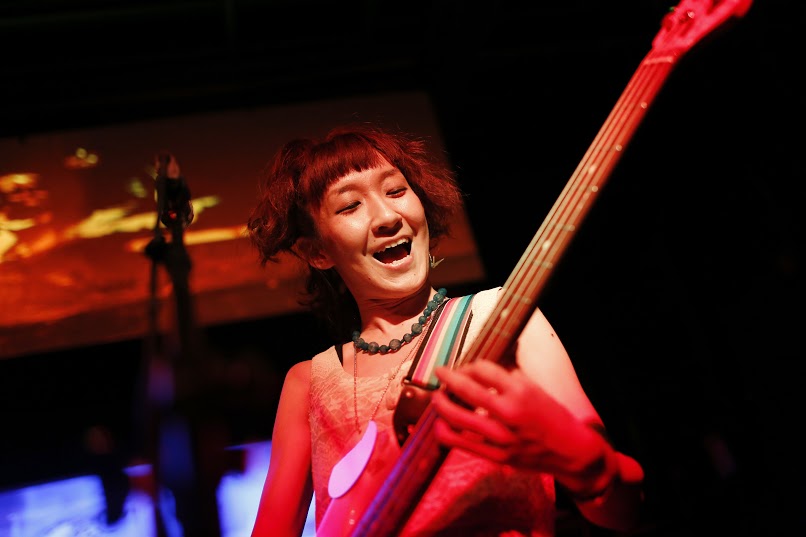 Slingshot‘s lineup was wildly varied, featuring dozens of artists linked only by what festival director Kai Riedl termed a boundary-pushing attitude towards their music. Electronica, or something like it, held steady throughout the festival’s schedule, though the music at Slingshot was worlds apart from the EDM craze that’s taken over the pop mainstream.

Flagpole‘s correspondents spent the weekend soaking up as many Slingshot sounds as they could. Here’s what happened:

The fest got off to an inauspicious start with a sparsely attended Ryley Walker show at the Georgia Theatre. The 25-year-old singer-songwriter ran through a few numbers from his excellent new album, Primrose Green. Without the anchorlike backing of the free-jazz session greats who appear on the record, Walker’s set occasionally felt aimless. Still, it was charmingly ragged; the singer peppered the songs with consonantless vocal grunts, which pierced through the pretty, perplexing acoustic fog.

The action, and the crowd, were at Live Wire, where the popular Japan Nite touring series was in full swing. All-female pop-punk group Tsu Shi Ma Mi Re married virtuosic musicianship with a playful attitude and charming stage banter. ZARIGANI$ put on an instantly infectious new-wave dance party. Peelander-Z, as always, brought the house down with their combination of body-sacrificing stage antics and razor-wire punk.

At the 40 Watt, the order of performers had been changed at the last minute—an unfortunate trend that would persist throughout the weekend. I had hoped to catch UK techno star Clark at 11 p.m., but was greeted with the hazy stoner-wave jams of Nosaj Thing, instead. Not the world’s worst consolation prize. [Gabe Vodicka] 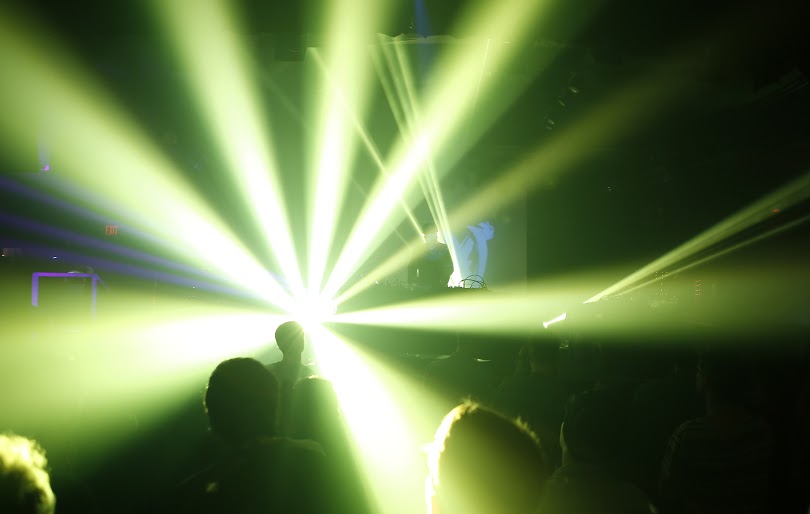 Producer Skylar Spence’s set was 30-or-so minutes of unflinching joy. While Spence played and danced around to a lot of fantastic original beats, as well as some incredible Drake and Mariah Carey remixes, it was his time on the mic that made his set something special. Spence is relatively new to the idea of singing his own material, so it was surprising how natural he sounded belting out catchy pop tunes.

Reptar’s headlining set at the Georgia Theatre on Friday was heavy on new material but light on the raucous energy that has come to define the band’s live show over the past several years, for better or worse. The new songs are some of the best of their short career, more concerned with being introspective and interesting than providing a catchy hook. The group also had an impressive stage setup, with lightbar-windmills and giant bouncing balloons. However, new material is new material, and it’s going to take some time for fans to become accustomed to this stuff. The half-capacity crowd did their best to dance along and engage with the unfamiliar tunes. [Nathan Kerce] 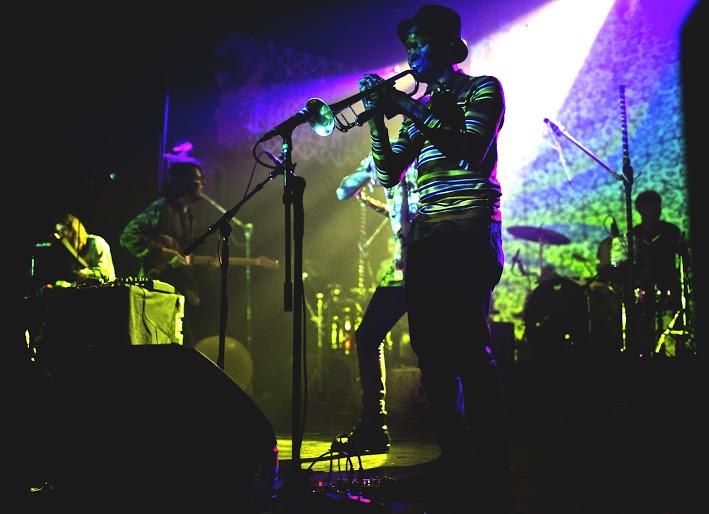 It had been quite a while since I had caught The Viking Progress around town. Patrick Morales has arranged his project in a number of ways since its inception, but his solo set at Hendershot’s captured the essence of his songs well. When Ruby the Rabbitfoot hit the stage, the crowd swelled. From the get-go, it was nice to see Ruby trying a more aggressive approach to her typical soft pop. Danger Mouse and Michael Stipe were both in attendance for Ruby’s set—the rest of the packed house seemed to enjoy what they were hearing, as well.

I made my way over to the 40 Watt to catch Holly Herndon. At times, her electronic compositions veered into pulsating club rhythms. At other times, noise won out, featuring abrasive, unexpected sounds that seemed to have no coherence. Herndon’s video-projected accompaniment was equally mesmerizing, showcasing a surreal sensory-overload swirl of images relating to modern technology. I found Herndon’s set incredibly compelling, if for no other reason that it struck me as an incredibly advanced critique of culture by way of mixed-media performance.

Although the crowd for Wilco drummer Glenn Kotche‘s set was chatty, Kotche maintained a razor focus on the minute details of his compositions, calling on sirens, springs, cricket boxes and other odd objects. Later in his too-short set, Kotche managed to hush the audience when he invoked a piece by avant-garde composer John Zorn. Using a few brushes and what appeared to be metal plates, Kotche grinned as crowd looked on in awe. Kotche closed his set with a powerful rendition of “Projections of What Might,” from his 2006 release, Mobile.

I wandered over to The World Famous’ tiny listening room and squeezed my way in to catch Powerkompany’s set. It was impressive to see the group (led by Marie Davon and her husband, Andrew Heaton), rely on a rotating cast of characters, bringing in cellos, background vocals and a trombone. Powerkompany has a fantastic new record in the can; songs such as “Can’t Cry” and “Do I Have To Dance All Night” carry the group into dance-y territory while maintaining an up-the-gut sensibility. [Dan Mistich] 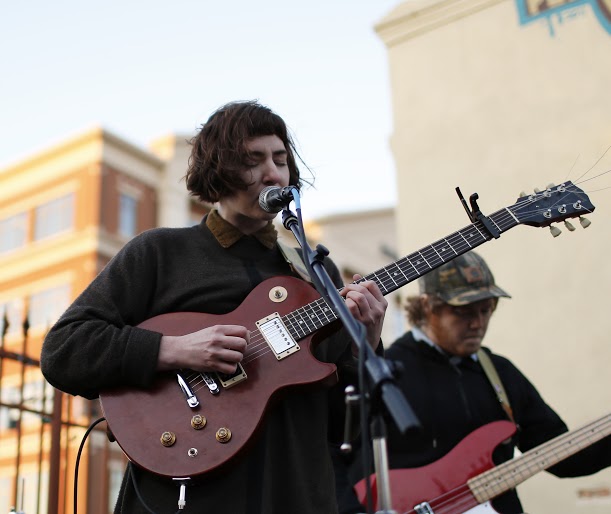 It’s difficult to succinctly capture the gravity of Saturday’s Georgia Theatre lineup, the most buzzworthy showcase at this year’s Slingshot. Michael Lachowski of Pylon started the evening with a DJ set for a sparse but growing crowd. Lachowski was rarely visible, preferring instead to stay in the shadows for most of his time onstage before giving away to DJ Windows 98.

Rather than simply spinning a playlist, Win Butler and company focused on creating moods for the audience. Butler was joined by two percussionists, who looked more like they were from the Fifth Element universe than planet Earth. On an unrelated note: Win Butler may be the most freakishly tall DJ I have seen. 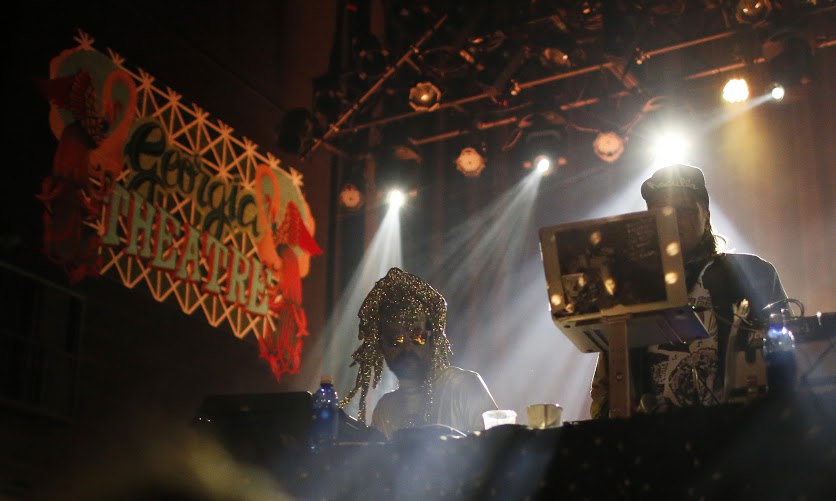 Given the wide range of work that fills James Murphy’s post-LCD Soundsystem resume, it was hard to have any expectations about his headlining set. Although Murphy displayed an expertise for working the crowd, his set was especially dynamic, moving from elements of trance to more traditional club-inspired sonics. The huge crowd burst into collective fits of convulsions on several occasions; the moving bodies were an extra-linguistic endorsement of Slingshot itself. [Dan Mistich]