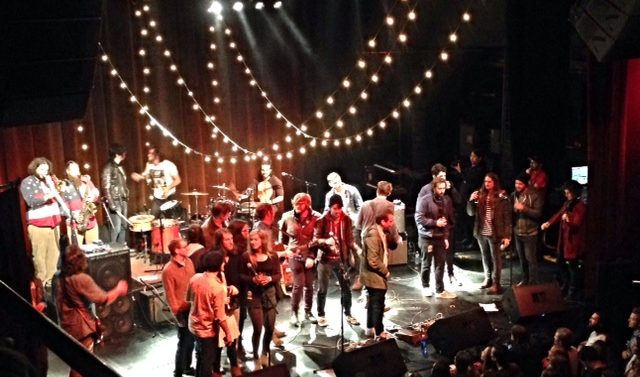 A beanie-clad audience braved the cold to see the coziest welcome-home party of the new year Friday, featuring one of the best lineups of folk-rock Athens has to offer.

Semicircle was the first to take stage, setting the mood with minimalist instrumentals and an organically cool vibe. The group, which features two members of Reptar, announced that their newest album, Blown Breeze, Grown Grass and We Are Part of the Earth (Flagpole review) was available on vinyl for the first time.

People continued to trickle in to the Georgia Theatre as Roadkill Ghost Choir started their set, which was both rowdy and saturated with warm slide guitar. Singer Andrew Shepard commanded the audience from behind a curtain of long hair; the band banged out a strikingly faithful cover of Nirvana’s “Breed” to wrap things up.

The crowd noise dulled to a low hum as Family and Friends began. Strands of light illuminated the stage; the opening lyrics, “I’ve got your love/ I won’t let it go to waste,” were not lost on the adoring audience.

The two-hour set featured the entirety of Love You Mean It, the band’s first EP, released exactly one year prior to Friday’s show, as well as songs from an upcoming release.  From the stand-up bass to drummer Ryan Houchen’s monkey onesie, Family and Friends oozed quirky charm. At the core of the folk outfit’s effervescent sound were its dualing drummers, who acted as the heartbeat of the band.

The group closed out its official set with “Family and Friends,” but was soon joined on stage by Semicircle and Roadkill Ghost Choir for a souped-up encore rendition of “With A Little Help From My Friends.” As the unofficial anniversary show ended, MacDonald gave one final address to his fans: “I hope we will be in this same place a year from now.”