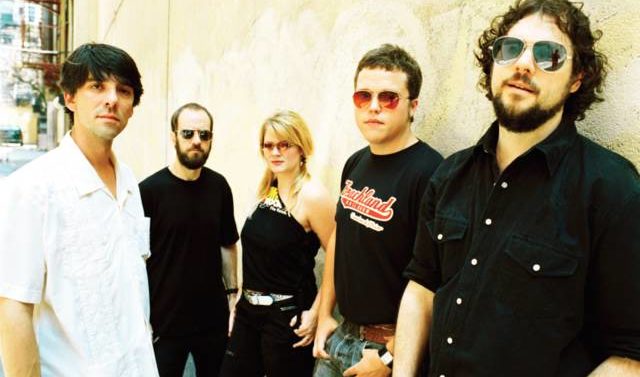 Jason Isbell (second from right) with Drive-By Truckers circa 2004

Here’s a bit of news that should make Drive-By Truckers fans more than a little happy: On Sunday, June 15, songwriters Patterson Hood and Mike Cooley will reunite with former bandmate Jason Isbell for a full collaborative set at the Shoals Theatre in Florence, AL.

Isbell was responsible for some of the Truckers’ most beloved songs, including “Outfit” and “Goddamn Lonely Love,” but left the band in 2007 and has since enjoyed a fruitful solo career, appearing publicly with his former bandmates only occasionally. His latest LP, the highly acclaimed Southeastern, chronicled his battles with alcoholism and his budding relationship with now-wife Amanda Shires.

The June 15 show is a benefit for Terry Pace, a longtime friend of the Truckers and one of Alabama’s leading music historians.

From the press release:

Pace suffered two debilitating strokes in March which required several weeks of hospitalization in Birmingham. He was recently released from the hospital and is recovering at his home in Sheffield. Rehabilitation will be a long, expensive process and the medical costs continue to mount. Prior to his illness, Pace was the director of UNA’s Office of Communications and Marketing. For the past eight years, he taught freshman composition and sophomore literature in the UNA Department of English. He also led classes on film appreciation and the history of Muscle Shoals music.

The June benefit is the brainchild of Jayne Jackson, event coordinator at UNA. “I knew the community would want to do something to help Terry. There is so much love for him here. The simple fact that these three prominent artists are coming off the road during heavy touring to do this show on a night off sends a significant message of love and respect. Terry has helped a lot of people through the years and now people want to give back to him.”

For the past 30 years Pace has been a central figure in local music and theatrical circles. He is an actor, director, producer, lecturer and music historian who has been active in supporting and writing about the Muscle Shoals music scene.

Tickets are $30 in advance or $75 for the VIP version, which includes a meet-and-greet with the three songwriters, and available here.

I Am the World Trade Center to Reunite for AthFest