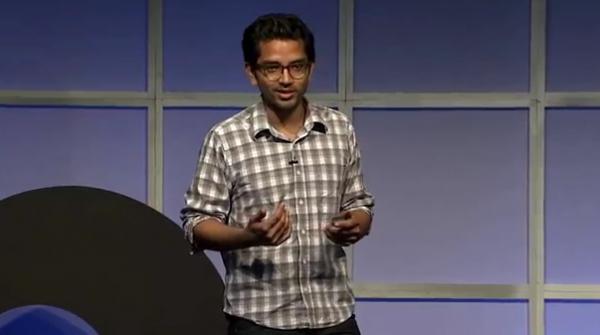 Brands of all sizes populate SXSW, and the biggest ones populate it the most. Same as it ever was, right? This year’s Spotify House features three stages, a house DJ and has so far hosted shows from Phantogram, Dum Dum Girls, Future Islands, Warpaint, Holy Child and more. The hours-long lines to get in start happening at noon each day and don’t let up. Snoop Dogg showed up yesterday. The company could have easily rented a space three times the size of the small-ish corner lot they’re occupying this week, and they’d still have lines, I’m sure.

It can’t be just the lineup. These same bands are playing multiple locations. And it can’t just be because SXSW is overrun with people. Plenty of parties and shows thrown by less-heeled companies are barren even at prime time. I suspect it has mostly to do with brand identity and the way we consume entertainment. People don’t simply patronize a company: They’re encouraged to form a sort of quasi-relationship by “liking” it. People don’t write letters of complaint: They tweet out their dirty laundry. And people don’t just go see one of 10 shows Future Islands is playing: They see them at Spotify House.

The idea of cutting through the clutter of the streaming music market was kind of a novel idea, until Spotify managed to do it, and monetize it, too. The Swedish firm established itself solidly in the European market before expanding to the United States, which Sachin Doshi, head of Spotify’s content and distribution, rightly defines as the largest music market in the world.

Much has been said—from some prominent Athenians, even—about Spotify and its artist compensation. I spoke with Doshi for several minutes yesterday specifically about that.

Flagpole: As you know there’s been some controversy, if not outright criticism, about Spotify’s supposedly low artist payouts. But it’s been my understanding that the American market is largely partaking of the free service and not the paid subscription model. Is that true?

Sachin Doshi: That’s actually not true. We’ve done a good job of converting. While we don’t make the numbers public, specifically the U.S. numbers, and it hasn’t reached the paid penetration we have in Sweden, where approximately 20 percent of the population pays, our ability to convert users in America is just as strong.

What methods do you use to make the conversion?

It’s a couple of things. Obviously, our premium product has more features than our free product. We launched a new mobile product in December that significantly lacks some features of the paid product, like on-demand streaming [and] the ability to download tracks onto your device and listen offline—and it’s also ad-supported. We’ll message users when they try to do things that they can’t do unless they’re premium users, and try to upsell them with a free 48-hour trial, and then they have to enter their credit card info.

The feeling was that you cannot get a user to pay for music again without offering a viable free solution. We live in that world now.

Our data continues to show that after users use the service for a while—whether that’s threemonths, a year, 18 months—they convert for their own reasons over time. The best way to get them to convert is to get them to invest in the service first. It’s really hard to get someone to just put down a credit card immediately.

What the average time it takes someone to convert?

Has there been any outreach to artists to encourage their fans to switch to the paid model?

You know, we obviously encourage our artists to push Spotify, but, honestly, I think we feel that the [business] funnel is strong enough that we don’t need them to [encourage premium conversion] right off the bat. As long as we get [users] to engage with Spotify on some level, they’ll convert just through the mechanics of our service. For some artists, we’ve run pre-release previews of things before they’re even on iTunes for premium customers only, but those are rare occasions.

Is the metric used to pay artists the same with the paid model as the free model?

The revenue share is the same, so the percentages that go out are the same. More of our revenue comes from our paying users, so that’s why the numbers look a little bit different on the premium streams versus other streams. [Translation: Artists make more money the more premium users there are in a given market.]

I understand that Spotify pays out 70 percent of its revenue to artists.

That includes the master [rights holder] and the publishing.

There are actually artists, even small indie artists, earning a fairly good living from Spotify.

Yeah, absolutely. Look, we launched first in the Nordic Scandinavian territories, and our growth there has been remarkable. We’ve managed to grow the [music] business there in ways that hadn’t been seen in years. That’s largely based on the fact that we’ve gotten the [paid] model to grow through the free service. We represent a majority of the Swedish record business, and it’s paying out the same as the CD and download business was paying out.

The skepticism in the U.S… Again, we’re much newer [than other services]. I think as we continue to grow and, frankly, as we’re allowed to have direct discussions and engage those artists that are skeptical, [they will come around]. We’ve managed to show them the data and explain why the model works and why it’s good for them. By and large, that’s worked at getting them to support the service.

What strategies did Spotify use in the very beginning to distinguish itself in a crowded streaming market?

It’s was the “free” business. Piracy was rampant. As streaming was growing, it was doing so in sort of grey avenues like YouTube, and the feeling was that you cannot get a user to pay for music again without offering a viable free solution. We live in that world now. Whether we like it or not, whether we want to acknowledge it or not, that’s the world, especially that younger consumers live in. The only way to get them to understand why they should be paying again is to give them a viable free service.